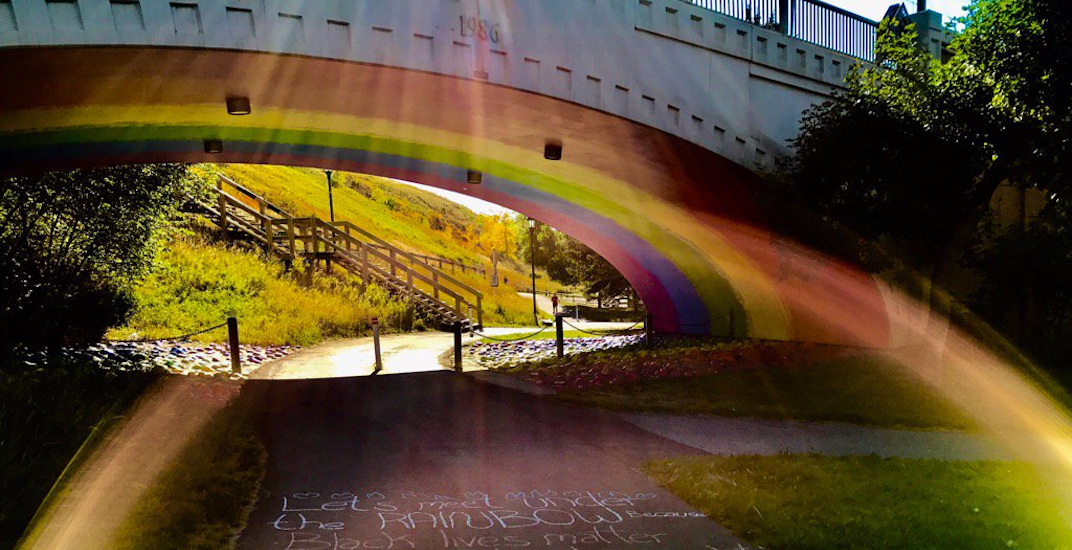 The LRT bridge by Riley Park has gotten a facelift just in time for Calgary Pride, as an arching rainbow now sits over its walkway.

The public art is an Activate YYC project that saw the ground-facing arch painted six colours of the rainbow. Along with the cement, the stones directly underneath were given corresponding colour for a very satisfying effect.

Spotted this clever bit of street art in recognition and celebration of Calgary Pride week, on my ride to Kensington tonight. Off to enjoy a few patio pints on this glorious summers eve. #iamdowntown #kensington #yyc #art #streetart #pride2017 #yycpride #loveislove #community

On the trail leading up to the bridge, someone wrote in rainbow chalk an inspiring message.

While the new colours were only put up earlier this week, many Calgarians have discovered the new rainbow and have been eager to share it over social media.

Sneak peak to an #ActivateYYC project near sunny side station! 🌈 pic.twitter.com/wVmmBhHO2a

What a vibrant and beautiful addition to the Kensington neighborhood! 🌈 Kensington would like to wish everyone a safe and happy Pride week!

Rainbow Bridge, guerrilla urbanism at its best. Put up by local area residents over an afternoon this weekend. “Cities have the capability of providing something for everybody, only because, and only when, they are created by everyone” – Jane Jacobs #yycpride #design #urbanism #calgary #yyc #yycnow #architecture #pride #travel #yycliving