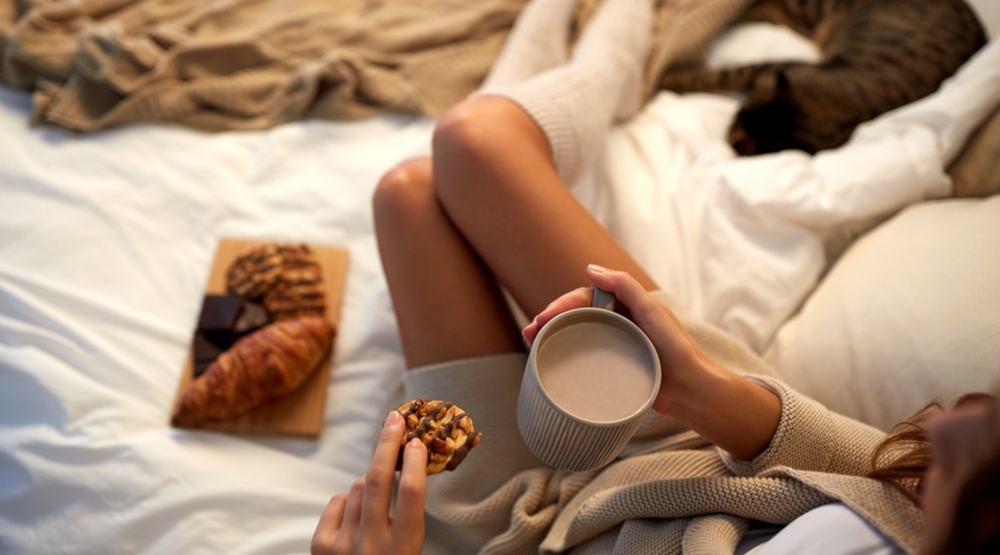 Rafting is a weekend sport.

And, contrary to what its name suggests, it has nothing to do with barreling down a rushing waterway on an inflatable.

In fact, rafting is not even weather-reliant. It takes place indoors. It requires minimal pre-planning and zero special equipment or ability.

The premise is simple: You spend all day in bed; eating, drinking, watching movies, making out, whatever. Just keep imagining that the “floor is lava” and you’ll do fine.

I didn’t invent it. The idea was passed down by some sage friends, but it’s since become a cherished tradition. I couldn’t have been more delighted to discover that Top Chef judge Padma Lakshmi is also a practitioner.

She calls it a bed picnic and describes her longstanding ritual on a recently released episode of Hot Ones by First We Feast [1:45].

“It’s basically when you get up in the morning, you make your bed, you have a shower, you put on a pair of crisp pyjamas or whatever you like, and then you make a bunch of different sandwiches and you cut them nicely and you pretty much create a platter of sandwiches… make a huge pot of tea, and maybe even [do] a marathon of some show you like.”

To which Lakshmi gracefully responds, “You actually think of it as the activity so you feel no guilt or shame it’s not like oooh I was such a schlub today and I just stayed home, you say, no I’m having a bed picnic.”

I like to swear off cooking for the day too – so, no sandwich platters – though a trip to the grocery store in advance is recommended just to stock up on provisions; booze, a crossword puzzle, snacks.

Relying entirely on delivery during a spontaneous rafting session is totally acceptable too… It might not be as dignified but it’s totally on-theme.

Most important to Rafting is the intent behind it. Intend to do nothing, and then really do it.