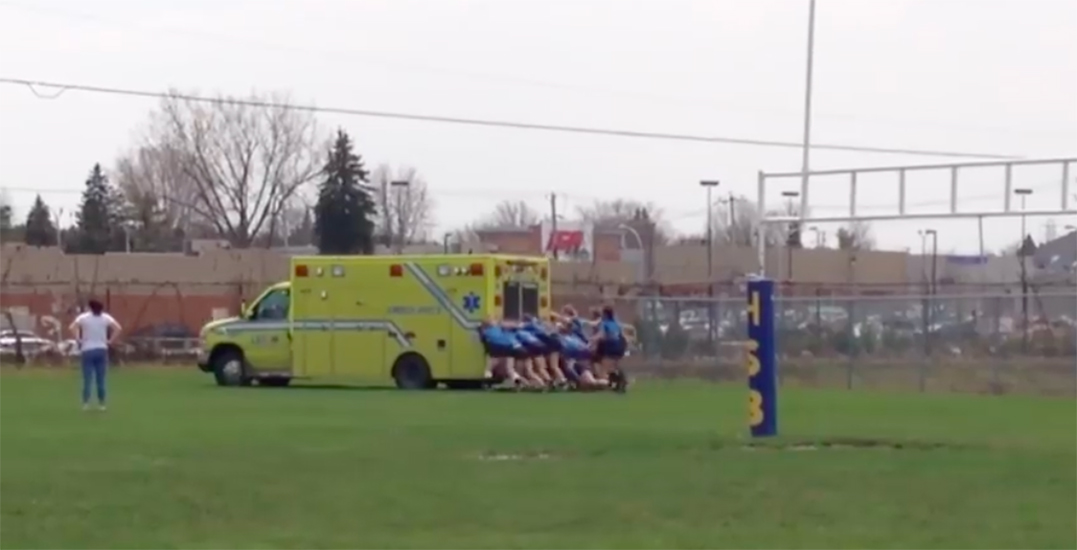 It was a heartwarming display of teamwork and camaraderie, not to mention a remarkable display of strength and heart.

On Wednesday, May 2, 2018, the Châteauguay Valley Regional (CVR) High School Rugby team took on the Howard S. Billings Juvenile girls in their first game of the season.

After what was called a “very brave sprint” and an attempt to tackle an opposing player, a player from CVR went down hard and suffered a serious injury that left her immobile. Laua Ykema, who posted the Facebook video, described that there was “no movement from said girl” as both teams took a knee out of respect.

When the ambulance arrived, the unit struggled to make its way onto the field, as the terrain was wet and muddy from the rain and play.

After loading the girl up into the ambulance, the vehicle attempted to take off but was stuck in the mud with spinning tires. According to Ykema, “before the crowd could even realize what was going on, with no hesitation, the entire team ran over” and pushed the vehicle until it started moving.

Not only does the video reveal the heartwarming bond between teammates and a relentless amount of heart, but there’s a remarkable amount of strength to be seen. Ykema comments that the machine weighed approximately 12,000 lbs, yet the video shows the CVR girls team move it in mere seconds.

Although the girls ended up losing the game (26-17), it’s needless to say that every spectator and athlete present was proud of the team spirit displayed.