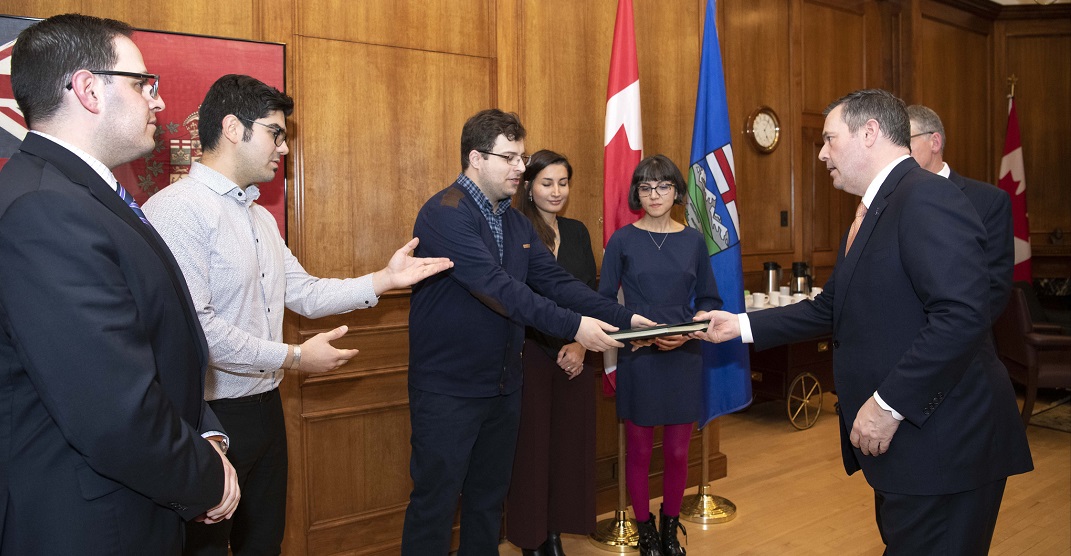 Premier Jason Kenney delivers a book of condolences from Albertans to members of the Iranian Community, following the tragedy of Ukrainian International Airlines Flight 752. (Province of Alberta)

On January 8, 57 Canadians died when Ukranian International Airlines Flight 752 was shot down by the Iranian military.

A total of 15 Albertans died as a result of the tragic event, and the Province of Alberta has now announced that it is contributing towards a scholarship to commemorate those who lost their lives.

A total of $250,000 will be contributed to the University of Alberta’s Mojgan Daneshmand, Pedram Mousavi and Victims of Flight PS752 Memorial Fund “which will be a lasting tribute to the 10 crash victims who were University of Alberta faculty, students, alumni or family,” the release states.

“Albertans across the province were generous with their condolences to this tragedy,” said Alberta Premier Jason Kenney in the release.

“I hope their kind and compassionate messages, along with the new scholarship, will be powerful acts of healing for Alberta’s close-knit Persian community. My thanks go to everyone who shared their hearts with those affected by the Flight 752 disaster.”

Those messages were gathered together into a book that Kenney presented to Alberta’s Iranian community on Tuesday.

“My thanks go to the University of Alberta for sponsoring this scholarship,” said Minister of Advanced Education Demetrios Nicolaides in the release.

“It will be a lasting memorial to the 10 precious members of the university community. This is a beautiful way to honour their commitment to education, research, mentoring, and vision, and will keep their memory alive for future generations.”