Nothing says a taste of Canada like poutine, which is perhaps why the White House has a twist on the Quebecois classic on their menu for tonight’s state dinner honouring Prime Minister Justin Trudeau.

White House Executive Chef Cristeta Comerford will have a “more formal take on the fast food,” notes the Washington Post served up as a single bite canapé, featuring “shavings of smoked duck and cheese curds finished with red wine gravy and served on delicate wafer fries.”

It’s hard to imagine poutine as a delicate food–it’s more for soaking up the suds after a night of indulgence, complete with some necessary finger licking (let’s keep it real). The White House happens to be coming close to the spirit of the food, however, by serving dinner at an elegantly late 8:40 p.m.

The rest of the menu, however, is a showcase of American ingredients and the best of the burgeoning spring season. From the official menu notes, courtesy the White House:

“The Canada State Dinner features an array of ingredients from the Pacific Northwest to the Atlantic Coast. With a mindfulness to the coming of spring, White House Executive Chef Cris Comerford and Executive Pastry Chef Susie Morrison will present dishes highlighting elements of the season and the best of America’s farms and seas. Dinner and dessert will be served on the Obama China Service.”

Lest it seem the only bit of Canada in the food is the poutine, the lamb course will feature something Canadians know well: Whisky. “As a finishing touch, the dish is drizzled with Yukon Jack Canadian Whisky,” reads the menu notes. Damn, just a drizzle? Perhaps the Trudeaus and Obamas will enjoy further sips–in the name of international harmony, of course–after dinner.

“Canada and the United States share the same values, the same origins, and the same space. We face many of the same challenges, and we are all better off when we tackle them together,” Prime Minister Trudeau said in a release issued today. Tonight they tackle dinner, with a side of diplomacy.

Here’s the full menu, which will probably make your own humble dinner plans seem a little meh in comparison: 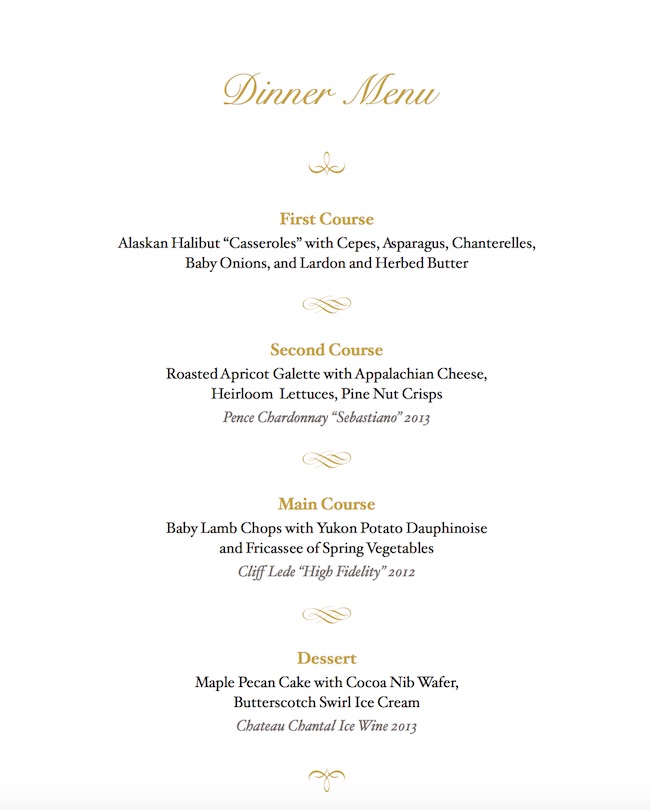