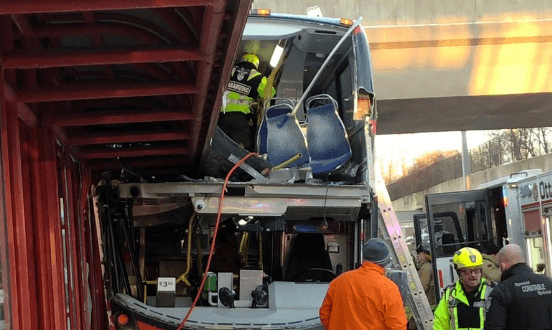 Three people were killed and 23 others were injured just before rush hour on Friday after a double-decker bus crashed at a busy transit station in Ottawa.

Paramedics said some of the passengers on the OC Transpo bus suffered critical injuries.

Westboro: Confirming 17 patients injured in the collision. Some in critical condition. Further updates to follow. #Ottnews.

Ottawa Emergency Services transported the injured from Westboro Station to a local hospital. Pictures posted to social media show a large presence of first responders at the busy transit station, and substantial damage to the front end of the bus.

Injured passengers were being treated by paramedics on the ground surrounding the bus.

In a press conference, Ottawa’s Police Chief said the most serious injuries involved people sitting on the second-level of the bus.

I was shocked to hear of this horrific incident at Westboro Station. My first thoughts are with those who have been injured and their families. I have asked staff to ensure all necessary resources are made available to assist them through this difficult time. 1/2

Ottawa Police said in a statement its collision investigation unit was on scene and is investigating. The department said it would provide further information shortly.

Part of the Transitway, a main artery for commuters, was closed in the aftermath of the accident, and police warned people to stay away from the area.  The station was deemed an “active emergency site” and all buses have been re-routed.

Serious incident at the OC Transpo Westboro station. Huge amount of first responders in the area. Massive damage the front of a bus – as well as a few people laying on the ground. #ottawa #ottnews #otttraffic pic.twitter.com/KoMd4zGVDh