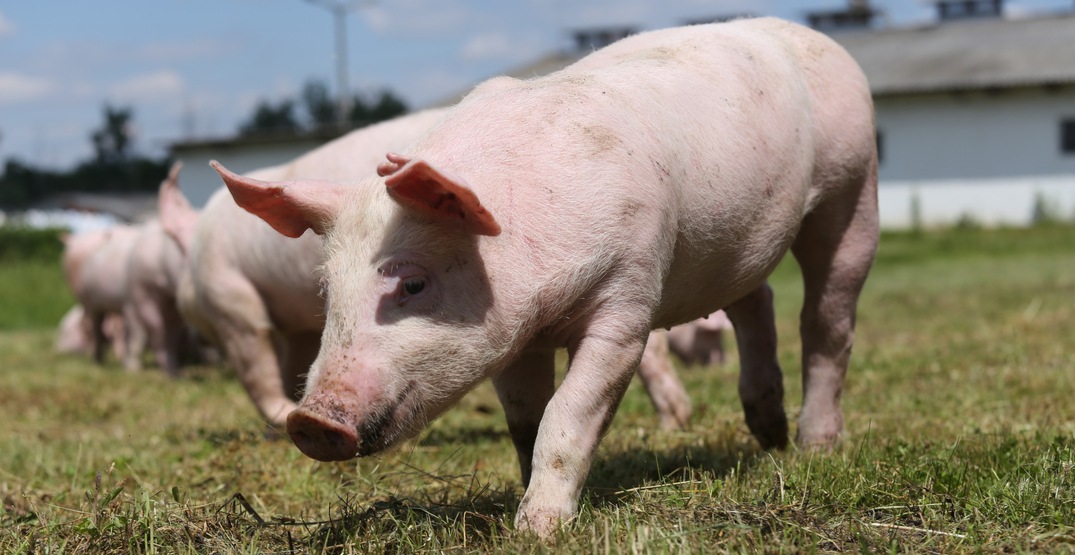 Recently, in front of a cheering crowd, a 165-pound pig was dropped from a 223-ft tower in a bungee jump act. The reason for this cruelty? To mark the opening of a new bungee jump attraction at a theme park in China.

According to some reports, it was also a symbolic way to mark the end of the Year of the Pig in the Chinese calendar and the celebration of the Lunar New Year.

However, this horrific incident drew local and international outrage, resulting in petitions to have the theme park shut down and pushing the theme park to apologize. More questions are now being raised about the lack of animal welfare laws in China.

And while what happened to that innocent pig was heartbreaking, pigs and other farm animals face suffering and abuse daily worldwide, including here in Canada.

With the Year of the Pig ending, this is an opportunity to shine more light on the welfare issues endured by these social, sentient creatures.

Pigs possess intelligence similar to that of a three-year-old child, and newborn piglets learn to run to their mothers’ voices and can recognize their own names by the time they are just a couple of weeks old. Pigs have also been adored in films like Babe and in the classic children’s book Charlotte’s Web. And then there’s the more recent social media sensation of Esther the Wonder Pig.

Still, many see these unique creatures only as a food source.

On factory farms, including some in Canada, female breeding pigs are confined to cages (sow stalls) no bigger than an average household fridge. The animals are so cramped they are unable to even turn around. Piglets are also mutilated: their tails are cut, their teeth are ground or clipped, their ears are notched, and most male piglets are castrated. Overcrowding and unsanitary conditions are also common.

In Canada, there are codes of practice that provide requirements for the treatment of animals on farms, but they are not mandatory, and many codes still permit practices that compromise animal welfare.

That being said, Canada is making some steps towards better welfare for pigs. For example, by 2024, the industry aims for barns to have group housing for pregnant pigs. And since 2016, castration and tail cutting is required to be carried out with pain relief in Canada.

More recently, companies in China and Brazil have announced a commitment to phase out cages for female pigs, and in Brazil, they will also end castration, ear-notching and teeth clipping. These are all promising steps signalling that progress is possible.

Perhaps the biggest impact, though, will come from consumers who have a strong influence on the industry and can be a voice for all animals.

As people become more aware of the lack of animal welfare on many farms and the outright abuse animals can face, they are changing their eating habits, and many are giving the vegan diet a try.

Industrial farming is also a major source of global greenhouse gas emissions. Over 80% of farmland is used for livestock. Reducing meat and dairy would free up land to be returned to natural forest, and scientists say the agriculture industry needs to have a time frame for the peak production of animals raised for food.

It’s important to note, though, that there are farmers who raise their animals in higher welfare conditions, such as not putting pigs in cages and giving animals access to the outdoors. Consumers who eat meat should consider buying higher welfare products, as at least the animals were raised in better conditions.

Now is the perfect time to make better food choices. It will make a difference for humans, animals, and the planet.