Ever wanted to know how the most powerful people in hockey communicate with each other?

You probably didn’t, but thanks to the NHL’s unsealed emails released Monday, the public is getting that glimpse.

With players filing a class-action lawsuit against the league for the long-term damage of concussions, the emails between top NHL executives were released to the public.

The Globe and Mail provided a searchable cache of all 297 documents, and some – most involving Colin Campbell, the NHL’s Director of Hockey Operations – are both embarrassing and revealing.

Here is a selection of a few that might raise your eyebrows.

Note: All spelling and punctuation is maintained from the original emails. Don’t blame our editors for this!

In March 2007, Colin Campbell and Brian Burke had a back and forth. Reading it, you get the feeling Campbell’s concern over fighting and the lasting effects was only to cover himself and the league, rather than genuine concern for the players’ health.

But judge for yourself. Here’s their exchange in chronological order.

Before you call me a “Greenpeace Puke” I only asked the question before the greenpeace pukes accused us of ignoring the question.

Subject: RE: The Question

I never did-said you were in a position of authority and entitled to your opinion. Pointed out neither “stretcher case” was seriously injured-Fridge just fought the wrong guy.

Hate to disagree with you publicly-but we have made this too public a part of our approach. So I have to, reluctantly.

Burkie…I love a good fight. Who had Probie and Joey in their first years? Roger and I had a book made by Sandy Vigilante (the fight tape king) in return for us giving him tapes where he didn’t have the fights. We used the book for our pre-game scouts on tough guys styles. If anything this debate “cleanses” our game and provides us with the defense that we did “ask the question”. Let the players defend it. They won’t take a stand otherwise. We need their support here. Say what you have to have no problem with that. You always will say these things respectfully. Just tell Thornton and Parros not to come and burn my farm down in the summer.

“Colin, Can you give me an idea what you are thinking on the Letang hit? Thx, Ray,” he wrote in the email.

Campbell’s response (that was obviously never meant to be made public):

We are going to get rid of hitting AND lay down every time you are hit. Keep
your freaking head up. Shoulder to shoulder! Those are my thoughts! Not to be repeated!!!

3. Campbell calls a player a “woos” and soft

After Tom Kostopoulos hit Mike Van Ryn from behind in 2008, leaving him injured on the ice, Campbell wrote an email to Gary Bettman calling Van Ryn a couple of names, and saying he should be suspended.

Bettman’s email: “I have to give a speech tomorrow in toronto. Did you tell me that we had 35 concussions last year from hits to the head? How are you feeling?”

Yes…those were the numbers Kinger used. I am confirming those right now with Kris. We had a hit from behind last on Toronto (Kotsoplous on Van Ryn). Kotsopoulous received a 5 min penalty and kicked out of game.. Toronto scored. Van Ryan is a woos and soft but he ended up with a broken nose and broken hand. He should be penalized and suspended for putting himself in a bad position. We are having a hearing tomorrow for Kotspoulos.

This one doesn’t involve Campbell, but it shows Bettman’s (sometimes aggravating) ability to deflect questions like only he can.

TSN’s Darren Dreger posed the following question to the commissioner in January 2008: “Hypothetically, if a senior member of the Flyers management team said publicly (on-camera) that Jason Blake “had it coming” in reference to the sucker-punch thrown by Downie, would that cause you distress?”

between us and as a matter of theory, don’t we want intensity and rivalry? would need to see context/who etc, – perhaps; perhaps not. a big help. huh?

This exchange between Campbell and an NBC producer might provide insight into how he and Bettman must have reacted every time Ron MacLean said something disparaging about the league on Hockey Night in Canada.

After Brett Hull said Campbell and Bettman are trying to remove fighting from the NHL, Campbell emailed Sam Flood, the producer, and he wasn’t complimentary to Hull.

How does the NHL react when a broadcaster says something they disagree with?

At least, at least have him talk to me before he says I and Gary want to get rid of fighting. Not the case at all. He can’t assume. I like the fact he has the balls (or is nuts) to say what he feels but UNLIKE Charles Barkley, he does not do his homework or is just plain dumb.

The call will be made from now will insist.

So much for the media being kept at an arm’s length.

Here, Campbell mocks the email he’s “responding to” from Darren Dreger, forwarding it to his co-workers. 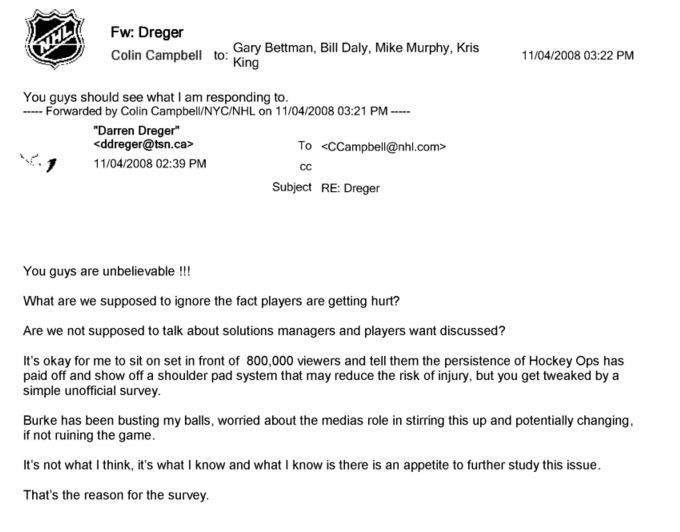 This email chain between Campbell, Bettman, and Brendan Shanahan clearly shows who was pushing for change and who wanted it slowed down. 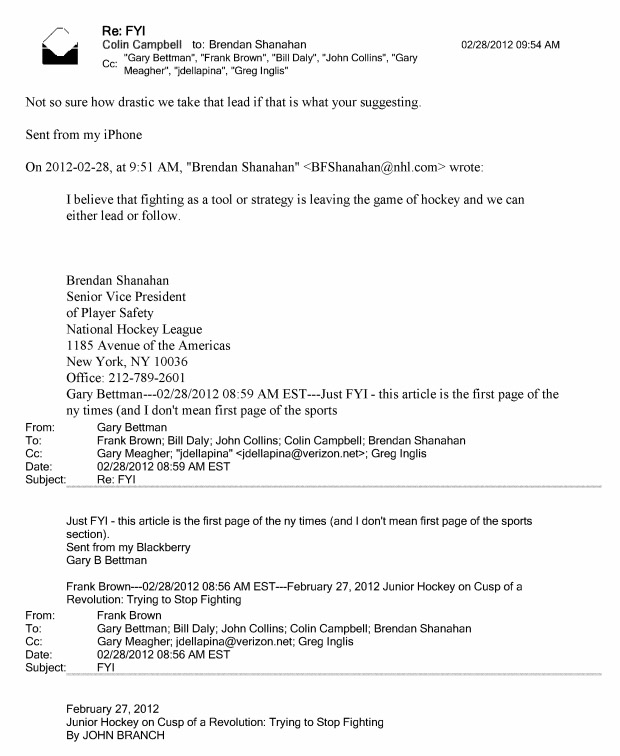 Not sure what this email chain shows, other than the fact Campbell’s thought process is disjointed.

Here, he inexplicably brings “cage fighting” into the discussion. I’m still not sure why. 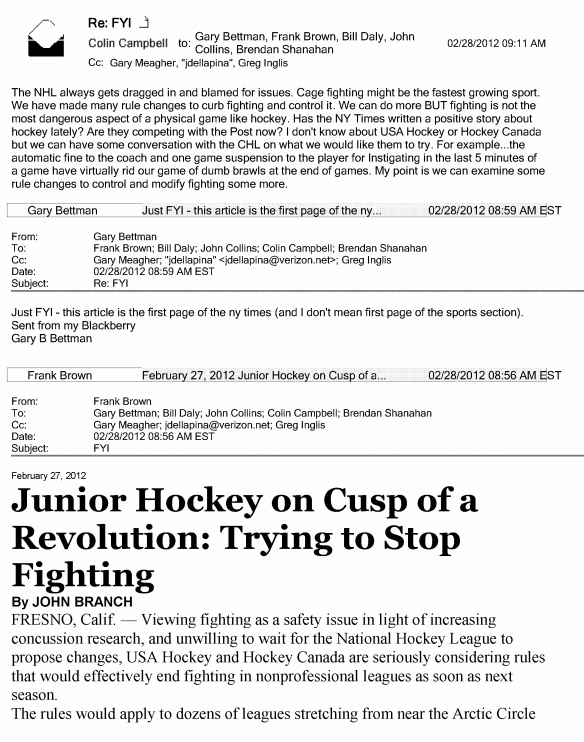 If you’re wondering how Campbell still has a job with the NHL after all these years, you’re not alone.

Worse, the league went through something similar in 2010 when Tyler Dellow exposed emails where Campbell referred to Marc Savard as a “little fake artist.”