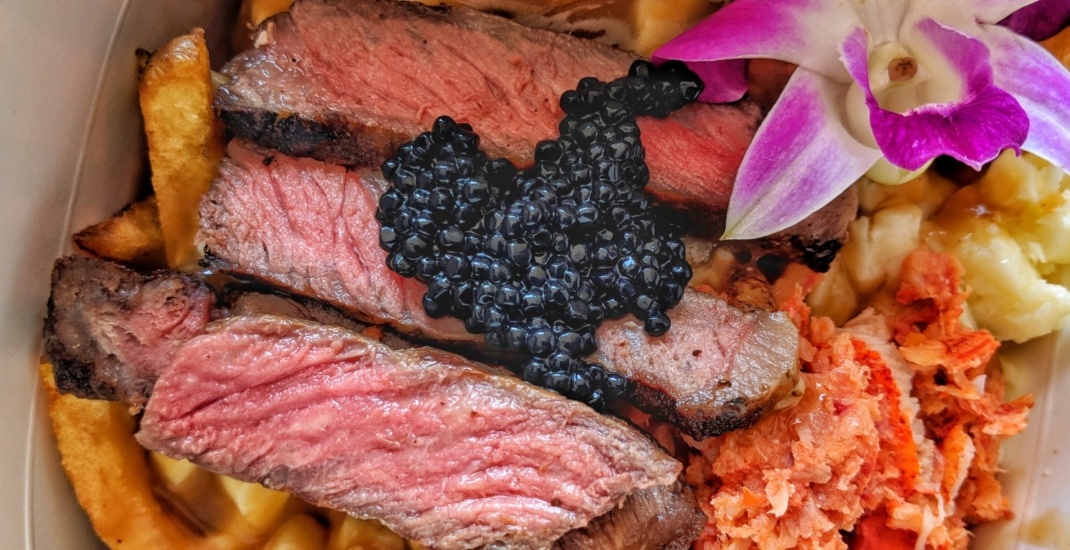 Canada’s most prolific chain of poutineries just created the world’s most lavish pile of fries, curds, and gravy.

The epic poutine, worth nearly $450(!!!), was created at a location of Smoke’s Poutinerie in Toronto last night at an event attended by stars of Crazy Rich Asians in advance of the film’s release.

Ken Jeong, Awkwafina, and Nico Santos lent a hand in the creation of this crazy rich poutine that piled loads of luxe ingredients on top of the iconic Quebecois dish.

The final surf and turf creation (total value of $448.17) was comprised of a whole lobster, wagyu steak, truffle oil, caviar, shiitake and chanterelle mushrooms, kimchi, edible orchids and $100 worth of gold flakes.

“You’ve seen Surf & Turf Poutine before, but we just took it to an INSANE, never-seen-before level with our CrazyRichPoutine,” said Ryan Smolkin, Founder and CEO of Smoke’s Poutinerie. “This was truly a wicked opportunity to team up with the cast of Crazy Rich Asians and entertain our Plaid Nation Fans with the World’s Richest Poutine!”

In good news for your wallet, the deluxe poutine is not launching soon on the menu at a Smoke’s Poutinerie near you. Only those in attendance at the event had the opportunity to sample the elaborate dish.