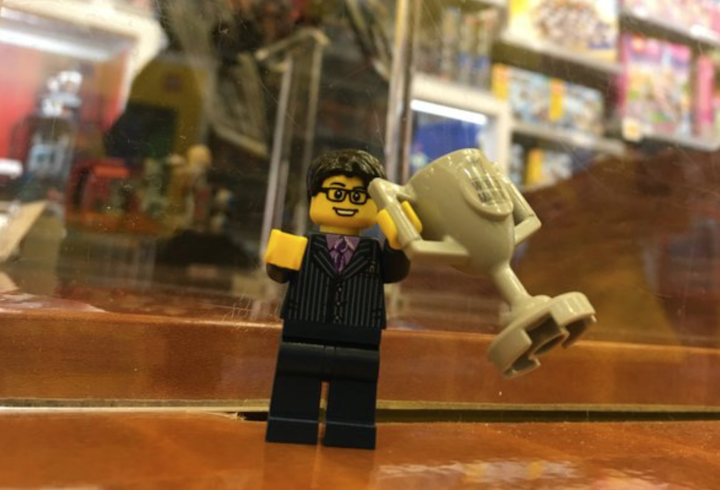 Not satisfied with only the mayor, Lego Nenshi also comes with accessories. It’s not exactly clear what those are (the box says it contains six pieces), but at least one of them is the enormous “#1 WORLD MAYOR” cup that’s almost as tall as the man himself. Assuming Nenshi is 5’10 or so, the cup looks to be about 5’6, or 2’7 taller than the Stanley Cup. Unwieldy? Yes. Insanely proportioned? Yes. Necessary? Absolutely.

Only 100 custom-designed Lego Nenshis are available, and they’re going for $100 each. With the purchase you’ll also get a set of four gorgeous bookmarks designed by Calgary graphic designer Matt Leadbeater — the same guy who designed Lego Nenshi — and an $85 tax receipt.

Unfortunately, if you’re hoping to find Nenshi in your next Star Wars Lego adventure set, you’re probably out of luck. The site is very clear that Lego Nenshi is not an official product — Lego has no affiliation with the product or Leadbeater. Their loss.

It’s Lego @nenshi in a purple chair with his purple shirt at the new Central Library pic.twitter.com/ews6H70mbV