Matt Damon wants you to drink more beer. And when Jason Bourne tells you to do something, you better do it!

Damon is the co-founder of Water.org, an organization working to end the global water crisis through the development of financially-sustainable solutions. They’ve helped over 10 million people around the world to date, by improving communities’ access to safe water and sanitation.

Over the years, Water.org has been raising awareness with humourous stunts, including the 2013 “toilet strike” protest Damon held in solidarity with those who don’t have access to sanitation systems.

In 2015, the organization partnered with Stella Artois to spark action from consumers. Together, they set a goal to provide long-term, sustainable access to clean water for 3.5 million people by 2020 – and by the end of this year, they’ll be 50% of the way there.

“It’s hard for us to truly imagine what it would be like to not have access to water. But for 663 million people in the developing world, reality is different. Millions of people spend up to six hours every single day just to collect water. Can you imagine what that would be like?” Damon asks in ‘The Wait for Water’ video, challenging people to imagine their lives without clean water.

How can you get involved today and help?

It’s really that simple. Each year, Stella Artois releases Limited-Edition Chalices, which represent the countries supported by Water.org. From now until April 15, buy a 12-pack and you’ll provide one person in need with water for six months.

“I know Canadians drink beer, by the way,” Damon said. “So if you’re going to drink beer, there’s no reason you shouldn’t be drinking Stella. It’s delicious, and it’s doing good in the world.”

Note: The recent voluntary recall of bottled Stella Artois does not apply to the brand’s beer cans 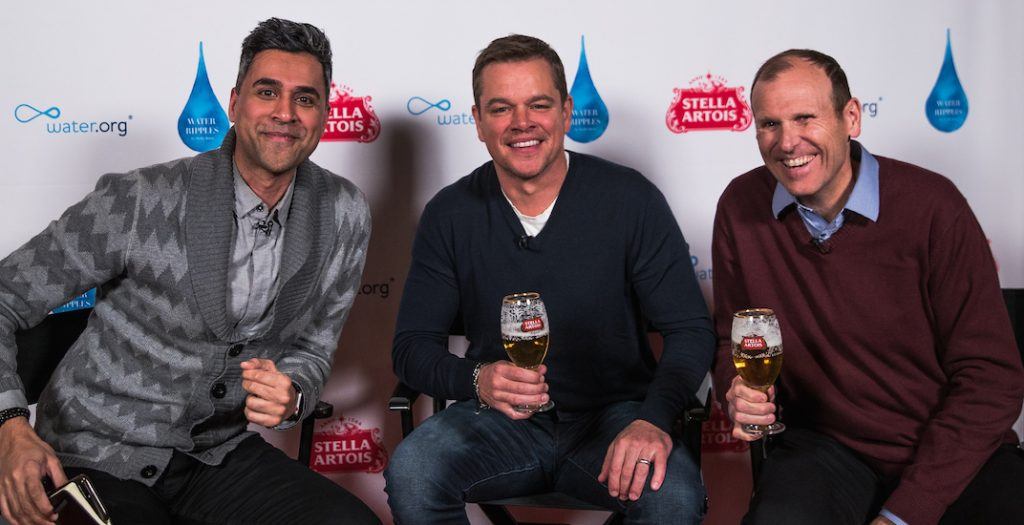 Daily Hive got to sit down with Damon and Water.org co-founder and CEO, Gary White, in New York to discuss the importance of using your platform to mobilize your audience, inclusion riders in Hollywood, and the power of collaboration.