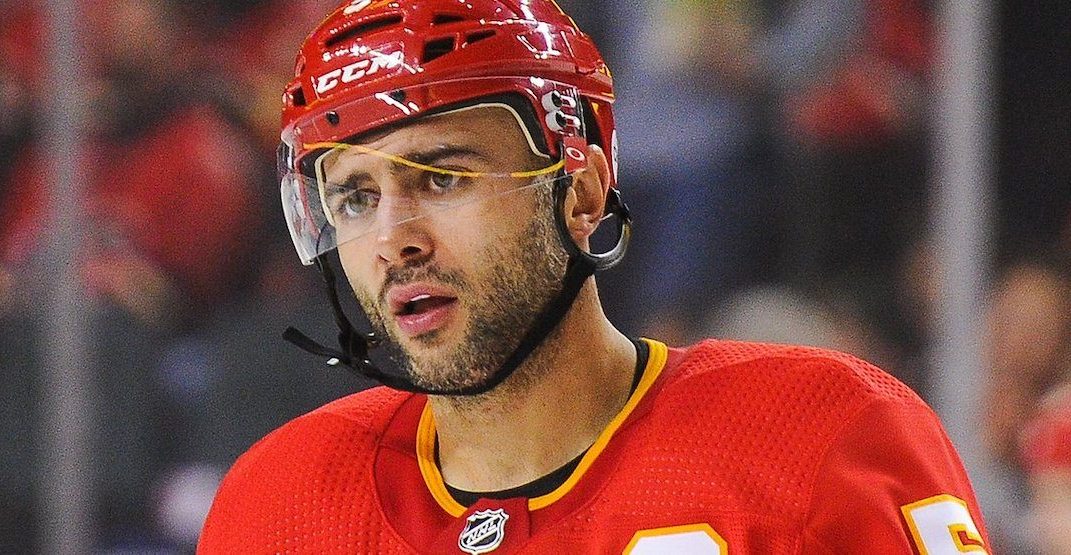 That’s continued into his 11th season of wearing the red and black of the Calgary Flames, getting off to the best offensive start of his winding career at 35 years of age.

Through the first third of the 2018-19 campaign, Giordano has torched his competition for 32 points in 30 games and has been a major cog in Calgary’s success to begin the year.

That start has put the Toronto native right in the thick of the early season Norris Trophy conversation as the Flames have rocketed up the standings to sit in first place in the Pacific Division.

Recently speaking to reporters in Calgary, Giordano has been more consistent this season in getting breakouts from the defensive zone and creating offence off the rush.

“I’ve had some tough nights, but I think most nights I feel like I’m trying to be consistent and play well against other teams’ top lines,” said Giordano. “All that other stuff is going to come, numbers and points and all that, when you’re put in a good position to succeed.”

It’s a remarkable stat line that Giordano has to open the year, as he leads all NHL defencemen with 28 assists, sits second in points per game (1.07), and trails only Toronto’s Morgan Rielly and Ottawa’s Thomas Chabot in scoring.

If the NHL season ended today, who should win the Norris Trophy? @DailyHiveYYC

That’s made more amazing as Giordano has missed action already in late 2018, coming off a two-game suspension for a kneeing infraction on Minnesota Wild captain Mikko Koivu.

Elias Lindholm, who has also broken out offensively for Calgary this year, said the team noticed a big difference over that stretch.

“[Giordano is] probably our best player this season, he’s one of the best defencemen in the league,” said Lindholm. “So, when you get one of those guys back it’s going to help the team. He’s a great leader on and off the ice as well, so he’s been huge for us this year.”

Giordano has also worked his way into Norris consideration with a ripping hot start to December recording nine points in his last three games, including a goal and two assists on Wednesday night against the Philadelphia Flyers.

He’s also put himself in some pretty historic company in posting the fifth-best offensive start to a season for a Flames defenceman through his first 30 games.

Only Al MacInnis (three times) and Gary Suter have netted more points by a Flames defenceman than Giordano through 30 games, a stat made even more impressive that he’s performing the way he is in what should be the twilight of his career.

After seeing his defence partner in Dougie Hamilton shipped off to Carolina, Giordano has also been able to find chemistry with T.J. Brodie again since the pairing was split up three years ago.

“I think this season he’s getting the notoriety that he deserves, but I think it’s been a long time coming in that sense.”

It’s a sentiment that appears to be picking up steam around the hockey universe, with even Ryan Whitney of the Spittin’ Chiclets podcast making the case for Giordano this week.

A true late-blooming blueliner, Giordano didn’t receive his first vote for the Norris Trophy until 2014 at the age of 30 and has never been in the top five in voting.

It’s safe to say a regression in Giordano’s hot start is likely, as his advanced stats like Corsi (58.4 percent) and PDO (103.5) are much higher than league average and will likely drop as the calendar flips into 2019.

However, the underlying numbers for the Flames show they are one of the top possession teams in the NHL and the numbers seem to be trending upward approaching the midway point of the season.

If Giordano can keep up his pace and win big at the NHL Awards in Las Vegas, he would become the first Flames defenceman in franchise history to win the Norris Trophy.

He would also be one of the oldest Norris winners in NHL history, with only Nicklas Lidstrom, Doug Harvey, and MacInnis winning the prestigious award after the age of 34.

Though he’s the senior on the Flames blueline by seven years, Giordano is producing above and beyond his peers who are entering the so-called prime of their careers.

And that fire coming to the Scotiabank Saddledome hasn’t dwindled in the 35-year-old.

“Playing around a lot of young guys, especially now being one of the older guys, you get that energy coming to the rink around them,” he said. “I enjoy it, I love skating, I love being on the ice.

“So, I’m going to play as long as I can for sure, and force them to kick me out.”