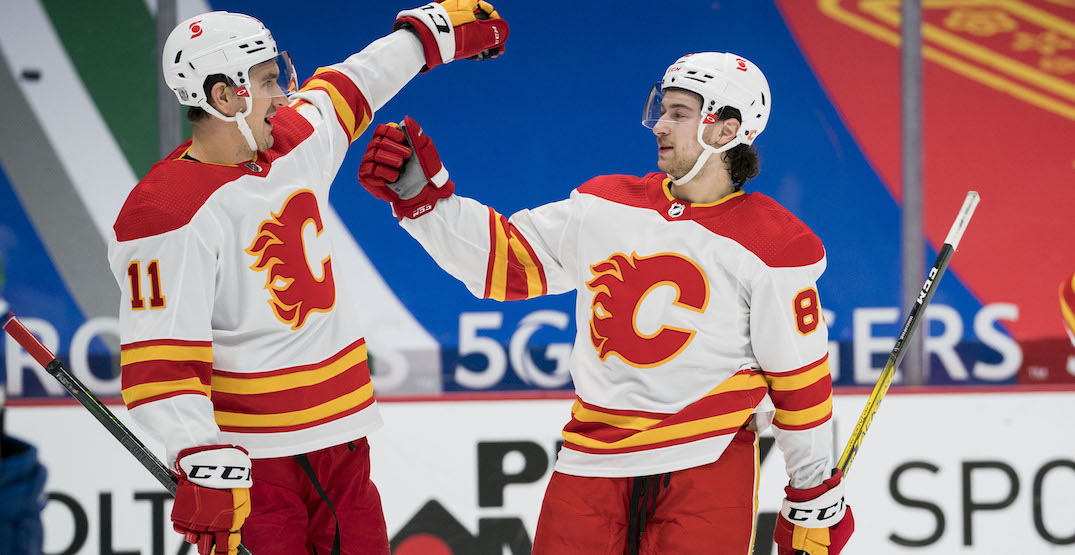 The secret is finally out, Andrew Mangiapane is really good at hockey.

Fresh off his first appearance wearing the Canadian maple leaf, the Calgary Flames’ skilled winger is returning home with a gold medal around his neck and a IIHF World Men’s Hockey Championships MVP trophy in his suitcase.

At every stage of his hockey career, Mangiapane has been overlooked and disregarded for bigger, stronger and more skilled players.

His rise through junior hockey, the American Hockey League and the National Hockey League has been slow and steady, jumping over gradually larger hurdles at each step.

Now, he’s coming off an impressive season on an otherwise disappointing Flames team and is making a strong case for a permanent spot in Calgary’s top-six forward group.

And depending on potential moves the Flames may or may not make this off-season, the 25-year-old could serve a much larger role in the team’s lineup.

While he didn’t factor into Sunday’s gold medal winning goal in overtime against Finland, make no mistake Canada likely wouldn’t have tasted glory without Mangiapane’s contributions.

If there was any doubt Andrew Mangiapane was the MVP of this tournament, he put that to bed today. Two goals, one on effort the other on pure skill. Canada won five of six since he cleared quarantine after late arrival. He has seven goals and 11 points in six games.

When Mangiapane became the last player to complete his quarantine in Latvia, the Canadian contingent was basically in shambles.

Three straight losses to open the tournament including two to middle of the pack countries like Germany and the host Latvians had Canada off to its worst start in an international tournament in years.

It’s not the introduction to Team Canada that Mangiapane had necessarily envisioned, previously passed over for Canada’s U18 and World Junior rosters.

In fact, that was more par for the course for the Toronto product over his career.

Undrafted in the Ontario Hockey League, Mangiapane exploded for 43 goals and 104 points in his second season with the Barrie Colts right before the 2015 NHL Draft.

But as happens so often in the NHL, his sub-six-foot frame was picked apart and the winger fell into the sixth round where he was nabbed at 166th overall by the Flames.

Only three players drafted after Mangiapane have become NHL regulars (Winnipeg’s Mason Appleton, Columbus’ Markus Nutivaara and Los Angeles’ Matt Roy) and his climb to the NHL was slow.

It was a line that immediately began to generate chemistry, with Mangiapane netting the eventual game-winning goal in Canada’s first win of the tournament over Norway.

That kicked off a scoring barrage for the Flames forward, tying for the tournament lead with seven goals in just seven games of action.

If his exploits in Latvia weren’t enough, Mangipane is also coming off the most productive season of his NHL career.

While most of his teammates struggled to generate offence on a Flames team that came up short in their chase for the Stanley Cup Playoffs, the same can’t be said for the diminutive dynamo.

For the second year in a row, he ended his season with 32 points with a one goal improvement on the 17 tallies he registered in 2019-20.

Not bad numbers, but made even more impressive when you consider that was done in 12 fewer games.

If stretched out to a full 82-game season, Mangiapane’s production over his 56 games this year would put him at a 26 goal and 47 point pace which would all be career highs.

His 0.87 goals expected per 60 also ranked third best on the Flames this season and had a full 4.4 goals above expected, highlighting the fact that expectations on the winger are likely to rise.

With Johnny Gaudreau’s future in Calgary uncertain to say the least, there is a chance Mangiapane could be elevated to top-line minutes if the Flames choose to deal their star this off-season.

Even if that doesn’t happen, you can bet Mangiapane will be more of a force on Calgary’s power play next season.

Just two of his 18 goals this year came on the man advantage, and his performance in Latvia has proven that he can provide timely goals in key situations.

Whatever the case, you can put money on the fact that Mangiapane will be one of the forwards that the Flames will protect from Seattle’s grasp in this summer’s expansion draft.

It’s time for Calgary to strike while the iron is hot with their hidden gem, playing the best hockey of his life and is seemingly ready for more responsibilities with an ever-evolving Flames team.