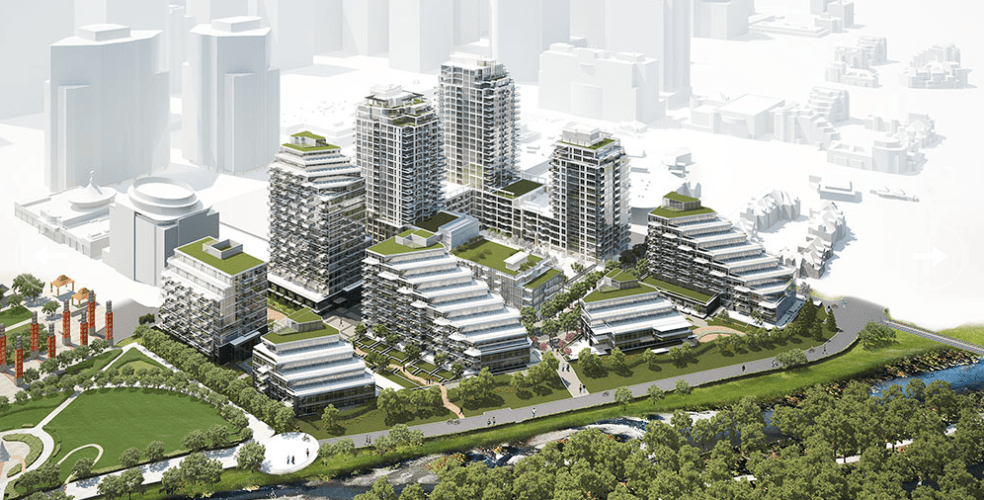 Calgary is a constantly evolving city, one that’s bustling with new people and fresh ideas. Alongside its people Calgary itself is also changing thanks to new development projects that will transform the city’s skyline.

To give you a glimpse into what Calgary will look like in the coming years, here’s a rundown of some of the major residential projects that will transform the city skyline:

A permit application has been handed in by Norr Architect to build Eau Claire West, according to the City of Calgary. Eau Claire West is proposed to be made up of seven mixed-use towers ranging between 66 to 109 metres tall and consisting of hotel, restaurant, retail space and residential units. The project is priced at around $713.2 million and if the application is approved the first structure to be built will be the W4, the tallest building of the group.

Norr Architects recently submitted an application for a building permit for the West Village Towers, according to the City of Calgary. The three tower condo building will be located on 850 11 Street SW on the West End of downtown. Construction costs of the building are estimated to be around $118.7 million and the project size is estimated at 800,000 square-feet. The buildings will offer an unobstructed view of the Bow River and the Rocky mountains.

Offering residents easy access to the city, the project will feature 440 rental residential suites in the two towers, that are projected to be 17 and 34 storeys tall. The ground and second floor of the space will be for commercial use. The building is expected to be completed in the Summer of 2016 and its size is estimated to be roughly 435,000 square-feet.

Construction for these two 31-story buildings will be commencing soon. The Orchard plans to plant over 60 apple trees in the one acre of land between the buildings. Two species of apple trees will be planted and together they’re estimated to bring 100,000 apples each year.

The Concord contains two towers with a high focus on quality, in total there will be over 200 suits. It also is a host to many different features like extra care in flood protection, a water feature that can act as a pond in the summer and a skating rink in the winter, fitness area and more. This project is estimated to cost around $75 million.

The City received an application for building the remaining two Waterfront 10-storey buildings on site which will have 78 units. Construction costs of these two buildings are projected to be $32 million. Once the the project is completed there will be a total of six buildings and 381 units.

A building permit application has been submitted by GEC Architecture for the N3 Condos. Sitting at 114,054 square-feet with 167 residential units with retail as well, The N3 Condo towers in East Village is estimated to be around $24.3 million, according to the City of Calgary.

Located in East Village, The Hat, is projected to stand 28-storeys tall and is intended to be a mixed-use condo building with 221 units. The cost for the building is more than $60.8 million and the project is a part of the East Village Area Redevelopment Plan (ARP), according to the City of Calgary.

TELUS Sky is fashioned to be a combination of office space, over 320 luxury residential units, and retail stores. At 761,235 square-feet this project is set to be big and will be located at the corner of the 100 block of 7 Avenue SW. TELUS Sky is said to be the first building in Clagary to meet LEED Platinum standards.

If you think we missed a major residential project let us know in the comment box below.