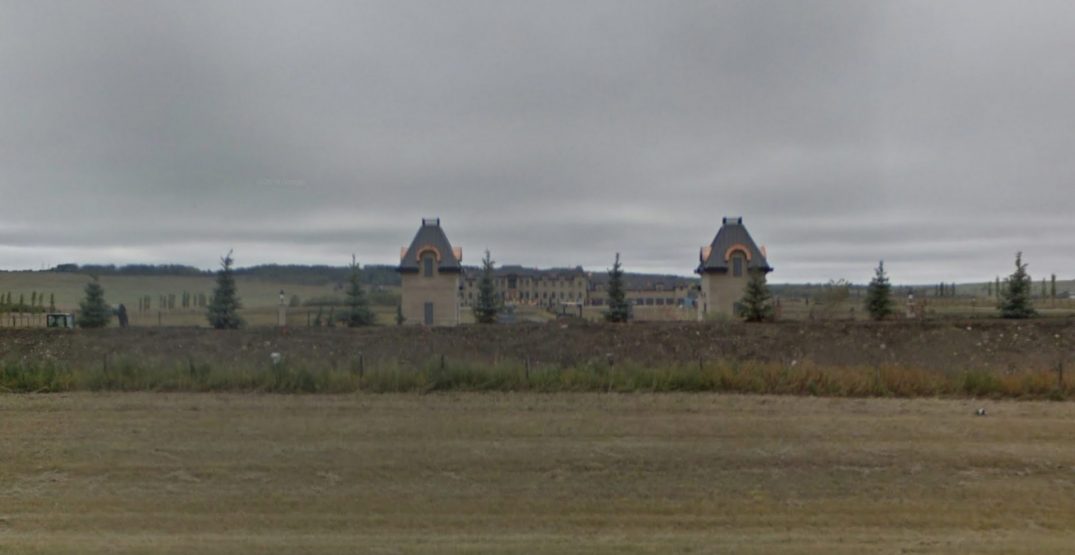 An opulent and not entirely attractive mega mansion located west of Calgary on Highway 22 has been something of a mystery to Albertans since construction began in 2014.

A recent article by Jen Gerson of Maclean’s magazine takes a closer look at the McMansion, and aims to address some of the questions we all have about the property.

The French château-style building may look like a poorly placed hotel, but’s actually an 11,000 square foot private residence. The 242131 Range Road 42 property is located on 80 acres of land, with views of the Rocky Mountains… And the highway.

Gerson notes that the main problem with the home is not its size, nor that it’s uniquely ugly, but how exposed it is. This area is known for large homes; however, most are tucked away or hidden by impressive landscaping, while this one is highly visible from the busy highway.

A line of trees “[doesn’t] do much to shield the home from the prying eyes of your intrepid Maclean’s journalist, who shamelessly pulled onto the highway shoulder to sneak a peek through a pair of binoculars,” reads the article.

According to the Gerson, the front door of the impressive residence is protected by statues of life-sized golden horses, led by a golden chariot driven by a giant winged man, who is also (you guessed it) gold.

The land houses a nine car garage and two guardhouses as well.

“It’s been called an ‘eyesore,’ ‘hedonistic’ and, most harshly, a ‘grotesque and narcissistic tribute to the owner’s ego,’ reads the article.

The owner remains a partial mystery, but the name on the land title is Ernest Hon. According to a profile in Alberta Venture, the Hon family immigrated to Canada in 1988, shortly after Ernest was born, after investing heavily in Hong Kong real estate.

The Hons are now well-known Calgary developers, most noted for the Guardian, a 44-storey building in Victoria Park that is currently the city’s tallest condo tower.

The Alberta Venture identified Ernest Hon as the lead spokesperson for major residential projects in downtown Calgary, and he frequently offers analysis on real estate.

“I see the future of cities as being very urban,” Hon told Alberta Venture just prior to construction of the prairie mansion. “People are more interested in downtown living. Calgary’s late to this, but you’re seeing that revival of downtown after the 1960s, ’70s and ’80s—30 years of neglect.”

Makes you wonder why he built a home 35 minutes from Calgary’s downtown core.