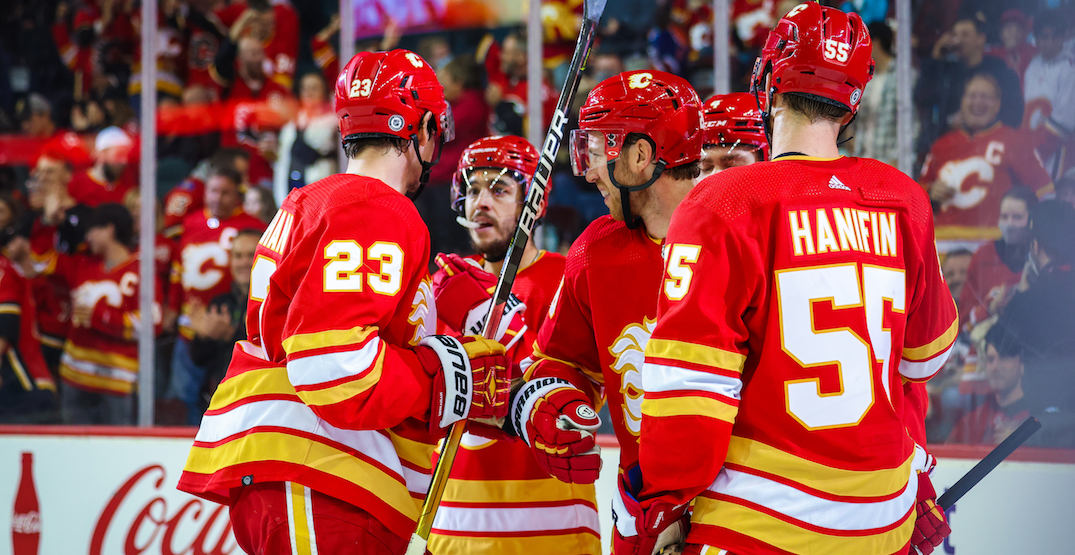 After a 2020-21 season that concluded without an appearance in the Stanley Cup playoffs, the Calgary Flames made some changes over the off-season. The club added four experienced forwards in the form of Blake Coleman, Tyler Pitlick, Brad Richardson, and Trevor Lewis, a quartet with five Stanley Cup rings on their combined resumes.

While Coleman, due to suspension, and Richardson, due to injury, won’t be available for opening night, these new additions will give the Flames some different looks on their forward lines. Many of these combinations are variations on what head coach Darryl Sutter used last season.

Using recent line rushes in practices as our guide, the Flames will likely deploy four lines with distinct roles. Here is Calgary’s projected lineup for Saturday’s season-opening game in Edmonton, which will of course include Jacob Markstrom in net, backed up by Daniel Vladar.

The club’s top offensive line from 2020-21, this line features the speedy and creative Johnny Gaudreau, the club’s top centre in Elias Lindholm, and the bruising and tenacious Matthew Tkachuk. When Coleman is back from suspension, it’s anticipated that Tkachuk will move to his natural left side after playing on his off-wing for much of the past two seasons.

In the interim, this top trio provides several complimentary attributes and the club’s two top offensive weapons in Gaudreau and Tkachuk. They’ll be given tough match-ups and challenged by the coaching staff to out-gun the other club’s top players.

The Flames need a bounce-back season from Sean Monahan to have one as a team, and after off-season surgery the centre is back to full health. He’s joined by a pair of up-and-comers to begin the season in Dillon Dube and Andrew Mangiapane. Mangiapane has been the Flames’ most consistent even strength player in recent years and an excellent forechecker, and pairing him and Monahan with Dube provides the line with a second forechecker who can aid in puck retrieval and hopefully keep Monahan from having to take too many hits along the boards.

Rather than going head-to-head with top lines, the aim is likely to match them against second and third lines while Lindholm and Mikael Backlund’s lines face the other team’s top stars.

A former Selke Trophy contender, Mikael Backlund has developed a reputation as a superb shutdown forward for the Flames and whatever line he’s on tends to become a “tough minutes” trio, facing the other team’s best players and starting most shifts in the defensive end of the ice in order to chase those match-ups.

To start this season Backlund looks to be joined by a pair of veteran checkers in Milan Lucic and Trevor Lewis. While both of Backlund’s wingers will probably end up on the fourth line when the team’s back at full strength, they’re both savvy two-way players that bring a mixture of tactical awareness and physical play to the shutdown line.

To start the season, the fourth line will feature a unique trio. Glenn Gawdin made the team out of camp after a superb exhibition performance that followed a great run in the AHL as a two-way centre. Brett Ritchie is a utility body for the Flames who plays with energy and physicality, but won’t move the needle offensively. As of this writing Tyler Pitlick has yet to skate with the main practice group since suffering an injury in late September, but he seems likely to slot in here in an effort to ease him into the lineup (rather than starting in a more prominent role). This line will be given a simple task: start a lot of shifts in the defensive zone against the opposition’s lesser lights and try to move the puck up the ice effectively.

On the blue line, the Flames begin the season with eight defencemen in three fairly distinct groupings.

Noah Hanifin spent the bulk of 2020-21 joined at the hip with veteran Chris Tanev, and what resulted was Hanifin’s best season as a Flame. He was spun off onto a pairing with Rasmus Andersson near the end of the season, primarily because Sutter felt he was good enough to carry his own pairing. Andersson had a shaky season alongside Mark Giordano and settled down tremendously when paired with Hanifin.

The hope is Hanifin and Andersson can be relied upon to generate offense while playing against the other team’s second and third lines.

Tanev was superb for the Flames last season and the hope is his game will hold up as he’s asked to do some heavy lifting for the Flames. Nikita Zadorov joined the Flames via an off-season trade, and he’s a capable defensive blueliner with little offensive upside. Tanev may be a good enough all-around defender that this duo can generate some offence, but primarily they’ll likely be leaned on as a shutdown pairing against first and second line opposition.

For the time-being, the Flames are carrying four third pairing bodies and will probably make an effort to rotate them in. The likely duo for opening night looks to be Juuso Valimaki, an up-tempo puck-mover, and Erik Gudbranson, a bruising stay-at-home type. The available substitutes are Oliver Kylington, another puck-mover, and Michael Stone, another stay-at-home type.

The likely thought process is that these player types will compliment one another. The third pair will primarily be used against the opposition’s depth forwards.