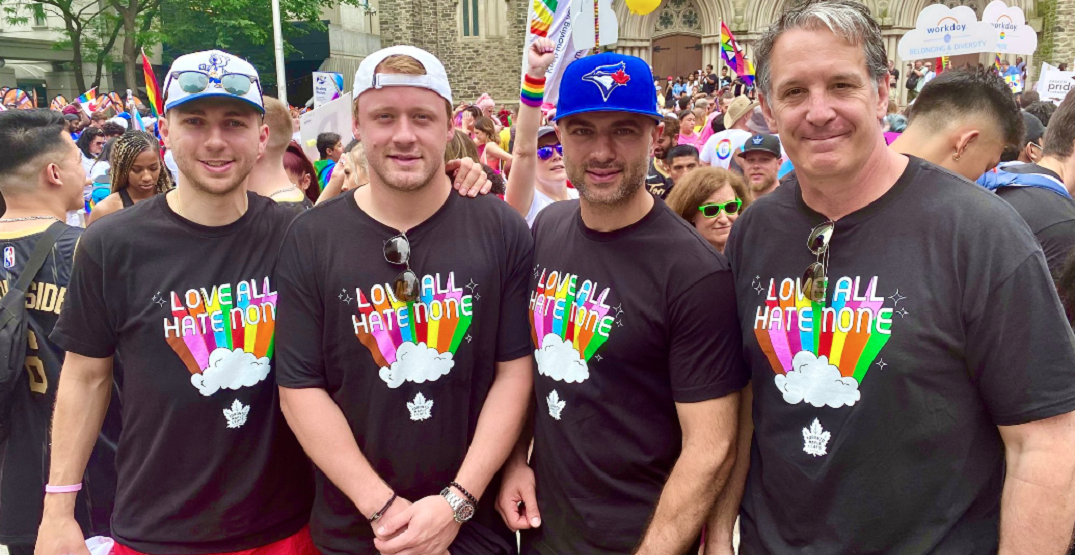 The Toronto Maple Leafs made their presence known at this year’s Pride parade taking place in Toronto.

Forward Michael Bunting, defencemen Mark Giordano and Morgan Rielly, and Leafs president Brendan Shanahan were all in attendance at the parade.

The group was pictured wearing “Love All, Hate None” shirts, and posed for photos and handed out Leafs- and other MLSE team-themed Pride flags to the attendees.

Love all
Hate none pic.twitter.com/u6Y4Sy3EnA

Rielly might not have even been the most famous athlete in his household marching on the day, though. His partner Tessa Virtue, the three-time Olympic medal-winning figure skater, was also marching alongside the adidas contingent.

this weekend is for pride only, not my words, tessa’s 🤩🤩 I LOVE HER pic.twitter.com/kteHO4OZ8K

Happy Pride from Toronto with a few of my favorite fellow allies. pic.twitter.com/BbUydJaqZ0

“Happy Pride from Toronto with a few of my favorite fellow allies,” Burke wrote in a tweet.
Burke has been a longtime supporter of the You Can Play movement, a anti-homophobia campaign that started in the wake of his late son Brendan’s death, who was killed in 2010 in a car crash.
Brendan, an equipment manager for the Miami University men’s hockey team, had publicly spoken about his own experience coming out, and was widely credited with sparking conversations about homophobia and 2SLGTBQIA+ issues within sports.