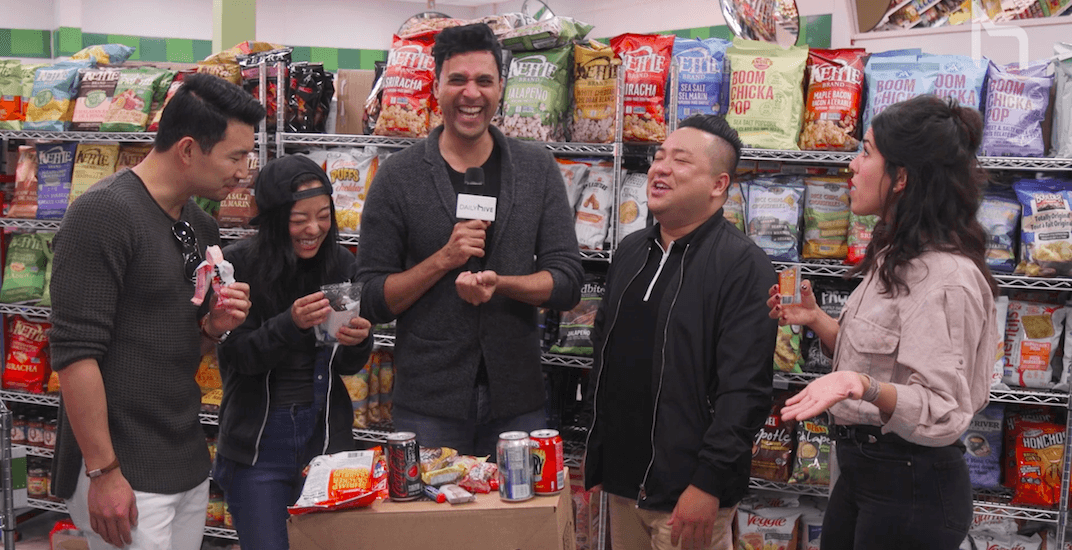 The cast of CBC’s Kim’s Convenience is in the middle of a cross-Canada press tour, promoting the hit comedy’s second season.

During their stop in Vancouver, we invited the kids (er, younger cast members) of Kim’s to sneak away and check out one of our local convenience stores: Snack Land on Main Street and East 14th.

Everyone got $10 and one mission: find the craziest snacks in the store.

Some were really into the challenge…

…while others got a bit distracted.

But in the end, we wound up with a pile of extreme snacks. Here’s what we tried:

The name says it all – it’s spicy, ginger-y, and for those with adventurous taste buds. This British import may seem mild at first, but you won’t want to chug this bad boy. Trust us.

Not as spicy as the label made us believe, but not for those who are heat-averse.

A new twist on a classic cookie – golden Oreos with apple pie-flavoured cream filling. These were released as a limited-edition treat for fall, so snatch them up when you find them!

The gang had mixed reactions.

Tastes like apple pie, but not enough to swap out your Thanksgiving dessert.

These kettle chips are not for the faint of heart. The taste of BBQ will lure you into a false sense of security – and then the habanero flavour kicks in. You’ll want a glass of milk nearby for this one.

Too hot to handle – seriously.