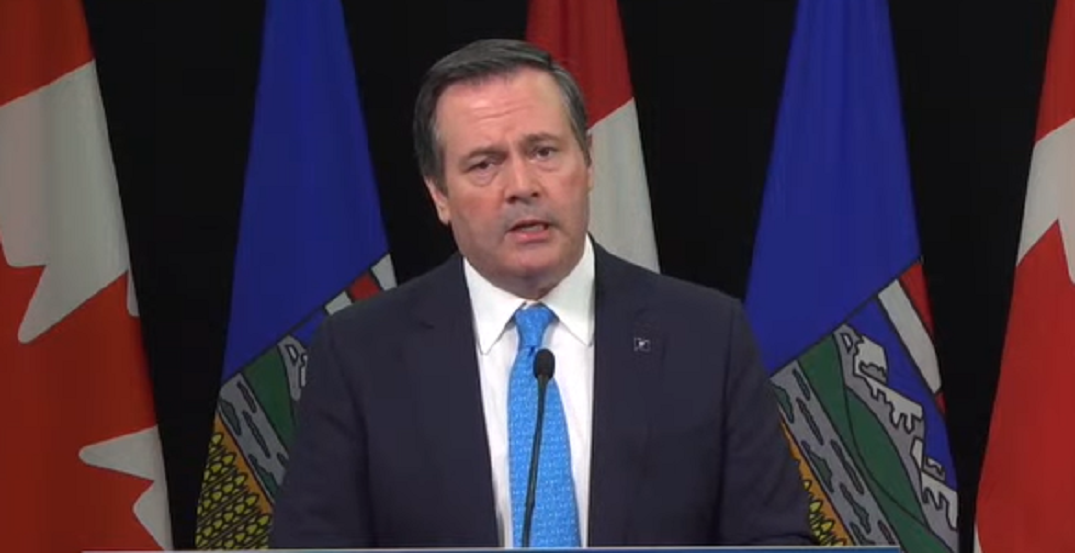 Alberta Premier Jason Kenney had some stern words for the leaders of a few federal parties.

Kenney was speaking at the daily COVID-19 update when he answered a question regarding Green Party leader Elizabeth May and Bloc Québécois leader Yves-François Blanchet’s recent comments on the Canadian oil industry.

The comments had been made during a press conference on Wednesday, with May stating that the country should look towards renewable energy in the aftermath of the COVID-19 pandemic given that “oil is dead.”

May had cited a recently published Oxford University report that spoke to financial experts around the world about what a post-coronavirus recovery would look like for global and national economies.

“The advice is that if we want to get out of this pandemic with a healthy global economy, don’t put money in fossil fuels at all to try to bail them out, it won’t work,” she said of the report.

“Put money into renewables and energy efficiency and a low carbon economy, because that’s the only money that’s going to actually be able to create a lot of jobs quickly and get the economy going again.”

Blanchet had a similar message, stating that any investment in the tar sands would be a bad call on the part of the federal government.

“I think the tar sands are condemned, and putting any more money in that business is a very bad idea,” he said during the press conference on Wednesday.

He also brought up the possibility of directing the $10 billion Trans Mountain pipeline investment towards renewable energies.

“If the $10 billion that the federal government is [going] to invest in Trans Mountain project was to be instead invested in new energy,” he said, “I would understand that most of this money should be spent in Alberta in order for Alberta’s economy to make the necessary transition toward new forms of energy, new industry, and new markets; because tar sands won’t be back.”

Kenney responded to these comments on Thursday, calling them attacks on the Albertan oil industry, and stating that the energy industry “has done more than any [other industry] in modern Canadian history to create jobs and prosperity, to fund social programs and government services, and to unite Canadians with our equalization payments and transfers across the country.”

Kenney also noted that the alternative to Canadian energy would be “dictator oil,” which he stated was responsible for the severe drop in global gas prices.

“I would say to Mr. Blanchet and Madame May: Please stop kicking us while were down,” Kenney said.

“We Albertans have been generous, and we will continue to be generous, but these attacks on our natural resource industries are unwarranted, they are divisive, they’re, I believe, in a way, unCanadian in a time like this. It’s like blaming the victim.”

Kenney also stated that Alberta has also been generous to Quebec through shipments of PPE equipment and ventilators to aid in the fight against coronavirus.

He then stated the message in French for francophone publications.