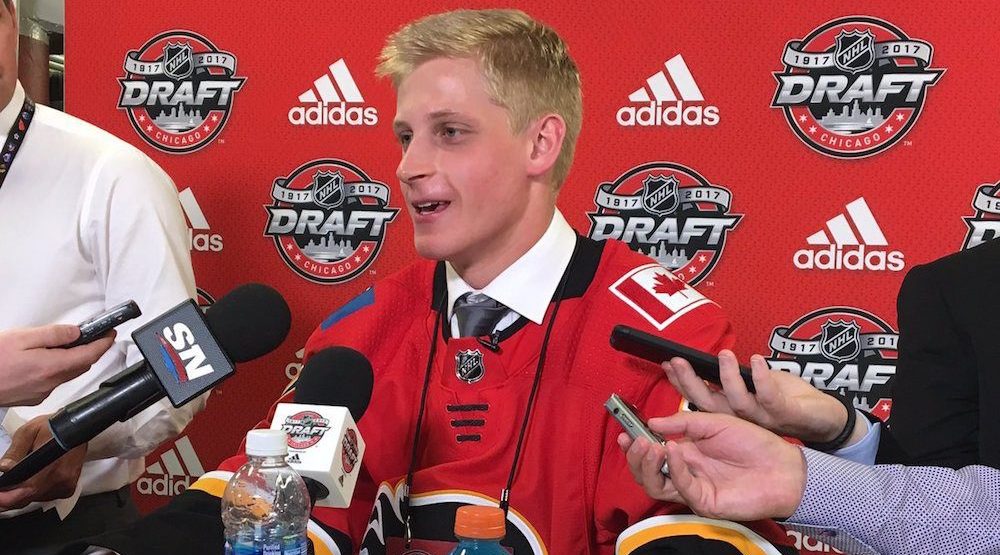 For the first time in eight years, the Calgary Flames have gone with a defenceman with a first round pick.

Tri-City Americans defender Juuso Valimaki was selected by the Flames 16th overall on Friday, becoming the first blue liner picked by Calgary in the opening round since Tim Erixon in 2009.

It was a safe bet that the Flames would be looking at a young defensive prospect in this year’s draft, but a number of names were available.

Timothy Liljegren, Henri Jokiharju, Connor Timmins and more were still on the board, but the Flames elected to go with the 6’2” defensive prospect out of Finland.

Growing up in Nokia, Finland, Valimaki’s early hockey career came with playing through the Ilves Junior C and Junior B systems in Tampere.

Consistency was a big part of the smooth-skating Valimaki’s game from a young age, putting up points from the blue line in all levels before reaching Ilves’ U20 team in 2014-15.

That year he put up 20 points in 44 games, and also played internationally for Finland’s U17 and U18 squads in a number of tournaments.

Generating buzz across the pond, Tri-City took a risk and drafted Valimaki with the 14th overall selection in the 2015 CHL Import Draft.

Knowing that he had a chance to play in the WHL, Valimaki had a tough decision between staying in the Ilves system in Finland or moving to a new continent at the age of 17.

“My goal was to play in the NHL, and I thought the best way for me to get there is to play in the WHL,” said Valimaki. “The games and the ice time and all of that stuff was a big thing there, and I haven’t regretted one second since I left.”

Once moving to the United States, Valimaki’s family followed with teammate Michael Rasmussen moving in, who formed a special friendship with the Finn over their two years together in Kennewick, Washington.

Less than an hour earlier, Rasmussen was drafted ninth overall by the Detroit Red Wings.

Most European players need time to adjust to the North American style of hockey after moving, but not Valimaki.

In his rookie season with the Americans, Valimaki scored seven goals and 32 points in 56 games and finished second in points by a defenceman.

That spring, Valimaki’s leadership was rewarded with not only a spot on Finland’s U18 team, but the captaincy as well.

Leading the charge from the back end with a pair of assists over six games, Valimaki ended the tournament by lifting the World U18 championship trophy over his head in Grand Forks, North Dakota.

With his growth accelerating, but things were expected for Valimaki in his draft eligible season in Tri-City.

He did not disappoint, as he posted over a point per game for the Americans, ranking fourth in WHL goals by a defenceman (19) and seventh in points (61).

Extremely happy and honoured to be a part of nhlflames organization! #dreamcometrue https://t.co/A9Y7ORFynP

Future Considerations had this to say about the 200-foot defenceman in their draft preview:

“A strong, minute-munching, two-way, dependable blueliner…not a lot of high-end offensive flash or dash to his game, but just makes the right play consistently…good vision and puck moving ability, has no panic to his game and waits for his options…can sling the puck around with strong accurate passes…his hockey sense allows him to read and react to the play well in advance…very committed to blocking shots…big, rangy and covers a lot of ice, but his pivots and transitions are a little bit choppy…solid lateral mobility, especially carrying the puck and keeping it out of range of the opposition…plays with a good mix of aggression and poise, stepping into lanes to take the puck away from the opposition…just a good, poised, smart player who is not flashy, but consistently makes the right play and helps his team win games.”

One area Valimaki said he wanted to improve upon was his skating ability and that translating over to his defensive footwork.

That’s something that Flames GM Brad Treliving was impressed with, citing that Valimaki’s skating currently is a strength, but is glad to see an 18-year-old wanting to keep improving.

Treliving added that just scanning Valimaki’s stat sheet doesn’t tell the whole story about his abilities at both ends of the rink.

“For one of these guys who’s as productive as he is, there’s not a lot of holes in his game defensively,” said Treliving. “He’s versatile, but we really like the intelligence, we like the offensive ability and the mobility. So, we’re excited about the pick.”

Sights and sounds from Chicago as we follow around Juuso Valimaki on his big night pic.twitter.com/i10s4y3eFq

The road to the NHL won’t be an easy one for Valimaki, as he has to contend with an already strong Flames defensive prospect system that includes Rasmus Andersson, Oliver Kylington, Brett Kulak, and Adam Fox.

Despite the long road ahead Valimaki said he’s confident about his timeline for making the jump to the NHL.

“I’m doing everything I can right now to make the team right away,” he said. “But, I think I can play there in two years for sure.”

Set to return to Tri-City for his third year in major junior, Valimaki will likely be one of the top rated defencemen in the WHL and could get a starring role with Finland at the 2018 World Juniors in the winter.

Unlike Sean Monahan, Sam Bennett and Matthew Tkachuk who made the jump directly from the CHL to the NHL, Valimaki will need more time and seasoning to perfect his craft.

But once he reaches the big leagues, there’s a good chance the Flames will have found another defensive cornerstone to add to their blue line.