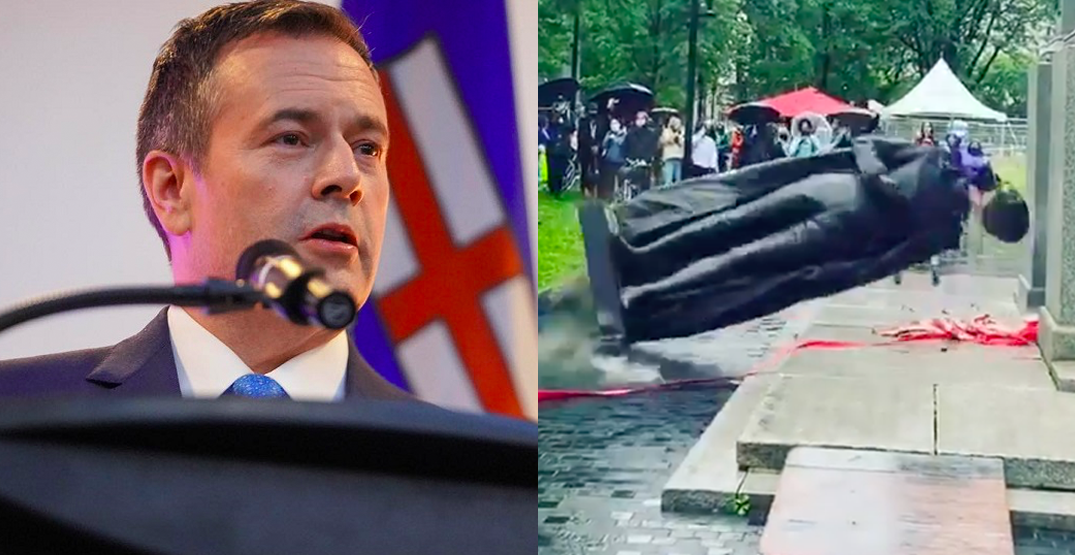 Alberta Premier Jason Kenney said he’d be happy to take a Montreal statue of John A Macdonald that was toppled in the city’s downtown on Saturday.

Video of the event shows the monument, surrounded by banners, being forced off its perch, as protesters pull on a long pink line tied around the statue.

Cheers erupt as it bounced off the ground, sending Macdonald’s head flying.

The indecent drew ire from Montreal’s mayor, Quebec’s premier and more, as they condemned the action, Kenney included.

“A mob has torn down and defaced the statue of Sir John A Macdonald in Montreal,” he wrote on Twitter. “This vandalism of our history and heroes must stop.”

Quoting from a biography of the first prime minister, the premier adds that despite flaws in both, the man and the country are “still great.”

He blames the violence on the “extreme left,” and adds it’s right to debate the man’s legacy, but that “roving bands of thugs” shouldn’t be allowed to commit vandalism with “impunity.”

Among the condemnation, he also offered to bring the statue to his home province.

“If the City of Montreal decides not to restore Wade’s statue of Macdonald to where it has stood for 125 years,” he said on social media, “we would be happy to receive it for installation on the grounds of Alberta’s Legislature.”

2/ Many of those on the extreme left responsible for this kind of violence claim that Canada is an illegitimate state, all the while enjoying Canada’s rights, freedoms, privileges & prosperity. None of those things were created by accident. They come from the vision & sacrifice