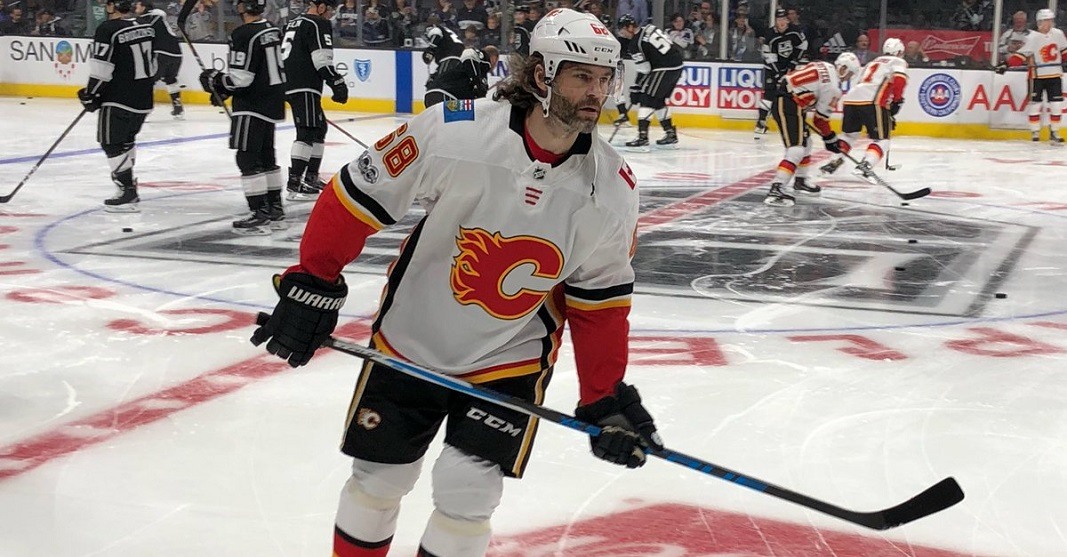 The legend of Jaromir Jagr continues.

Matthew Tkachuk and Sean Monahan may have been the heroes for the Calgary Flames during their 3-2 OT win over the LA Kings on Wednesday night, but most of the talk was around the 45-year-old playing his first game with the Flames.

Can you really blame anyone?

Second to only Wayne Gretzky as the NHL’s all-time leader in points, Jagr was perilously close to not signing a contract at all for this season.

He eventually settled on a one-year, $1 million deal with the Flames.

After taking the time to travel to Calgary and get his conditioning up a bit, he made his season debut in Los Angeles, much to the joy of Flames fans and players.

The Man The Mullet The Legend!
Welcome back Jags!

Jaromir Jagr playing for the Flames still blows my mind.

Jagr is fitting in nicely with the Flames pic.twitter.com/cqsZZvvAHv

The Flames are undefeated in the Jaromir Jagr Era

Of course, another season of Jagr means countless more jokes about how old he is…

Matthew Tkachuk just scored a goal on his mother's bday. Family celebrating both. She too, is younger than Jagr.

Has someone started the Jagr is so old drinking game yet? We will hear it all season. #Flames

Jagr played on the third line with Sam Bennett and Kris Versteeg, who were certainly excited for the opportunity to play with the living legend.

"It's going to bring a boost to us." – Kris Versteeg on Jaromir Jagr making his #Flames debut pic.twitter.com/gjBwI9VOSh

The only person that seemed unhappy with Jagr, was Jagr himself.

He played 13:38 in his first game with the Flames, which included some power play time, but finished with a -1 rating and didn’t register a shot.

He seemed rather disappointed with his performance after the game, but when you’re 45 years old and haven’t played a game in six months, there’s sure to be some growing pains.

Jags’ take on his first game as a Flame! pic.twitter.com/CyDbEHTigS

Jagr may not have been happy, but the fans certainly were.

Just imagine the hype when he scores his first goal.