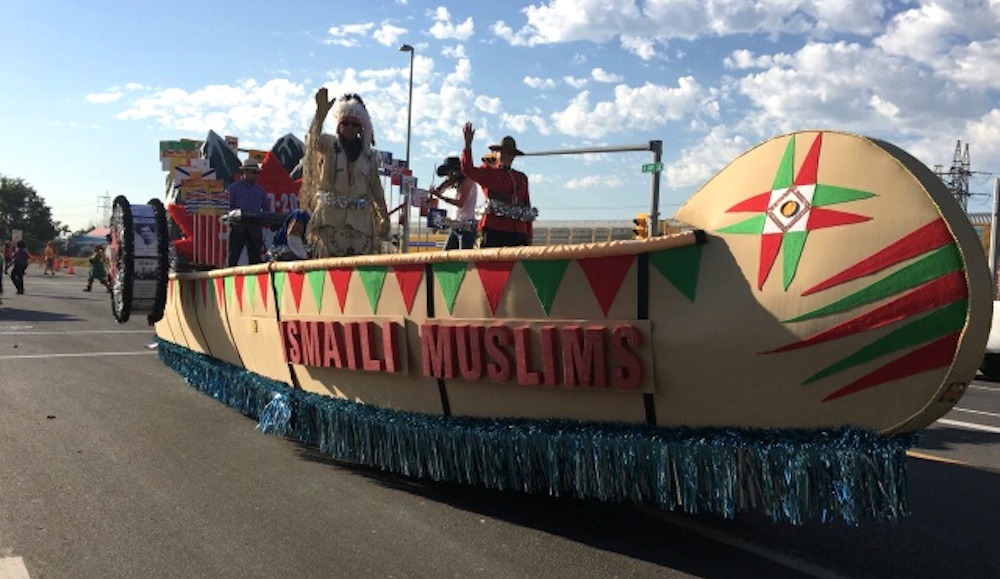 The Ismaili Muslim Community in Calgary have become quite the experts in building floats for the Calgary Stampede Parade.

A history going back almost 30 years, the Ismailis have won several parade awards including, Best Overall Parade Entry in 2007, Best Cultural Entry in 2011, and Best Overall in 2012 to name a few.

This year’s float titled, “Our Canada: Land of Opportunity,” was comprised of iconic Canadian symbols such as the Maple Leaf and was made from a reconstructed canoe.

“This float is a tribute to Canada and our Western Canadian values,” said Ismaili Community Volunteer, Tasneem Rahim in an interview with The Calgary Stampede. “It is reconstructed canoe which really plays tribute to our First Nations. The canoe was a moment of livelihood for them.”

Other central themes seen in this years float are pluralism (when small groups within a larger society maintain their unique cultural identities), giving back to the community, and compassion for the less fortunate.

Children from the Ismaili Muslim Community were invited to make ceramic tiles depicting their visions of Canada which were added to the float.

On the float were members from the Ismaili Muslim Community along with honoured guests including Retired RCMP Sergeant Betty Glassman and an Elder from the First Nations Community.

For entries in the Parade, it takes hundreds of volunteer hours to get everything ready for the route. When we went behind-the-scenes with The Ismaili Muslim group, we found out some volunteers have been putting in 90 hour weeks! Now that’s dedication to getting the show on the road. #yyc #volunteers #itsastampedething #calgarystampede #stampedeparade #float #canada150

“Because we’re celebrating 150 years of Canada, we wanted to celebrate by displaying what Canada is all about,” said Velji. “Sergeant Betty Glassman is one of the five females who graduated in 1976 and was one of the first female RCMP officers in Canada. The four maple leafs on the float shows Canada serving four corners of the world.”

This year’s float also showcased a special tribute to His Highness the Aga Khan, spiritual leader of Shia Ismaili Muslims around the world, with the placement of two diamond frames.

“It’s a very exciting year for our community in Canada as we commemorate His Highness the Aga Khan’s Diamond Jubilee,” said Rahim. “It’s really a tribute to his incredible leadership to humanity but also to bettering the lives and the quality of life for those in need.”

If you missed seeing the float in the parade, you can check it out at the 21st Annual Ismaili Muslim Stampede Breakfast which will be held on Saturday, July 8 starting at 7:30am at the The Ismaili Muslim Jamatkhana and Centre, located at 1128 45th Avenue NE.

Here’s a a few sights and sounds of the float from parade day.

The Ismaili Muslim Community float in this year’s Stampede Parade. A tribute for #Canada150. Beautiful.❤️@nenshi#ProudToBeACanadianIsmaili pic.twitter.com/2kKcUBEwHR