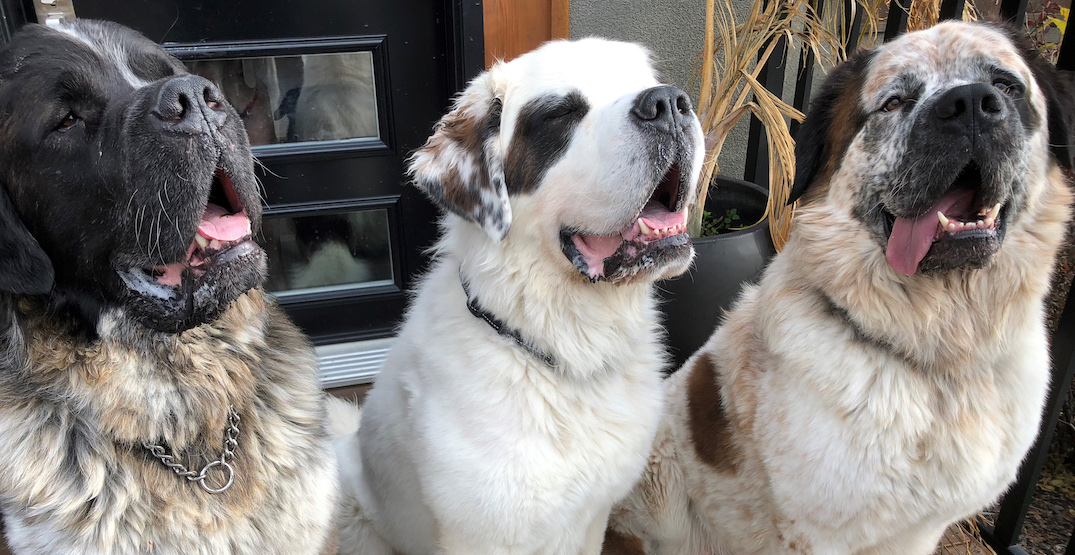 Three Saint Bernard dogs were looking for a home earlier this month, though there was a slight catch for would-be adopters — the dogs had been best buddies since birth and were therefore “bonded,” meaning that if you wanted one, you had to take all three.

The collective 350 pounds of warmth, fur, and friendship didn’t have to wait long before adoption applications came flooding in, as the Edmonton Humane Society’s (EHS) call on October 9 explaining their unusual predicament had gone viral on social media.

According to an October 18 release from EHS, hundreds of inquiries were received in the time since that call was put out, and the society had gone through a week-long process of interviewing and reviewing potential adopters before ultimately landing on their chosen family.

The family, who would like to remain anonymous while the dogs get used to their new digs, own a one-acre fenced yard for Gasket, Gunther, and Goliath to enjoy while getting to know their adoptive dog sibling and the family’s two children.

“We are beyond excited to be giving these three dogs their forever home,” the family said in the EHS release.

“When we found out that we were getting the opportunity to meet them, we cried tears of joy. Pets add so much to the family, and we’re so happy we can give back to them by providing a loving home for the rest of their lives.”

The dogs’ new home is in Calgary, where there are bylaws surrounding responsible pet ownership. Though there is no limit on the number of dogs that can be owned. EHS also stated that keeping the animals within Alberta was in the trio’s best interest, as it would minimize the additional stress of a big move.

“The response to the story of these gentle giants, from the thousands who helped share our call for help to those who offered their homes to these dogs, was truly astounding,” said Jamey Blair, Manager of Animal Health & Protection, in the release.

“At the end of the day we could only choose one family for them, but there are thousands of other homeless pets who are all as deserving of a forever home. We hope this story inspires people to adopt from their local shelters and rescues.”

EHS is currently hosting an adoption event in the hopes of finding homes for over 250 other animals that are in their care, and potential pet owners will have until Sunday, October 21 to find a new best friend while adoption fees are reduced.

Donations are also being accepted that will help support animals like Gasket, Gunther, and Goliath, the release states, and those donations can be made at EHS’s website.