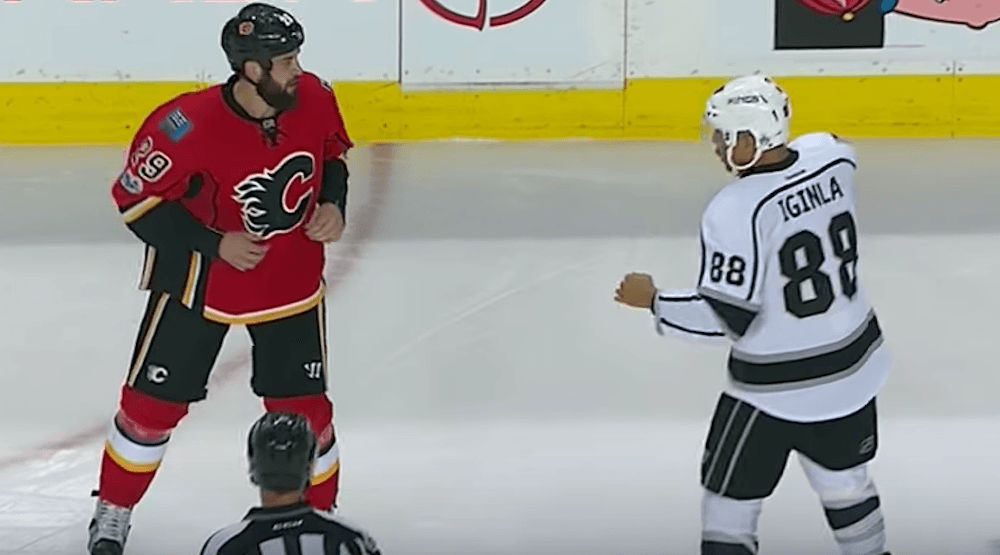 If that was Jarome Iginla’s last game in Calgary, he certainly went out in style.

The 39-year-old future Hall of Famer doesn’t have a contract for next season and his future could be up in the air. But after putting up disappointing numbers with the worst team in the league this season (18 points in 61 games with the Avalanche), he’s showing that there’s still gas left in the tank with his new team in Los Angeles.

Iginla has seven points, including five goals, in 13 games with the Kings. And on Wednesday, in what could be his last game at the Saddledome, the Flames’ all-time leading scorer helped power LA to a 4-1 win in a massively important game against his old team.

“Who knows how many more I have, but it’s one that I’ll remember for sure and it’s special,” Iginla told Sportsnet after the game.

Iginla certainly had a night to remember, picking up a Gordie Howe Hat Trick.

Iginla can still fight (that's all Engelland's blood on his jersey) pic.twitter.com/i8lxgql3l6

He fought the bigger/younger Deryk Engelland in what was a spirited first period. Iginla had to clean up his jersey because it had Engelland’s blood all over it.

Late in the second period, Iginla picked up what proved to be the winning goal (thanks to Mark Giordano for putting it in his own net).

Iggy picked up an assist on the fourth Kings goal in the third period too, sending a beautiful pass to Jeff Carter for a tap in.

He ended the night +3 and was named the game’s first star.

For LA, it was a huge win to keep their playoff hopes alive. It was a big game for the Flames too, as they would have punched their ticket to the postseason with a win.

So while a win was what Flames fans wanted, getting to see some vintage Iggy for perhaps the last time wasn’t a bad consolation prize.