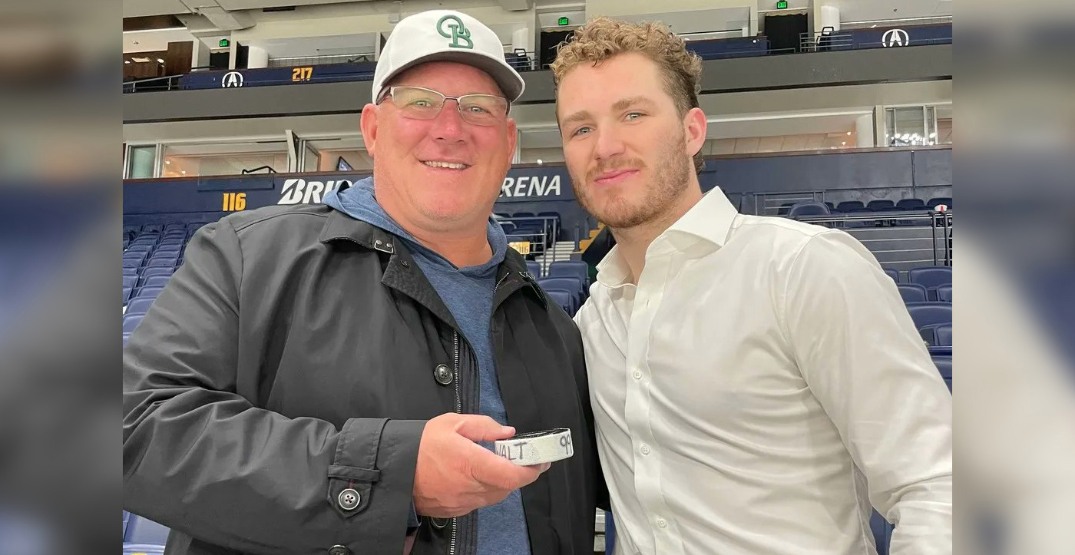 Matthew Tkachuk officially has bragging rights when it comes to the most productive NHL season in his family’s history.

After earning a helper on Andrew Mangiapane’s second-period goal, Matthew officially moved ahead of father Keith Tkachuk into sole possession of the single-season family scoring lead at 99 points.

And to celebrate — and maybe rub a little salt in the wound — Keith was presented with the puck used to set the new family staple.

We had a little surprise for Big Walt after Chucky picked up his 99th point in Nashville, surpassing his dad's best of 98 🔥 pic.twitter.com/hqUaN2axxR

“I saw the video there,” Matthew said Thursday. “They were great enough to go surprise him during the game. There was no audio, so maybe there were some f-bombs thrown…no, he was really excited after the game. I got the chance to see him.

“Obviously would’ve liked to see us win, but you couldn’t get the smile off his face if you tried. He’s our, my brother’s biggest fan along with my mom…probably my mom, but he’s right there with her. He was very excited. He definitely doesn’t want me to stop at that.”

One more, and Matthew will be the first member of the family to crack 100.

The father, who spent parts of 18 seasons in the NHL with the Winnipeg Jets, Arizona Coyotes, Atlanta Thrashers, and St. Louis Blues, can still lay claim to the family’s goal-scoring record, though. His single-season personal best is 52, set in 1996-97.

"Having home ice is huge. Just playing well going into playoffs is the most important thing as well."

Matthew Tkachuk on the opportunity to clinch the division title tonight against the Stars. pic.twitter.com/oXfQWRMUKa

There’s a loftier goal that’ll go a lot further in the boasting department.

Hardware heavier than a puck.

“If he says something, maybe I’ll throw it back at him,” Matthew said. “It’s a regular-season thing. The ultimate goal is the Stanley Cup. He wants that for both me and my brother, and we want that as well. That’s all our family cares about right now. My dad was even saying that a few weeks ago.

“We all know what the ultimate goal is.