We are one week into the NHL playoffs and we’re chalk full of controversies in the NHL. With all the offside reviews, logo gate, bracelet gate, empty seats, and Andrew Shaw, we’re right on schedule.

Does anyone in Florida care about the Florida Panthers?

I mean, I know we say this about a lot of markets in the sunbelt, but this feels different. It’s one thing to get poor crowds when your team is terrible and it’s a Tuesday night with the Blue Jackets in town. It’s quite another when you’ve got a young, exciting team with a couple of marquee veterans like Jaromir Jagr and Roberto Luongo.

After three exciting games, has south Florida caught playoff fever? Judging by the amount of seats available for Friday’s pivotal Game 5 matchup, the answer is no. 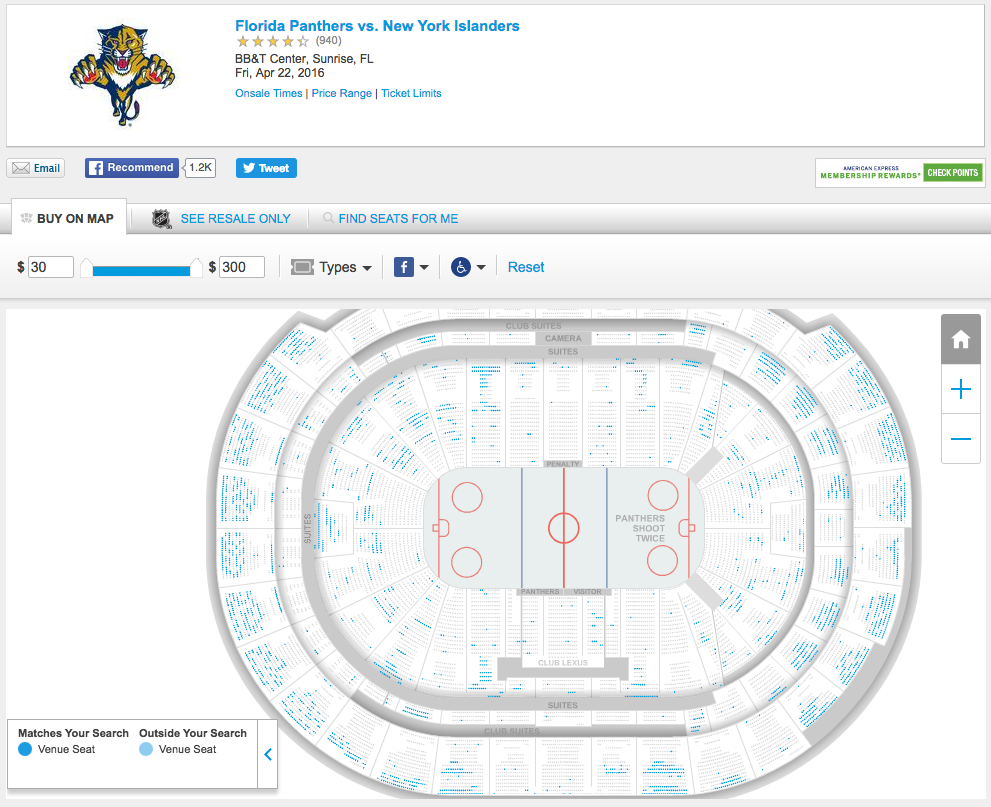 Friday night, your team is in the playoffs, and tickets are available for $30? That’s not a good sign.

Prust and Maripier on Hockey Wives

If you’re not watching the Hockey Wives show on the W Network, you’re missing out.

The reality show gives us a glimpse into the lives of a number professional hockey spouses.

Sure, macho hockey guys and haters of reality television will snicker at this, but there’s the occasional hilarious moment to be found. Lately that has been found from former Flames winger Brandon Prust’s fiancé, Maripier Morin.

Prust and Virtanen having a chat on @HockeyWivesTV #Canucks pic.twitter.com/M09kwlrPWw

Prust on @HockeyWivesTV: "He likes gracing people with his.." pic.twitter.com/tHZMSWuxn8

Is anyone surprised that Philadelphia Flyers fans littered the ice with something throwable given out to them?

This is Philadelphia. Their sports fans have a reputation that is well earned.

I mean, even their own PA announcer seems fed up with them…

Lou Nolan telling #Flyers fans to have some class. pic.twitter.com/4nAuQJybPU

They refused to stop, and took a penalty for their team.

The idea behind giving out the bracelets was a cool one, given they light up, allowing for this kind of a light show:

Speaking of class, Cal Clutterbuck of the New York Islanders wants reporters to show some.

"Hey, what the f***?!?" –Cal Clutterbuck to the guy who walked over the #Isles logo in the locker room.

This has long been a complaint of media. Teams put giant logos on the floor of their dressing room and have rules to not step on it.

I mean, that’s a great team-building mentality to have, but don’t make the media follow your unusual superstitions.

Superstitious baseball pitchers don’t get mad at teammates because they step on the foul line, do they? If you want to hop over it and look like a goof, that’s on you. Don’t expect others to follow.

If teams don’t want the media to step on a certain part of the floor, they should get a bouncer and some velvet ropes like the Blackhawks…

#Blackhawks have roped off the logo in the middle of their dressing room.

More on the topic of class: Andrew Shaw showed none of it last night.

After taking a late penalty in another Blackhawks loss to the St. Louis Blues, Shaw first flipped the rare double bird…

Then he showed a bit of homophobia to a national audience…

Shaw is getting raked over the coals today, as he should. He has apologized, but he should still be punished.

If the NHL is really serious about getting homophobic slurs out of the game, they should penalize it every time they can, not just the occurrences that are caught on television. If a referee or linesman hears something like this, and I suspect it happens a lot, call a penalty and hand out supplemental discipline.

That’s how you get rid of it.