These guys took the munchies too far, in what must be one of the laziest attempts to get marijuana past border services this year.

According to the Canada Border Services Agency (CBSA), on February 18, Detector Dog Comet went rummaging under the front seat of a vehicle crossing the border at Coutts.

There he found 4.6 grams of suspected marijuana – hidden inside a cracker box.

CBSA say they also found a small amount of suspected shatter, a marijuana derivative, in a traveller’s coat pocket. He was then arrested and turned over to the RCMP.

Among other interesting finds for the CBSA so far this year – a .357 pistol casually hidden in a camera bag thrown on the backseat. 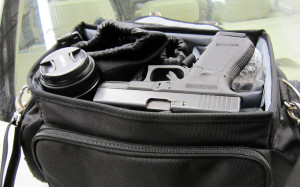 This gun was found ‘hidden’ in this camera case (CBSA)

According to the CBSA, in February officers at Coutts issued 78 work permits, landed 751 immigrants, and refused entry to 33 foreign nationals for various reasons, including criminality.