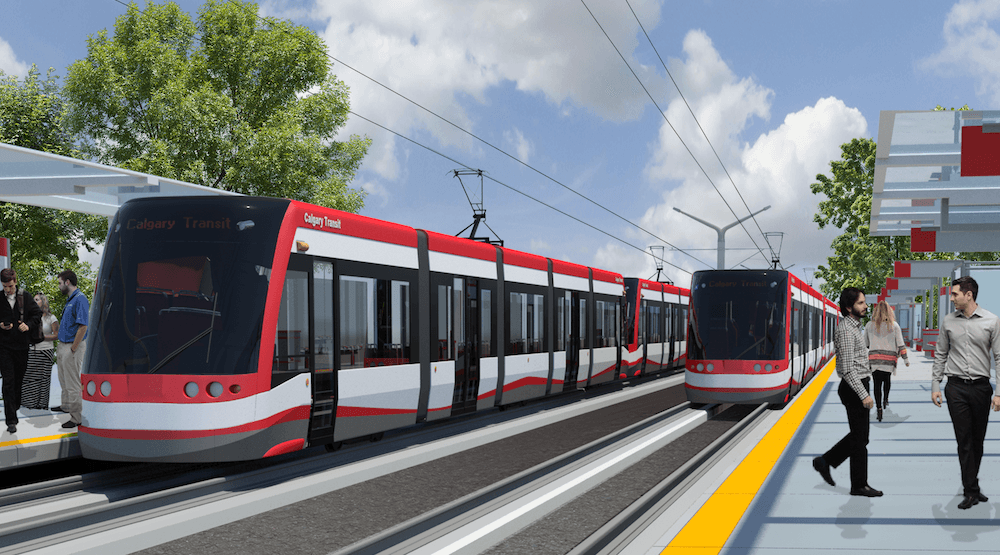 Artistic rendering of a ground-level station on the Green Line LRT. (City of Calgary)

If the challenge of constructing the central segment of the future Green Line LRT through downtown Calgary is not overcome, the northern segment could be built first instead.

A City of Calgary staff report ahead of a Wednesday city council meeting highlights this possibility, with city staff possibly conducting a feasibility review of building the North Pointe to 16th Avenue segment along Centre Street in the first stage of the project.

But without any ability to transfer to the CTrain, this means transit passengers travelling from Calgary’s northern suburbs towards downtown would have to switch from the LRT to a bus at 16th Avenue.

The city will consider further exploration of this option if the central segment from 16th Avenue to 4th Street is not resolved by January 2020.

Earlier this year, city staff stated there were greater challenges than initially expected with building the designated first stage from 16th Avenue North to Ramsay within the established budget. This segment — a four-km-long tunnel with four underground stations — would burrow under the Bow River, but it is hampered by technical issues, such as the need to remove and relocate major utilities that come in the path of the tunnel.

Without value engineering changes to the design, the underground portion of the central segment, as currently planned, would cause the LRT project to exceed its $4.9-billion budget by 10%.

City staff are considering scope-cutting options that include shortening the length of the tunnel by changing to a street-level LRT, changing the construction methods for reducing the depth of risk with underground construction, and even pursuing a bridge option for the Bow River crossing.

“Re-evaluating the design of this section of Green Line will ensure that the project remains on budget, manages risks, delivers benefits to Calgarians, and achieves the vision of the Green Line LRT project.”

To help achieve the project goals, the municipal government is appointing an independent technical committee to support the oversight of the project and provide additional review that assists with risk management.