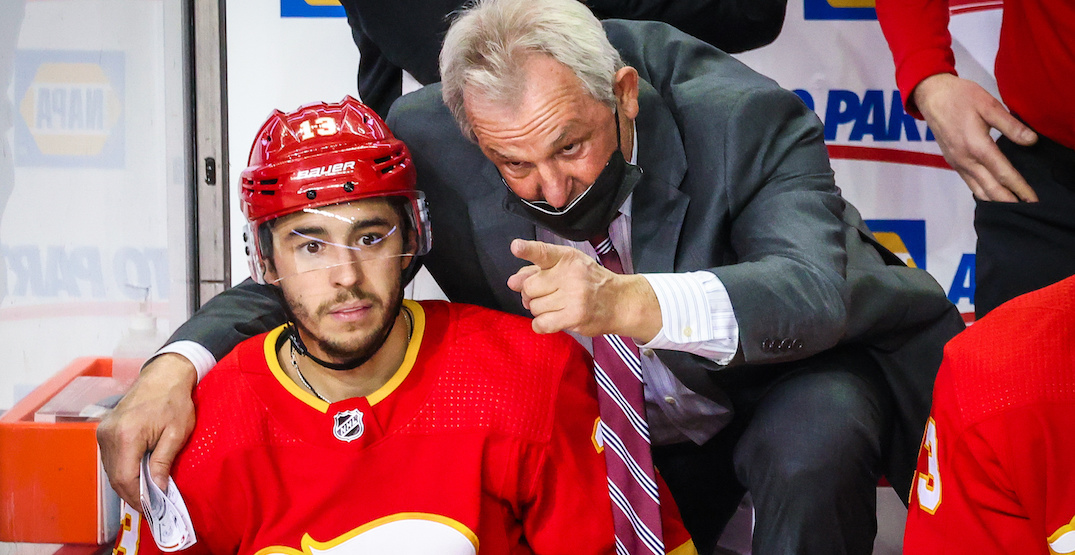 In the world of hockey, July is a month full of big moves, big decisions, and big consequences for National Hockey League clubs. This particular July — featuring free agency, the Seattle Kraken expansion draft, and the entry draft — will be of much significance to Calgary Flames general manager Brad Treliving as he hopes to get his club back to the post-season in 2021-22.

Here’s a quick glimpse at Treliving’s to-do list for July.

A 2011 draft selection, Johnny Gaudreau joined the Flames out of college in 2014 and has become one of the club’s offensive cornerstones. But with the Flames failing to move the needle in the playoffs (when they have qualified), some have pondered whether Gaudreau is a fit long-term or if the Flames should cut bait and get assets for their pint-sized powerhouse.

Gaudreau has one season remaining on a contract that pays him $6.75 million against the salary cap and he’s eligible to sign a contract extension when the league calendar flips over on July 28. However, that date also sees Gaudreau’s modified no-trade clause become active and allow him to name five teams that he’ll accept a trade to.

Simply put: the Flames need to have a good idea if Gaudreau’s future will be in Calgary before his no-trade clause kicks in and handcuffs their ability to get full value in the trade market. Gaudreau is one of the few pure offensive needle-movers the Flames have and locking him down long-term makes sense on the ice, but can they agree on terms that make sense for the salary cap, too?

With the Seattle expansion draft looming, Treliving will likely opt to protect three defencemen. Rasmus Andersson and Noah Hanifin are both young and signed long term. That leaves the last protection spot for either 37-year-old Mark Giordano, the club’s long-time captain and former Norris Trophy winner, or 31-year-old Chris Tanev, who was the club’s most impressive defender in 2020-21 and boosted every partner he played with.

Exposing Giordano risks the Flames losing a franchise icon and rolls the dice on his age and cap hit ($6.75 million) scaring the Kraken away from selecting him. Or it forces Treliving to expend an asset — likely at least a second or third round pick — to hold onto Giordano. Giordano is a fitness nut who has bucked the analytical aging curve for years and likely carries a few seasons of positive on-ice value, but Treliving will have to weigh the price of keeping him against the possibility that Father Time will finally catch up with Giordano in the near future.

If the price is modest, such a third round pick or a minor prospect, paying the Giordano ransom makes hockey sense. But a higher cost would be rolling the dice on Giordano remaining a top four defenceman as he nears the end of his current contract… and his 40s.

3. Stickhandle through the Seattle expansion draft

Giordano and Lucic will likely be the biggest names left exposed, but their ages and cap hits may turn off the Kraken — old school GM Ron Francis likely won’t rush out to give a division rival $5 million of cap space if he can avoid it. That leaves the Flames potentially losing one of their less prominent players such as Oliver Kylington, Matthew Phillips, Glenn Gawdin, or Spokane-born pending free agent Derek Ryan.

Of that quartet of youngsters, Kylington may be the most alluring player available. A second round pick in 2015 who’s been stuck behind Calgary’s glut of left-shooting blueliners, the Swedish defenceman boasts great hockey IQ and mobility but occasionally makes puck-handling gaffes. If Seattle can pair him with a stay-at-home type, he could offer them tremendous value at the NHL level.

One of Treliving’s strengths has been finding value at the NHL Draft. With the possible exception of 2014, which only produced Sam Bennett, the Flames have managed to find roster players frequently at the draft. The 2015 draft netted Andersson and Mangiapane. The 2016 draft saw them select Tkachuk and Dube. The 2017 draft had the selection of Juuso Valimaki, along with promising prospect Adam Ruzicka.

The Flames have four selections in the first three rounds this year, beginning with 12th overall. Will they grab another forward, as they have in their last two drafts — Jakob Pelletier in 2019 and Connor Zary in 2020 — or will they opt for a blueliner, as they did in 2017 with Juuso Valimaki? Or will they throw a major curveball and go for a goaltender early, which they haven’t done since 2006?

There are a few compelling players, all forwards, that could be available when the Flames draft in the first round: Canadian Cole Sillinger, Swede Fabian Lysell, Finn Aatu Raty, Russian Fyodor Svechkov, and American Matthew Coronato. For a Flames team that needs scoring depth wherever they can find it, any of these promising young scorers would be a good fit.

The Flames haven’t won a playoff round since 2015, when they took advantage of a favourable match-up to beat Vancouver in six games. They return to the Pacific Division in 2021-22, which features powerhouse teams Vegas and Edmonton and then a free-for-all for the remaining divisional playoff spot (and potential wild-card berths).

After several first-round exits and several playoff misses, the onus is on Treliving to upgrade his core in order to get past the Golden Knights or Oilers next season. After seven seasons without playoff success, and an expensive new building potentially on the horizon, another status quo summer likely won’t cut it for Flames fans or ownership.