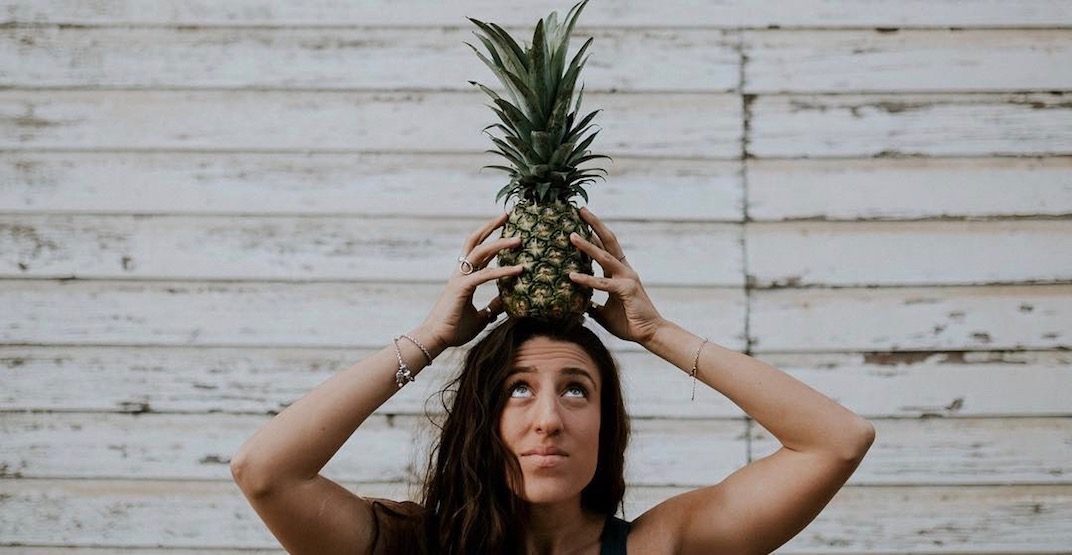 There’s a big chance you’ve already heard Maria Koutsogiannis, the chef behind uber-popular brand FoodByMaria, and if you haven’t, you’ve probably drooled on your phone scrolling by one of her Instagram posts.

Koutsogiannis is not only a talented plant-based recipe developer, chef, and food stylist, but also a huge body positivity advocate and has been transparent about her own personal struggle with bulimia and body dysmorphia, which is the over-arching theme in her new cookbook: Mindful Vegan Meals: Food is Your Friend.

“Fear not. Food is your friend.” That’s the mantra she rolls with, and it’s the one that she eventually proclaimed during her recovery by using nourishing foods and recipes to change her path.

It’s also something she kept in mind while creating the 75 fresh and flavour-packed recipes and accompanying photos in her first ever book, which officially drops June 12, 2018 (although pre-orders are available right now).

We got real with this local influencer and asked her a to share a bit more about her upcoming book and herself.

What are your favourite restaurants in Calgary?

Ten Foot Henry, Native Tongues, Donna Mac, and Jinya Ramen. They are all so accommodating and will turn anything plant-based for you!

If you had to only eat at one Calgary restaurant for the rest of your life what would it be?

Jinya – I could eat their Spicy Creamy Vegan all day, every day for the rest of my life but I would need a mixed greens salad with each bowl, please.

Favourite guilty pleasure of all time?

I have a thing for French fries and veggie gravy or cinnamon buns.

What chef do you admire most right now? Why?

I have around four people that I have looked up to since I was around 18.

What is an ingredient you feel is underrated?

Celery! Juice it. Cook it. Eat it. It’s unreal for us. Filled with antioxidants, enzymes, and so many amazing vitamins. Pro tip: Juice it with some lime, cayenne, and maybe an apple and drink it every morning. You can thank me later.

What was the hardest part of writing your cookbook?

Reliving my past. I found it really hard but surprisingly therapeutic to write down my story. Also, the fact that I thought I was going to fail and couldn’t do it. Leading up to the book I would whisper under my breath “they’ll still love you when you fail”… it was hard. I don’t really remember the last half of 2017 because it was so fuzzy, stressful and scary. BUT, I fucking did it!

How did you decide on the title?

It was decided by my moto, Fear Not. Food Is Your Friend.  These recipes are all made with love, built around my story and struggle, I want everyone to know that there is nothing to fear when it comes to food.  With a touch of mindfulness, we can all learn a lot.  My recipes will teach you a lot about self-love, relatability, and how powerful positivity when eating really is.

Do you have an all-time favourite recipe in your book?

I have two. The ‘Greek Style Jackfruit Gyros’ and the ‘I’d Rather Be in Mexico Vegan Tacos’.

Most important tip when food styling for photos?

Use the freshest ingredients possible. Make sure they have a pop of colour and look super crisp. People eat with their eyes, make that shit beautiful!

Where do you go to get produce and supplies for cooking and baking?

Where don’t I go? Everywhere! Sunny Side Market, Community, sometimes Safeway, Superstore, and even Asian markets and European specialty stores. I don’t discriminate, I just love food and want people to know they can access it anywhere.

What’s the most important message you hope to communicate with your followers/readers?

Nothing in life is permanent but change. This moment will change. It will be ok.

You can pre-order Mindful Vegan Meals: Food is Your Friend right now on Amazon before it officially drops on June 12, 2018.