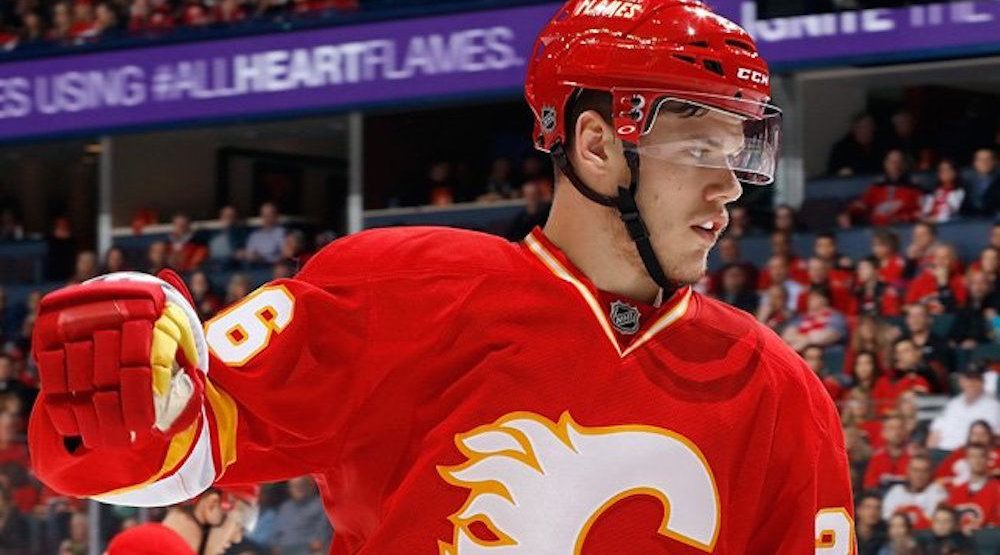 It would be a safe bet to say that Calgary Flames prospect defenceman Tyler Wotherspoon has spent more time in boarding zones than defensive zones over the course of the past two seasons.

But, it looks like his dreams of playing in the Flames organization will continue for at least one more year after signing a new contract on Monday.

Up for a new contract as a restricted free agent, the Flames waited to make a decision on Wotherspoon and elected to offer a one-year, two-way contract worth $625,000.

A second round draft pick in 2011 by Calgary, Wotherspoon was a promising prospect coming out of junior with the WHL’s Portland Winterhawks.

After being sent back to junior for seasoning, Wotherspoon transitioned well to the AHL, playing in 48 games and putting up 9 points and 12 penalty minutes with the Abbotsford Heat.

The Surrey, BC native was called up to the big club in March of 2014 and impressed Flames brass with four assists in 14 games to begin his career. Wotherspoon suffered a setback however, as he suffered a serious, season-ending shoulder injury that required surgery.

Rehabbing during the offseason, Wotherspoon was poised to fight for a full-time NHL job when training camp opened back up in the fall. But it never seemed to click for Wotherspoon in 2014-15.

Still on the brink of becoming a full-time Flame, Wotherspoon’s position on the depth chart was challenged during the 2015 NHL Draft as Calgary selected defencemen Rasmus Andersson and Oliver Kylington in the second round.

It was back to the AHL for Wotherspoon to begin the 2015-16 campaign, where he was now one of the most experienced defenders on the Stockton Heat with over 100 minor league games under his belt.

It wasn’t until February 19th that Wotherspoon earned his first call-up on the 2015-16 season, and actually played strong minutes in six games before being sent back down. Calgary called the now 23-year-old two more times before the end of the season, playing in five additional games with one assist before being sent back to Stockton for the final few weeks of the season.

Despite almost doubling his career NHL games played mark to 26, it’s still up in the air whether Wotherspoon will finally get a crack at playing a full season at the Scotiabank Saddledome.

The #Flames have signed defenceman Tyler Wotherspoon to a one-year contract ~ https://t.co/YJHHeeG4vY pic.twitter.com/wKdCkMZu1H

Now on his second career contract, Wotherspoon is expected to be this year’s Joni Ortio for the Flames.

If Calgary decides Wotherspoon is not ready for the rigours of a complete season, they may send him back to Stockton but it could come at a cost. Waiver eligible for the first time in his career, all 29 teams would get a chance at claiming the two-way rearguard if he’s moved down to the AHL.

Another area that could prove troublesome for Wotherspoon is a large concentration of serviceable, if not average blueliners currently employed by the Flames.

With such competition for minutes unused by the likes of Mark Giordano, TJ Brodie, and Dougie Hamilton, this group of players has struggled to find consistent NHL action.

“You’re always curious what’s going on around you,” Wotherspoon said. “It’s kind of my job to see what the situation is and go about it that way. I don’t look into it religiously or anything like that. When it comes down to it, it’s about how I play and how I perform on the ice. If I play well and do good, my actions will speak louder than what the numbers are.”

With Smid still dealing with injury issues and the Flames opting not to bring Nakladal back into the fold, the 2016-17 season could be the breakout campaign Wotherspoon has been looking for.

Wotherspoon isn’t likely to ever challenge for the Norris Trophy with his offensive numbers, but defensively he has been improving and seeing his minutes per game rising close to 15:00 in large stretches last year.

An RFA at the conclusion of the 2016-17 contract once again, this could be a make or break season for the shutdown defender.

Called up nine times over the last three seasons, it will be interesting to see if the Flames will risk Wotherspoon’s new waiver eligibility by sending him back to the AHL.

But after years of indecision on Wotherspoon, it might be time for Calgary management to finally make a decision on one of the organization’s top defensive prospects.