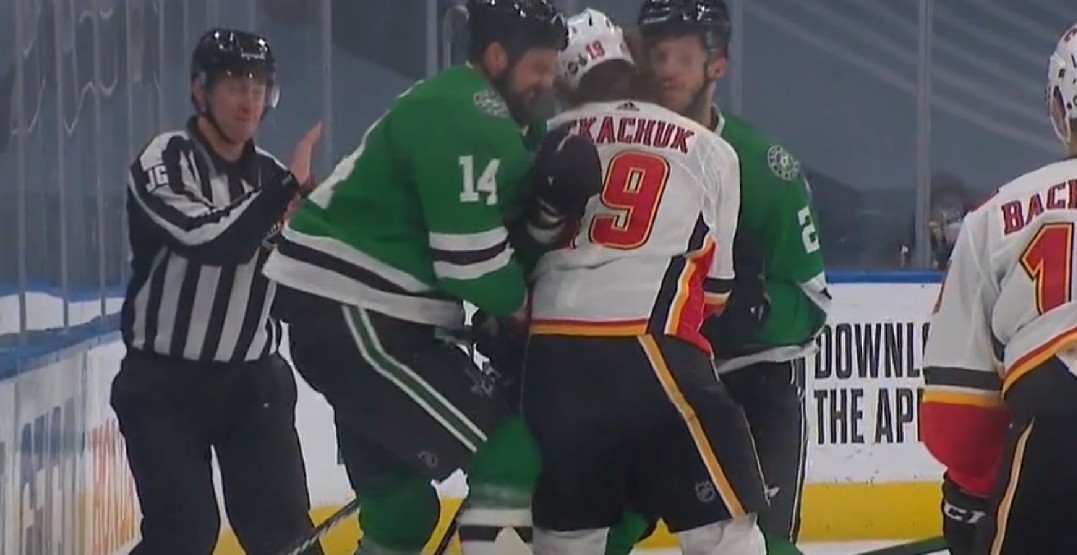 It was a wild third period, but the scales did not tip in favour of the Calgary Flames in Game 2.

Calgary couldn’t quite complete the third-period comeback, falling to the Dallas Stars in Game 2 of their first-round NHL playoff series by a final score of 5-4.

With the victory, Dallas pulls even in the series, tying things up at one win apiece.

Calgary found themselves trailing 4-2 as they entered into the final frame, but wouldn’t go down without a fight.

The boys in red were able to claw their way back, tying things up at 4-4 with goals by Tobias Rieder and Sam Bennett.

But it was Stars defenceman, Jamie Oleksiak, who put the nail in the coffin scoring the game-winner with under one minute to go in regulation.

Oleksiak may have done more damage than just on the boxscore for Flames fans after Matthew Tkachuk appeared to sustain an injury midway through the third period after colliding with the big defenceman.

Matthew Tkachuk went back down the tunnel after getting sandwiched between Benn and Oleksiak. #NHLonSN pic.twitter.com/7lEF5PID2B

Tkachuk was heading in for a big body check on Dallas captain, Jamie Benn and just as he made contact, Oleksiak, skated in to throw a hit of his own, sandwiching the Flames forward.

It appeared that Tkachuk’s head collided with Oleksiak’s helmet during the play, which notably shook up the Flames’ forward. Although Tkachuk was able to skate off the ice under his own power, he clearly seemed wobbly as he made his way straight to the bench and into the locker room.

He did not return during the contest.

“We could have used him, I mean he does an awful lot of things for us,” said head coach Geoff Ward of Matthew Tkachuk’s absence down the stretch of Game 2.

Ward added, “there’s a lot of things that he brings to the table and for him not to be able to finish the hockey game, for us, it’s a hole.”

At this time, the team hasn’t provided an update on whether Tkachuk will be in the lineup for Game 3 on Friday night.

It wasn’t the easiest night for Tkachuk even prior to his collision with Oleksiak, as he also left the game in the first period after taking a jab from the stick of Benn.

As for the rest of the game, the Flames were playing from behind most of the night.

Calgary got off to an extremely fast start after Dillon Dube scored just 19 seconds into the contest – a Flames franchise record for the fastest goal scored in a playoff game.

The kid continues to get it done. pic.twitter.com/1ePtQDyrf0

That becomes Dube’s fourth goal of the postseason, finding the back of the net in three straight contests. The kid has also scored the opening goal in each of those three games, becoming the first NHL player to do so in the Stanley Cup playoffs in 12 years.

Despite jumping out to the early lead, Calgary was seemingly outplayed in the first period as Dallas came out in Game 2 with a sense of urgency.

Then, rookie Miro Heiskanen put Dallas up 2-1 at the midway mark of the frame with a wicked shot that snuck under the glove of goaltender Cam Talbot – the first playoff goal of his career.

Heiskanen would add another in the second period, becoming the fourth-youngest defenseman in NHL history to score multiple goals in a postseason game.

Another career first came off the stick of Derek Forbort for Calgary, when he potted his first-ever postseason marker to make it 3-2 near the game’s halfway mark.

Despite being outshot 36 to 26 on the night, the Flames showed signs of life in the third – making a push and fighting their way back into the game with two straight goals.

Along with the goals from Rieder and Bennett, Andrew Mangiapane also managed to get a puck by Stars’ goaltender Ben Bishop at one point during the final frame, but it was disallowed as a result of a kicking motion.

With the teams locked at 4-4, it was looking like we were going to need some coffee with overtime looming, but that is when the valiant comeback was put to rest.

That PASS tho 🤯#GoStars pic.twitter.com/VFQMz56PMF

Oleksiak’s dagger came with just 39 seconds left on the clock.

“They came with heart. They outplayed us in the first and second. We had a great push-back and it’s unfortunate we couldn’t take it to overtime,” said Bennett following the loss.

Calgary won’t have a lot of time to dwell on Game 2 as the Flames will be back in action for Game 3 against the Stars on Friday night at 8:30 p.m. MT.

“It’s great to be able to play tomorrow and put this one behind us,” added Mark Giordano.

The Flames won’t have a lot of rest before Game 4 either, which is scheduled for 12 p.m. MT on Sunday – making it three games in just over 60 hours.