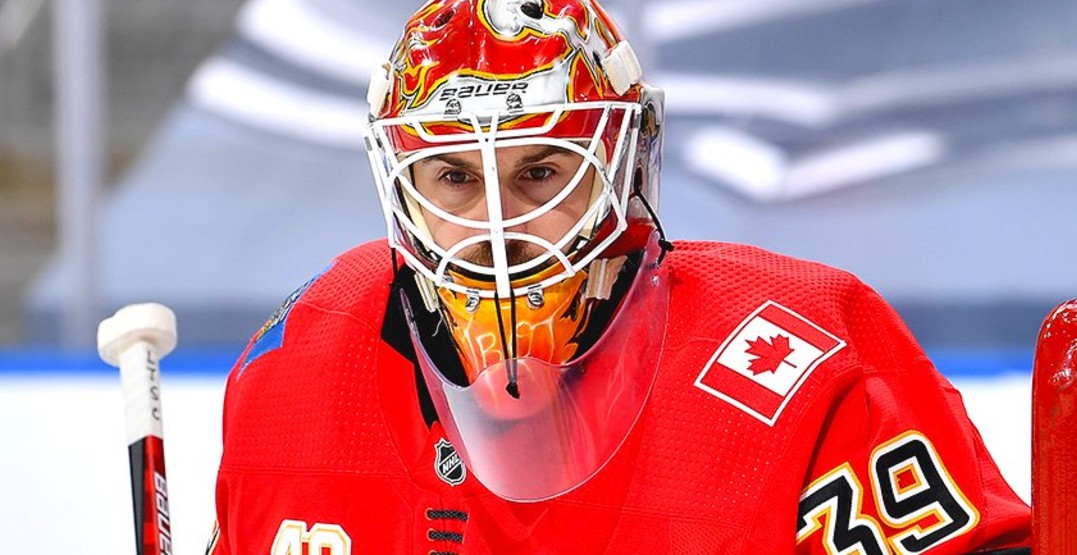 On a low-scoring night for both teams in Game 3, it was Cam Talbot who shone the brightest.

Talbot backstopped the Calgary Flames to a Game 3 victory over the Dallas Stars, stopping all 35 shots he faced en route to a shutout and a final score of 2-0.

Despite playing on the second night of a back-to-back, Flames head coach Geoff Ward opted to ride with Talbot, proving to be an impeccable choice. The red-hot goaltender’s shutout victory propelled Calgary to take a 2-1 series lead heading into Game 4.

The goose egg marked Talbot’s fourth playoff shutout of his career and the second of the 2020 NHL postseason.

The 35 saves also marked the most stops Talbot has made in a playoff shutout.

“When you have a goalie playing like Talbs’ is playing, it gives you confidence as a team,” Sean Monahan said of his goaltender’s performance.

“We can rely on him back there, we don’t want to rely on him too much, but tonight was another one where he stood on his head and kept us in the game all night,” added Monahan.

Young forward Dillon Dube, who had been on a hot-streak himself prior to this game, also had high praise for his goaltender.

“He was lights out,” Dube said during a postgame press conference. “Right from the start, I think he kept us in for a lot of it…I think he was the key to our win tonight.”

Talbot’s 35-save shutout is the second-most in Flames franchise history, just behind Mikka Kiprusoff who made 38 saves in a shutout against Detroit back in 2004.

Cam Talbot now boasts 2 playoff shutouts of 30+ saves as a member of the #Flames pic.twitter.com/iU8k0DHBSX

On the offensive end, the Flames tallied one goal in the second and one for good measure in the third in order to put things out of reach.

It was a hard-fought game that remained scoreless until the second frame when Mikael Backlund broke the drought shorthanded — a goal that Stars goaltender Anton Khudobin definitely will want back.

Backlund made a great move, undressing Stars forward Corey Perry, and the resulting shot on goal proved to be elusive enough to squeak past Khudobin and put the Flames up 1-0.

Backlund’s tally turned out to be the game-winner as well, with Calgary never looking back following the goal.

The second period, particularly, turned out to be Talbot’s brightest moment as Dallas outshot the Flames 16-4 in the frame but came up empty.

In one of the weirder events of the evening, Stars forward Blake Comeau smashed a chunk of the rink glass when he whacked it with his stick out of frustration.

Okay so here's the deal:

➡️ The glass is getting repaired
➡️ They'll play the 38.1 seconds left from the 2nd after the break
➡️ Then we'll start the 3rd period

The incident took place with 38.1 seconds left in the second period and instead of waiting for it to be replaced, the teams headed to the dressing rooms for intermission. When they returned to the ice, the squads played the remaining time of the second period before resetting and starting the third.

In the third, Dallas showed up, but they were met by a gritty Flames team that refused to give anything easy.

T.J. Brodie was able to fire a powerful slapshot, just beyond the midway mark of the period, beating Khudobin and putting his team comfortably ahead 2-0.

Khudobin, making his first start of the series in the place of Ben Bishop, finished with 21 saves on the night as the Flames skated to the win.

Calgary was playing without star Matthew Tkachuk, who left the ice in Game 2 with what appeared to be a head injury sustained after a collision with Stars defenseman Jamie Oleksiak.

As an added bonus, for any hockey fans keeping track, the Calgary win means it was a clean sweep for teams located north of the border. Canadian clubs Montreal, Vancouver, and Calgary all earned wins in their respective series on Friday night.

The Flames will get Saturday off from playoff action but will be back on the ice in a matinee affair on Sunday for Game 4.