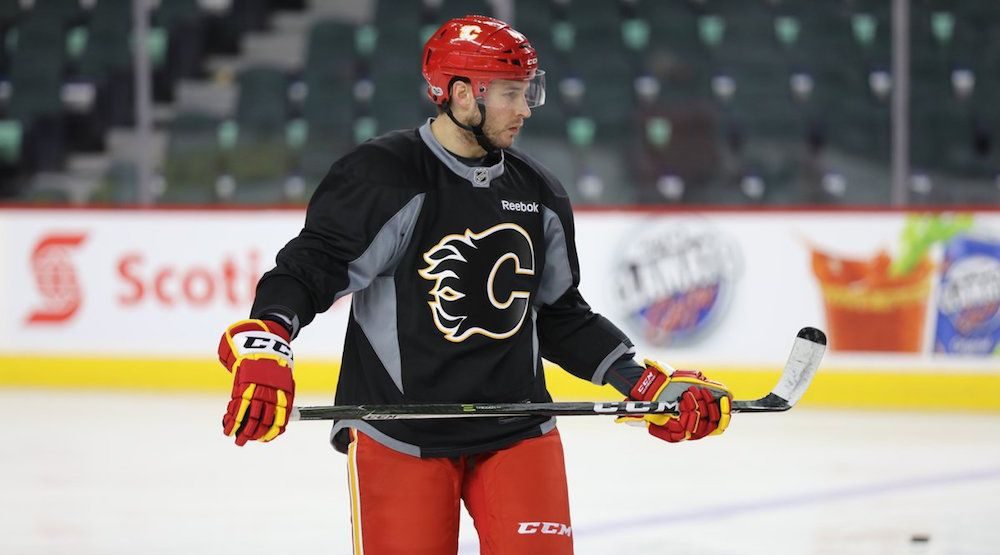 Dust off those depth charts, as the Calgary Flames are poised to officially add another body to the blue line.

The #Flames have signed defenceman Matt Bartkowski to a two-year, two-way contract! https://t.co/yYmRcbLngK

On Wednesday, the Flames offered a professional tryout to 28-year-old defenceman Matt Bartkowski who has spent the season with the American Hockey League’s Providence Bruins.

On Thursday, they announced that they have signed the 28-year-old defenceman to a two-year, two-way contract.

Playing 211 career NHL games with the Boston Bruins and Vancouver Canucks between 2010 and 2016, Bartkowski has carved out a reputation as a depth blueliner who can eat away at some minutes to help out the top pairing guys.

Although not noted for his offensive prowess with just six regular season goals over his career, all scored last year with Vancouver, Bartkowski could be another option defensively for the Flames.

Whether that be on the ice, or in the boardroom.

If not for a decision made by Flames legend Jarome Iginla on March 27, 2013, Bartkowski could have already been a mainstay in Calgary’s lineup.

The smooth-skating blueliner was rumoured to be part of a package including Alex Khokhlachev and a first round pick offered by the Boston Bruins as they tried to acquire Iginla at the 2013 trade deadline.

While it looked to be a done deal, Iginla instead used his no-trade clause to force a move to the Pittsburgh Penguins.

Yup, the same Matt Bartkowski who thought he’d been traded to Calgary on March 27, 2013, the night Jarome Iginla was swapped to Pittsburgh.

And like a Hollywood blockbuster (or at least a direct to video remake), Bartkowski now has the opportunity to crack the Flames lineup four years later.

Scouting website Elite Prospects had this to say about the NHL veteran:

A defensive defenseman that works hard for his ice time. Throws his weight around and, while not the prettiest skater, is mobile at a professional level. Calm and poised with the puck, but not usually relied upon to provide a consistent level of offense. His shot could use some work. Decision making stands out as a respectable part of his game.

Bartkowski will likely battle with Jyrki Jokipakka, Brett Kulak, and Deryk Engelland for time on the Flames bottom pairing.

One reason why Bartkowski might be asked to put pen to paper on a contract, is that he and Flames bench boss Glen Gulutzan were both with the Canucks organization last year.

“He’s a great skater, he’s a fantastic skater,” Gulutzan told reporters on Wednesday. “In Vancouver we used him a little bit on the penalty kill, not much on the power play. But, he’s a guy that can move and is very mobile so we’re just going to see where it goes. But as far as in my role in it, certainly knowing the player and having him for a year, [we] knew what kind of a person he was so I vouched for that.”

Add to the fact that he also played with Dougie Hamilton and Chad Johnson while with the Providence Bruins, and that gives a lot of voices potentially putting in a good word to Calgary GM Brad Treliving.

One widely reported theory of why the Flames would potentially offer Bartkowski a contract this late in the season has to do with the looming Vegas Golden Knights expansion draft.

With the Flames likely holding onto Mark Giordano, T.J. Brodie, and Dougie Hamilton, that would mean blueliners like Jokipakka and Engelland would be up for grabs.

Signing Bartkowski would provide another option for the upstart Golden Knights, if they opt to go with a defenceman rather than a forward from Calgary. Perhaps that’s why he was signed to a two-year contract.

On Matt Bartkowski PTO with CGY, I won't be at all surprised if he signs two-way NHL deal. Would provide cheap depth, plus exp draft fodder.

Calgary did this earlier this year with Chris Higgins, Douglas Murray, Lauri Korpikoski, and Nicklas Grossmann who actually played in a handful of regular season games for the Flames.

The difference with those players was they were put on PTOs and ATOs during the pre-season when rosters were still very fluid, compared to the post all-star break period.

“At first it was kind of… strenuous or whatever you want to call it just not being in the NHL,” said Bartkowski. “But, you got to know where you are. I was in the NHL, I was playing hockey, and it was out of my hands of where can I sign and this and that other than my place. So, I just had to focus on where I was, play my game and hopefully something would happen, and sure enough it did.”

Although Bartkowski won’t put up Brent Burns-esque numbers, another body on the Flames roster might not be the worst idea as Calgary makes a push for the playoffs.

#Flames TV checked in with defenceman Matt Barkowski after he signed a two-year deal with the team! pic.twitter.com/t2poN6SlQD