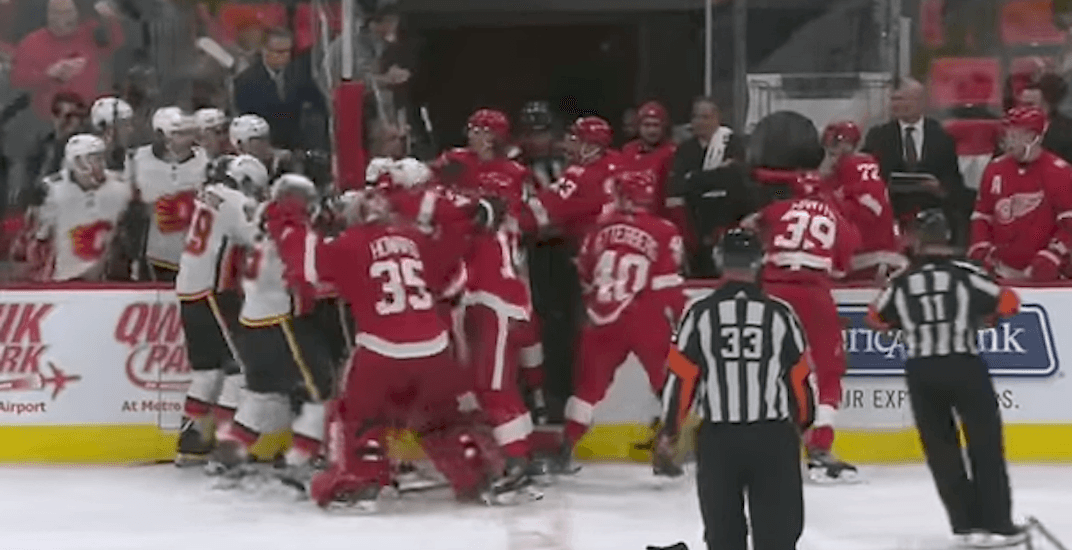 The Calgary Flames and Detroit Red Wings turned back the clock on Wednesday for a good old fashioned line brawl.

Everyone was seemingly into it, after the Flames took exception with what Red Wings winger Luke Witkowski did to defenceman Brett Kulak.

After Kulak was already knocked down to the ice in a third-period fight, Witkowski grabbed him and slammed him down again. This angered the Flames right away, with Travis Hamonic yelling at Wiskowski, nearly leading to another fight.

Witkowski was ushered off the ice, but would return. And that’s what has him in hot water with the NHL.

Witkowski has received a 10-game suspension for coming off the bench to participate in an altercation. It’s an automatic suspension that the NHL has had in place for years to prevent bench clearing brawls.

The Flames bench was yelling at Witkowski, and Matthew Tkachuk whacked him on the leg with his stick as he was skating off.

Sportsnet’s Nick Kypreos reports that Tkachuk could also face discipline from the league – he has a hearing on Friday – but certainly not as severe as Witkowski’s.

The melee, which occurred during the commercial break of a Sportsnet broadcast, also included both goalies – Jon Gillies and Jimmy Howard.

Hamonic eventually dropped the gloves with Anthony Mantha, before the Flames defenceman fell through the bench door that had been left open.

Here’s a look at the full brawl: