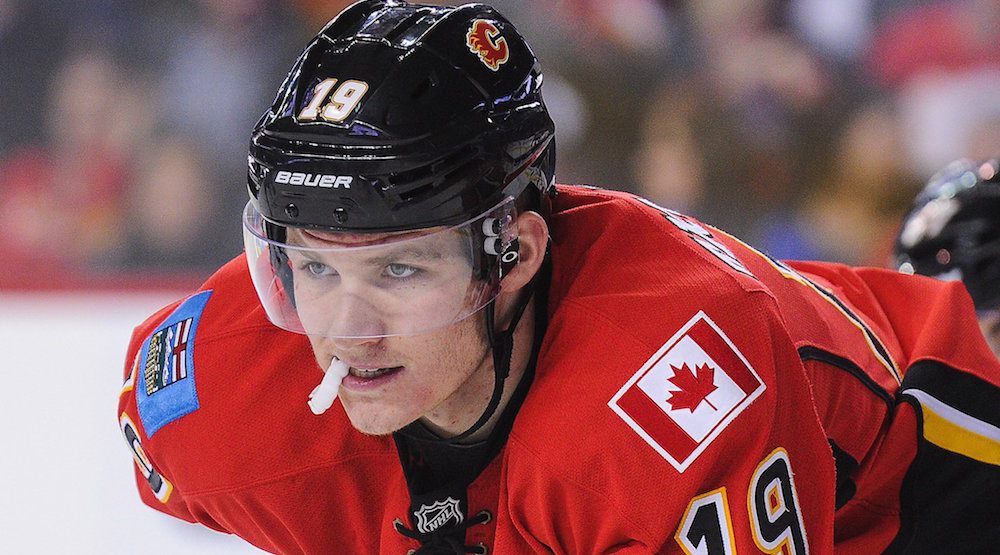 Matthew Tkachuk’s play harkens back to a time when the NHL was directed towards a more rough and tumble atmosphere.

When being, as Brian Burke would put it, ‘truculent’ was just as important as speed and skill on the ice.

In a little over one season of professional hockey experience, the Calgary Flames sophomore has put himself in the category of some of the top pests in the league.

Brad Marchand, Ryan Kesler, Tkachuk; they’re all players that other teams love to hate for their ability to walk the line between agitating and outright dirty play.

But this article isn’t about the 19-year-old’s ability to get under the skin of his opposition, it’s about how he’s quietly becoming one of the most reliable players with the puck in the entire NHL.

When Tkachuk was drafted by Calgary in the summer of 2016, plenty of scouts drew comparisons between the younger Tkachuk and his all-star father Keith.

Physical, offensively gifted, and aggressive were all words to describe both members of the Tkachuk family on the ice.

So far Matthew has lived up to that billing, scoring 58 points in 91 games while adding 119 penalty minutes.

While it’s been his play away from the puck that’s garnered headlines over the last year such as his rivalry with Los Angeles Kings all-star Drew Doughty, it’s his skills with the puck that are helping to drive the Flames’ offence.

Out of the gates, Tkachuk is proving to be one of the top possession players in hockey.

In 76 games during the 2016-17 season, Tkachuk led all NHL rookies with over 25 games played in Corsi percentage with 55.9% at even strength.

This means the Flames have possessed the puck for almost 56% of the time Tkachuk has been on the ice, which is well above the standard which sits around 50%.

Tkachuk has been even better to begin play this season, sitting at 58.4% through 16 games which puts him among the top 25 forwards in the league.

Mike Smith on Tkachuk "That kid’s like the heart and soul of this team… He’s a feisty little bugger. It’s fun that he’s on my team now."

A large part of this success at both ends of the ice can be attributed to his almost instant chemistry he formed with line mates Mikael Backlund and Michael Frolik.

Dubbed the ‘3M line,’ the trio has been Calgary’s most consistent line since the beginning of last season and have combined for 28 points to begin the 2017-18 campaign.

One of the most impressive parts of Tkachuk’s early season offensive success with 11 points in 16 games, has been the effort needed to get into the attacking zone by his line.

Tkachuk’s starts have mostly come in the defensive zone, with over 58% of his faceoffs coming in Calgary’s end of the ice.

This means Tkachuk and his line mates have been adept this year at not only winning draws in their defensive zone, but keeping possession of the puck and moving into the attacking zone to generate scoring chances.

And the scary thing is there’s potential for Tkachuk to be playing at a better pace, with his shooting percentage still hovering below 9%.

With the league average bouncing around 10%, there’s still plenty of opportunities for Tkachuk to find the back of the net.

A lot of that opportunity is coming on Calgary’s power play, with the St. Louis product averaging around 2:20 per night on the Flames’ second unit.

Trailing only Johnny Gaudreau and Sean Monahan in points through 16 games, it’s easy to see that head coach Glen Gulutzan is relying on his sophomore winger more and more.

Of course this hasn’t been without growing pains, as Tkachuk still has a tendency to step beyond his boundaries and cost his team with ill-advised penalties.

The most glaring of these coming last month against the Carolina Hurricanes, when he took an unnecessary penalty at the end of the second period which led to a Justin Williams goal.

But the trade-off for those moments comes in the form of his game-breaking ability, which was displayed just a few nights ago when Tkachuk finished off the New Jersey Devils with a slick shootout winner.

Following the game, Tkachuk said he tries not to get too riled up when waiting for his chance to make an impact in the shootout.

“It’s fun, it’s pretty stressful,” said Tkachuk. “But, I’m way more nervous watching the guys ahead of me and the guys on the other team go than when I’m out.”

Tkachuk is on pace to score around 60 points this season, which would be a strong jump from the 48 points he scored as a rookie.

Given his style of play, it’s unlikely that Tkachuk will ever challenge for the NHL scoring championship, but he’s already proven to be a dynamic offensive creator for the Flames.

It’s a shame that his offensive prowess sometimes gets lost for the grit and sandpaper he shows on a nightly basis, even though that’s an aspect of his game that Flames fans love.

And with a big six-game road trip coming up, the Flames will need that offensive ability to keep pace in the Pacific Division.