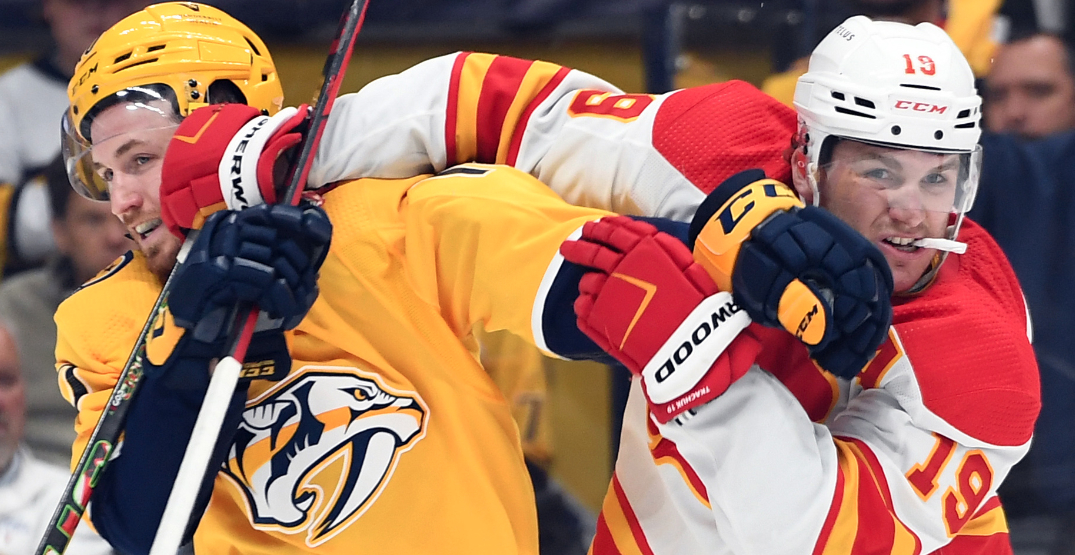 And then there were, officially, two.

The Calgary Flames will play one of two opponents in the first round of the Stanley Cup Playoffs, an almost identical split in odds between the Nashville Predators and Dallas Stars.

The Flames have a 51.3% chance of hosting the Predators in the opening round of playoffs, and a 48.7% look at welcoming the visiting Stars.

Either make an intriguing matchup for the Flames, who have long clinched a berth and were assured the Pacific Division title last week to set up a date with the first wild card into the playoffs from the Western Conference.

Both have faced the Flames recently, too, giving Calgary a close-up look at a potential opponent when the playoffs start next week.

Here’s a look at each.

Technically, Dallas has yet to clinch a berth in the playoffs, though it sits equal with Nashville at 95 points entering action Wednesday. The Predators hold the tie-breaking edge because of their 35 regulation wins, whereas the Stars sit at 30. The Vegas Golden Knights could, in theory, catch Dallas in points and overtake the wild card spot based on the same time-breaker, though those odds aren’t likely.

“They have a lot of good players up front,” Flames blueliner Noah Hanifin said in February. “They’re a really good team on paper. Even their D, they’ve got a lot of real mobile defencemen on the back end that can jump into the play and create odd-man rushes.

“They have some really good veteran forwards up front that have been around for a long time and have had success.”

In the odds-and-ends department, Dallas is the NHL’s second-best faceoff team at 54.6%. They’re in the upper-half of the league in terms of limiting shots against and are slightly above average in generating shots themselves. The Stars are also the league’s least penalized team, spending just 543 minutes in the box by way of 247 penalties taken, though their penalty kill ranks 18th in the league at 79.1%. Their power play, at 22.1%, ranks 12th.

Nashville, unlike Dallas, has already secured its spot in the playoffs and cannot be caught by the Golden Knights. That means the Predators are guaranteed to face either the Flames or the Central Division and Western Conference-leading Colorado Avalanche. Only five teams in the West have more regulation wins than Nashville’s 35.

None of those 35 came at the expense of Calgary.

The Predators, however, went 2-0-1 against Calgary, picking up five of a possible six points. Each team scored nine goals in the series, which includes a Predators’ 3-2 overtime win at Calgary on November 2, a 3-2 shootout win at Nashville on April 19, and Tuesday’s 5-4 overtime loss at Bridgestone Arena. Calgary limited Nashville to an average of 24.0 shots per game in the three-game set while firing 33.0 on Predators goaltenders.

A game that had a little of everything is hard to sum up so pls watch our highlight pack if you missed tonight's win in Nashville!#Flames | @scotiabank pic.twitter.com/jM3EBih1is

Playing twice in the span of a week might’ve added some spice to the latter two meetings. The Flames and Predators combined for 74 hits in Tuesday’s thriller.

“This game wasn’t going to be one that you just go through the motions,” Calgary forward Milan Lucic said. “They’re playing to clinch a playoff spot, and it’s a possible first-round matchup. I think everyone here and who watched on TV got their money’s worth. I’ve got to say… I’ve played over a thousand games now, and that’s probably a top-five game I’ve been a part of with the goals, the hits, the fights, the emotion, the crowd. It was a great game to be a part of.

“If we play them, if we don’t play them, whoever we play, it was definitely a playoff-type game.”

It shouldn’t come as a surprise.

On paper, the Stars have the easier slate remaining on their schedule. They play both games at home against non-playoff teams in the Arizona Coyotes on Wednesday before closing out the docket against the Anaheim Ducks on Friday.

The Predators also have two games remaining — both on the road and both without Saros. They’ll visit the Avalanche on Thursday before closing out in Arizona on Friday.

Whoever fetches the most points out of the remaining two-game set will face the Flames, while a tie will see Nashville travel to Calgary to open the playoffs, while Dallas will fly to Colorado.