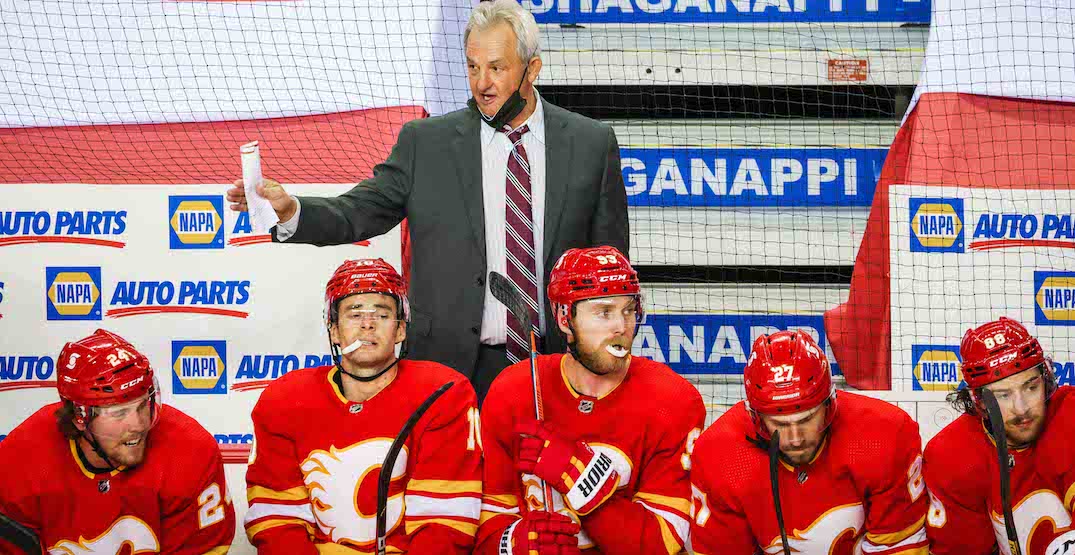 In any normal NHL season, 40 games down would mean the Calgary Flames would be nearing the midway point of their year.

That’s obviously not the case this spring for the Flames, who have fallen further and further out of the North Division’s playoff picture over the past month and are facing an uncertain future.

Calgary has now dropped nine of their last 10 games in regulation, unable to keep up offensively with the Toronto’s and Edmonton’s of the world, and defensively they have been a mess.

The Leafs add one more on top of this and lead the #Flames 4-2. pic.twitter.com/zd7CkAPYvw

For the Flames, the parachute looks poised to be pulled with 16 games remaining on what has been a season to forget.

Calgary will be classified as a seller before Monday’s trade deadline, but getting assets will be more difficult than previous years due to the Canada-USA border restrictions and many teams under orders from ownership not to spend.

A seller’s market is something that likely won’t benefit the Flames, who will be trying to sell off at least a few pieces for prospects and picks.

Stars like Johnny Gaudreau and Sean Monahan certainly have uncertain futures with the Flames and that will be a story to watch moving forward, but make no mistake, neither are likely to move at this year’s deadline. They’re more likely to be offseason targets for other teams.

With that said, here’s a closer look at four Flames players who could be on the move before the deadline.

Involved in numerous trade rumours this year, Sam Bennett’s season has been a tumultuous one to say the least.

Bouncing between top line duties and a healthy scratch under Geoff Ward, Bennett has been slightly more productive with Darryl Sutter as his coach with four points in his last five games.

Bennett was asked about his alleged trade request from earlier this season this week and basically said he’s glad to be getting more looks under Sutter and that he’s not focusing on where he might be dealt to.

The now 24-year-old Bennett has been a fascinating player for the Flames over his career, playing all throughout the lineup but struggling to find a role as either a scorer, energy player, or grinder.

Set to become a restricted free agent at the end of the season, it might be time to set Bennett sail for a change of scenery with just 10 points in 37 games in what’s been a make-or-break season of sorts.

Pittsburgh and Carolina seem like solid matches for Bennett, but likely with his slow production a mid-round draft pick and a middle-tier prospect is likely all Calgary could recoup.

David Rittich’s story of rising from an unknown free agent signing from the Czech Republic to eating big minutes with the Flames is an inspiring one.

Over his three seasons with the Flames, ‘Big Save Dave’ has become a lovable character in the locker room and a netminder who can steal the odd game when he’s trending in the right direction.

Rittich’s future in Calgary has been essentially relegated to a backup role with the high profile signing of Jacob Markstrom in the off-season to a six-year contract.

In the 15 games he has played in the Flames net so far this season, Rittich has been fairly inconsistent winning just four of those games and compiling a 2.90 goals against and a .904 save percentage.

Calgary still values him as a goaltender however, and could possibly pick up a third or fourth round pick or a lower-tier roster player from another team to make the money even out.

Heading into the playoff, teams are always searching for some stability between the pipes, pushing a couple dance partners like Boston, Colorado, and maybe even Nashville to the front of the line.

Since signing a three-year, $9.375 million contract with Calgary in the 2018 off-season, it’s difficult to say Derek Ryan has lived up to that lofty contract.

Playing mostly in a bottom-six role, Ryan has been a serviceable player for the Flames with seasons of 38 and 29 points but those numbers aren’t exactly what you’d expect for a player making over $3 million per year.

Now, that’s not to say he hasn’t been a fine energy player but his contract is likely one Calgary could use coming off the books at the end of the season.

Rock solid in the face-off dot this year at over 57 percent, Ryan can be a valuable third or fourth line centre for a team looking to make a run in these strange playoffs ahead.

The real sticking point will be which team can pick up his cap hit, I’d imaging a roster player would have to come back to Calgary if that were to be possible.

Add the Florida Panthers and possibly his old stomping grounds in Carolina as potential teams that could afford the 34 year old.

This one is a little off the board and is probably the least likely deal to get done out of this list, but captain Mark Giordano’s time in Calgary is likely drawing to an end sooner rather than later.

Giordano is 37 years old and is set to enter the final year of his contract next season with the Flames, a team that is likely to undergo major changes in the coming months.

Since his Norris Trophy winning season in 2018-19 where he tallied 74 points, it appears as Father Time has finally caught up with Giordano who only has 48 points in the 100 games since.

Coming off his 500th career point, trading the captain and heartbeat of the team wouldn’t likely be popular but could fetch a decent return and would give Giordano a shot at chasing a late career Stanley Cup.

While it’s highly unlikely a first round pick or top prospect would be on the table for the aging defender, a second or third round option isn’t inconceivable in a trade package.

Trying to fit Giordano’s $6.75 million under the salary cap would be a tough proposition for any team, but he could provide guidance to clubs like the Panthers or even the Winnipeg Jets.