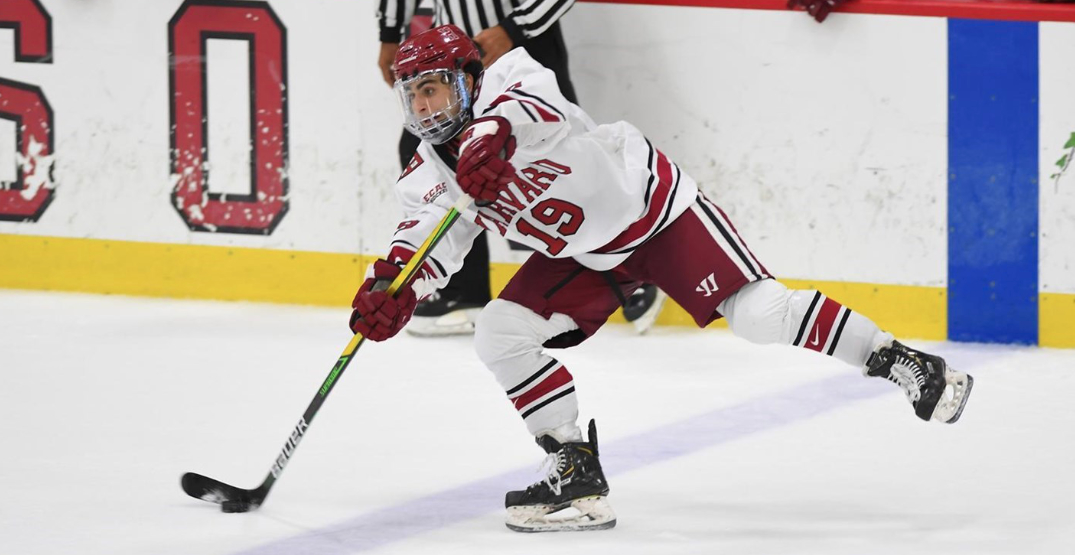 It’ll be a lean holiday season for Calgary Flames fans hoping to get a sneak peek at the next wave of talent coming up the ranks.

Only one Flames prospect, Matt Coronato, was selected to participate in the 2022 IIHF World Junior Championship in Red Deer and Edmonton from December 26 to January 5.

Coronato, the No. 13 pick in the 2021 NHL Draft, will suit up for Team USA squad after cracking the roster Tuesday.

The 19-year-old from Huntington, New York has 12 points (six goals, six assists) in 11 games as a freshman at Harvard University this season, and was the United States Hockey League Forward of the Year after scoring 85 points (48 goals, 37 assists) in 51 games with the Chicago Steel last season.

He’s expected to play a prominent role on the gold-medal defending USA squad. Early combinations have him alongside returning forwards Brett Berard and Matthew Beniers.

Team USA is set to play preliminary round games at Peavey Mart Centrium in Red Deer in Group B with Russia, Sweden, Slovakia and Switzerland. Canada’s preliminary-round schedule in Group A at Rogers Place features Finland, Czech Republic, Germany and Austria.

Coronato wasn’t the only projected player to represent the Flames on the World Juniors stage.

Defenceman Yan Kuznetsov, who represented Russia at the 2021 World Juniors, was surprisingly omitted from his country’s entry into the tournament. Russia opted not to select any North American-based skaters for the World Juniors.

Our roster for the upcoming 2022 World Junior Championship in Canada has been confirmed by the coaching staff!

Click on the following link to find out which players have been picked for the tournament: https://t.co/qThH5bTV9L #RussiaHockey #WorldJuniors pic.twitter.com/qmhp0GD81G

“We were watching Yan Kuznetsov and Daniil Chayka, but we came to the conclusion that the players who have been training with us here in Russia are stronger defensively,” Russia head coach Sergei Zubov said in a statement. “The strongest players have been picked.”

Kuznetsov haș split his season between the Stockton Heat of the American Hockey League and Saint John Sea Dogs of the Quebec Major Junior Hockey League.

He played in all seven games of last year’s tournament.