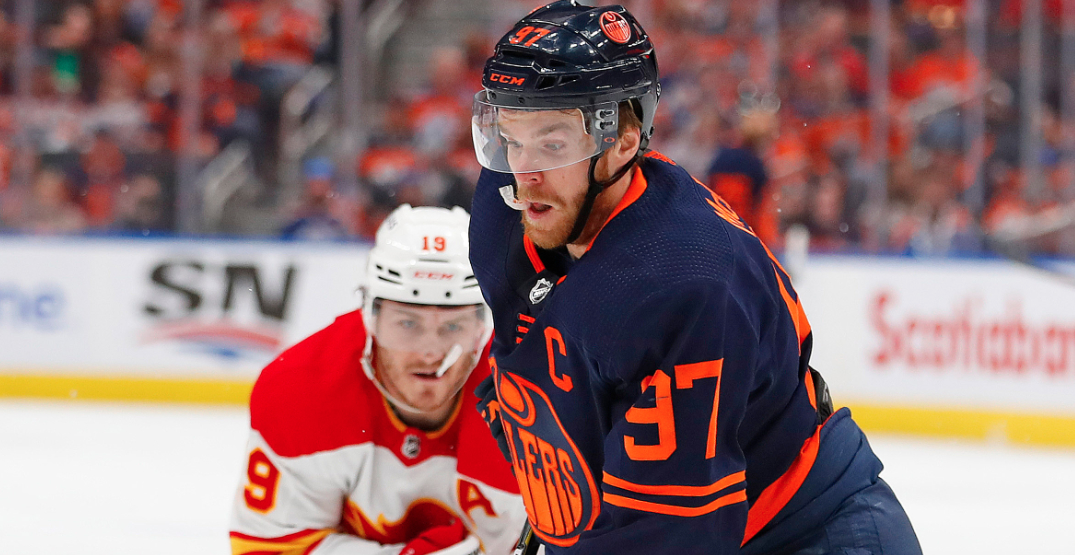 The Calgary Flames find themselves in a bit of a bind when it comes to their second round series against the Edmonton Oilers, and it’s all thanks to “one guy.”

“We’ve let one guy beat us a few nights now,” Flames forward Matthew Tkachuk said after Calgary dropped a 4-1 contest at Rogers Place in Game 3 on Sunday — a score that might’ve flattered his side a little bit.

“Back to the drawing board and figure out a way to stop him next game.

“Pretty much that they’ve got one player that plays half the game and is playing some great hockey right now. We’ve got to find a way to stop that.”

Those north up the QEII might wonder who that one individual was after one, Leon Draisaitl, became the first player in NHL history to net four assists in a single playoff period, and just the fourth in franchise history to net a four-assist game in the postseason.

But it has been one player dishing significant damage all series long.

And there’s no question who that is.

It’s Connor McDavid, who is the only player in playoff history with nine multi-point outings through his first 10 games of a playoff year.

“(McDavid) has been on fire in the playoffs and has taken his game to the next level,” Kane said. “He’s not just doing it on the scoresheet. That’s what is allowing him to really showcase his skill. He is physical, he is involved. he is winning puck battles along the wall, both in the defensive and offensive zones.

“He is a dominant force out there.”

It’s the Oilers captain seemingly rewriting or adding to the record books with every exploit.

“He had another, what, three or four-point night?” questioned Calgary blueliner Rasmus Andersson. “He played really well today and we just have to find a way to stop him together.

The Oilers have a 2-1 series lead.

Edmonton is 18-3 overall when taking such an edge in a playoff series, meaning the Flames are running on fumes when it comes to sorting out the No. 1 pick from the 2015 NHL Draft.

There’s a plan for that, potentially.

Whether or not it’ll be implemented is an answer for Game 4.

But before that, there’ll be nothing but questions.

“I think it more starts from our offensive zone when we’re maybe turning it over or having not the best line changes and letting them gain speed through the neutral zone,” Tkachuk summarized.

“When we get in their zone we’ve got to hold pucks, nothing blind, and get shots to the goalie. That’s where they can have some trouble, with rebounds and lose coverage with that. Just have to have consistent o-zone shifts and not throw anything blind where they can feed their transition.”