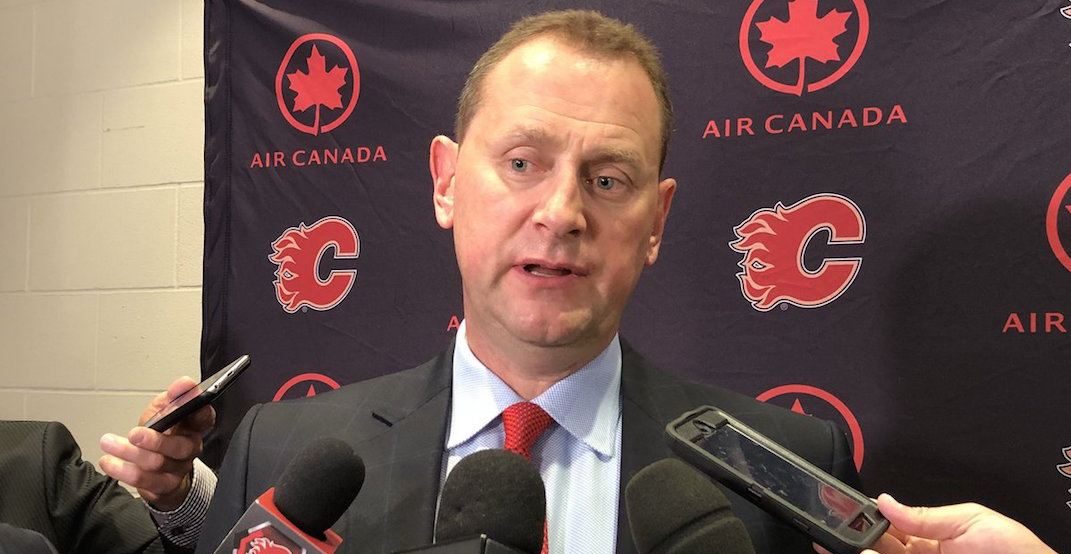 In certain cases these titles are easier to hand out (ie. 2013’s Martin Erat for Filip Forsberg deal), but more often than not it takes years to determine which team came out on top.

Some early speculation has put the Calgary Flames into the latter camp, as their Western Conference foes pulled the trigger on a number of notable names.

Mark Stone to Vegas, Gustav Nyquist to San Jose, Kevin Hayes to Winnipeg, Mats Zuccarello to Dallas, and both Wayne Simmonds and Mikael Granlund to Nashville.

The Flames were dead quiet on Monday, aside from bringing in depth defender Oscar Fantenberg from Los Angeles for a 2020 4th round pick.

No top-six winger, no backup goaltender, no notable extra piece for Calgary’s impending run to the playoffs.

General manager Brad Treliving was unwilling to part ways with his most prized assets and it’s categorically the right move.

Speaking with the media in New York City on Monday, Treliving said going into the deadline they were fine with keeping their current roster in tact.

“Our plan all along was probably [that] we were going to be standing pat,” said Treliving. “So, this is not a disappointing day at all, we like our group. If we can give them more great, but it wasn’t at all cost.”

That cost was rumoured to be exorbitant.

For weeks, the Flames have been linked to a handful of players out of the Eastern Conference including both Mark Stone and Kevin Hayes.

Sportsnet’s Pat Steinberg reported Ottawa’s ask for Stone in the days leading up to the deadline included multiple first round picks, a top tier defensive prospect, and another piece.

Sense is Sens starting point is multiple 1sts + one of Valimaki, Andersson, Kylington + more. Calgary extremely happy with current group. Not willing to sell the farm.

As for Hayes, he fetched a first round selection out of the Jets, along with forward Brendan Lemieux, and a conditional fourth round pick in 2022.

Calgary likely would have had to give up either Juuso Valimaki or Rasmus Andersson, both players the Flames have put a lot of time in developing to get to the NHL level.

Bottom line is this — Mark Stone clearly wasn’t coming without an Andersson or Valimaki going the other way. I also believe CGY wouldn’t have been able to re-sign him (8×9.5M is evidence), so, were you really willing to pay that price for a pure rental? Team is still good #Flames

Trading either would have helped the Flames in the short-term, but would have carpet bombed their defensive cupboard, especially after trading Adam Fox this past summer.

Though the Golden Knights didn’t have to give up a first round pick to acquire Stone, they did have to send back Brannstrom who is one of the most promising young defensive prospects in the NHL.

Calgary would have almost certainly have had to let go of their 2019 first round pick, which would have been the second straight year of doing so.

Already without the second and sixth round picks in the upcoming draft, the Flames couldn’t afford to part with more of their top round selections after waiting until the fourth round last year.

“We’d love to have certain people,” Treliving added. “But, to me you have to show restraint at this time of the year. Going into this weeks ago, we talked about things we were not going to do and when you change that at 2:45 [pm], that’s not the right way to do business.”

Make no mistake though, the already wide open Western Conference race got a lot more crowded on Monday.

That has the Flames looking around to their neighbours, knowing they’ll have to deal with more potent attacks in the regular season and likely playoffs as well.

However, Treliving said they can’t base their decisions off of what their rivals with wildly different spending models are bringing in.

Calgary’s window is just opening with the majority of their core, aside from Giordano, entering their mid-to-late twenties.

After not finishing higher than 15th in the last decade, #Flames sit second overall with a core that is predominantly young and locked up (or will be soon — Tkachuk). Four d-men are 22 and under. Best team since 1989.

A long, bright future awaits, yet so much fan outrage today.

Would a second-line winger or a backup goaltender have been a nice add for the Flames?

Sure, but seeing the price tag other teams around the league paid for some of the players on the market, it’s not hard to see why it made sense for the Flames to keep their picks and prospects this time around.

At the end of the day, the Flames are still in top spot in Western Conference and can consider themselves Stanley Cup contenders thanks to the current 23 players that make up the team’s roster.

“The hearse is not driving by and none of us are climbing in. We’re pretty excited about our team.

“The fact that we wake up, I’m going to have a cold beer right now and still have guys like Valimaki in our organization, that’s a pretty good day.”