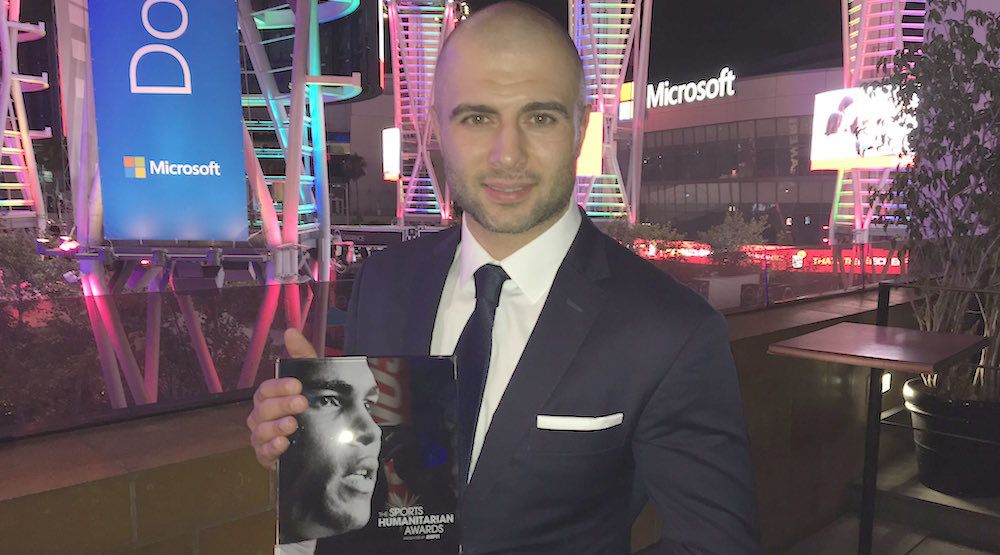 Sports fans across North America now know what Calgary has known for a while.

The Flames captain was recognized for his work in the community and dedication to charitable causes on Tuesday, winning the ESPN Muhammad Ali Sports Humanitarian of the Year Award.

The award is given annually to an athlete “whose continuous, demonstrated leadership has created a positive impact on their community through sports.”

The 11-year veteran defenceman has played his entire career with the Flames and has been the team’s captain since 2013. He founded the Team Giordano program in 2014, which has distributed $300,000 in resources to four high-needs schools in Calgary.

Mark and wife Lauren make regular visits to the schools, talking to students about fitness, leadership, academic success, and goal-setting.

“It was really special, right from the start – watching the video of Muhammad Ali and then being able to win the award at the end of the night, I’m truly honoured,” Giordano said. “It’s a pretty emotional night, pretty surreal for me right now.”

This isn’t the first time Giordano has been recognized for his work in the community. He won the NHL Foundation Award last year and was named a finalist for the Mark Messier Leadership Award this year.

Your captain, the @ESPNCitizenship Muhammad Ali #SportsHumanitarian Of The Year.

Today, Gio will be recognized at the @ESPYS! pic.twitter.com/V6jVTbzWKE

Giordano will also be recognized at tonight’s ESPY Awards (6 pm MT on TSN), the annual sports awards show put on by ESPN in Los Angeles.