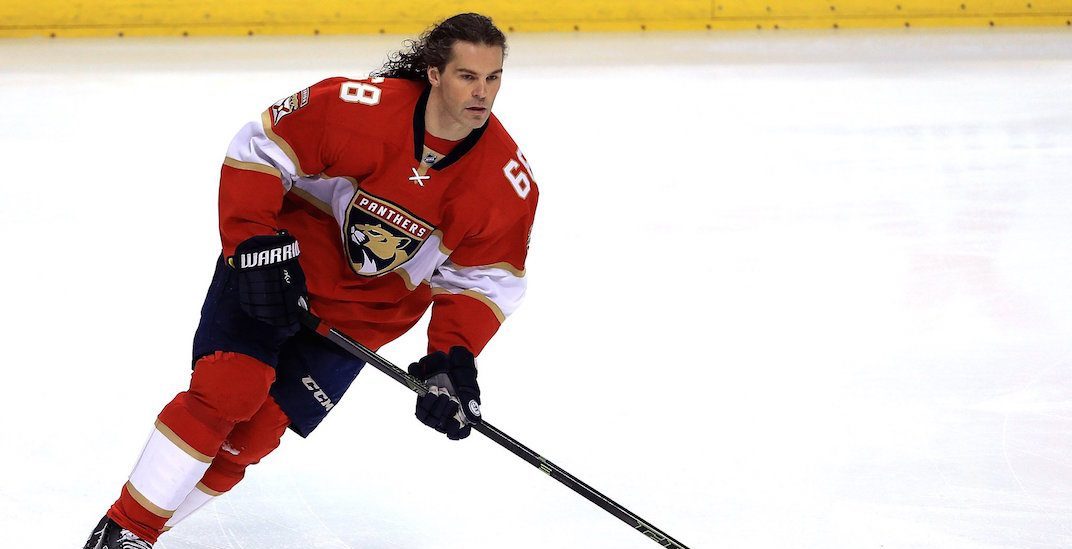 It’s happening… it’s actually happening. The man, the myth, the mullet, Jaromir Jagr is reportedly set to join the Calgary Flames, signing a one-year $1 million plus $1 million in potential bonuses.

While Jagr isn’t anywhere close to the superstar he used to be in Pittsburgh, Washington, and New York, this is an absolute home run for the Flames organization.

Forget Jagr’s career 765 goals and 1,914 points, both of which rank only behind Wayne Gretzky, posting almost 50 points at his age is beyond impressive.

Last year with the Florida Panthers, the 45-year-old showed off his durability by appearing in all 82 games, while also scoring 16 goals and 46 points.

It’s unlikely he’ll challenge Johnny Gaudreau or Sean Monahan for the team scoring title, but anywhere close to his 46 points for a $1 million cap hit is extraordinary value.

Signing players just before the season isn’t a new technique for Flames GM Brad Treliving, as he inked Kris Versteeg on a one-year contract just before the 2016-17 season after his try-out with the Edmonton Oilers.

For the Flames, the Jagr signing isn’t just a smart PR decision, but could also be one of the free agent steals of the off-season.

Look, I just tell my cat, there is a chance to play in NHL this year. 😀😀😀 pic.twitter.com/8iBoTYeEl7

It’s likely Jagr will start the season on Calgary’s third line, which is currently projected to feature Versteeg on left wing and Sam Bennett down the middle.

With Bennett taking a step back in point production in his sophomore season, working alongside an NHL legend like Jagr could be the spark the young centreman is looking for.

However, there is the potential for movement within the Flames lineup for Jagr, with spots on the second line and even top-line minutes potentially available.

Aside from Michael Frolik, Calgary doesn’t have many proven talents on the right side to produce points at the rate of star players like Gaudreau and Monahan.

Michael Ferland developed great chemistry with the ‘dynamic duo’ in the second half of last season, but is known more as a bruising power forward than his offensive abilities.

It was a tumble down the depth chart for Troy Brouwer last year, starting the season on the top-line before being limited to bottom-six minutes for the stretch drive and playoffs.

And, Curtis Lazar is the biggest wildcard of them all with top-six potential, but hasn’t yet been able to convert his first-round pick status in the NHL.

Coaching Jagr while with the Dallas Stars organization in 2012-13, Flames bench boss Glen Gulutzan likely won’t be skittish to play with his lines and find the best possible chemistry for the former all-star.

While his on-ice contributions will probably somewhere between 35 to 40 points, Jagr’s presence in the locker room could be an even bigger benefit for Calgary.

Ten current Flames weren’t even born when Jagr won his first Stanley Cup with the Pittsburgh Penguins in 1991, essentially turning the vet into the ‘dad’ of the dressing room.

If Jagr is able to stay healthy and maintain his spot in the Flames lineup, it’s more than possible he breaks that lofty record wearing the flaming ‘C’.

There could be some drawbacks for the Flames however, as the pending signing of Jagr will move a few players down the depth chart that otherwise would have seen more playing time.

Brouwer is the top candidate to see a drop off in ice time, though Lazar and Mark Jankowski could see their minutes decreased as well.

It’s also not a sure bet that Jagr will continue to be a productive, reliable scorer in his upcoming 24th NHL season.

This could be attributed to a weaker Panthers team that was decimated by injuries last year, but it’s very possible that Jagr’s age is starting to catch up to him.

That didn’t seem to bother the Flames however, as the beat out the St. Louis Blues for the Czech legend’s services.

Inking a player like Jagr’s calibre to a cheap, cost-effective deal just days before the season should be counted as a major win for Calgary.

Jagr playing third-line minutes likely won’t be the difference between contending and missing playoffs, but it’s a smart move that gives the Flames that much more firepower to battle teams like Edmonton and Anaheim in the Pacific Division.

It will be interesting to see if this is where Jagr ends his storied NHL career, but at least there will be plenty of number 68 jerseys sold by the Flames in the meantime.