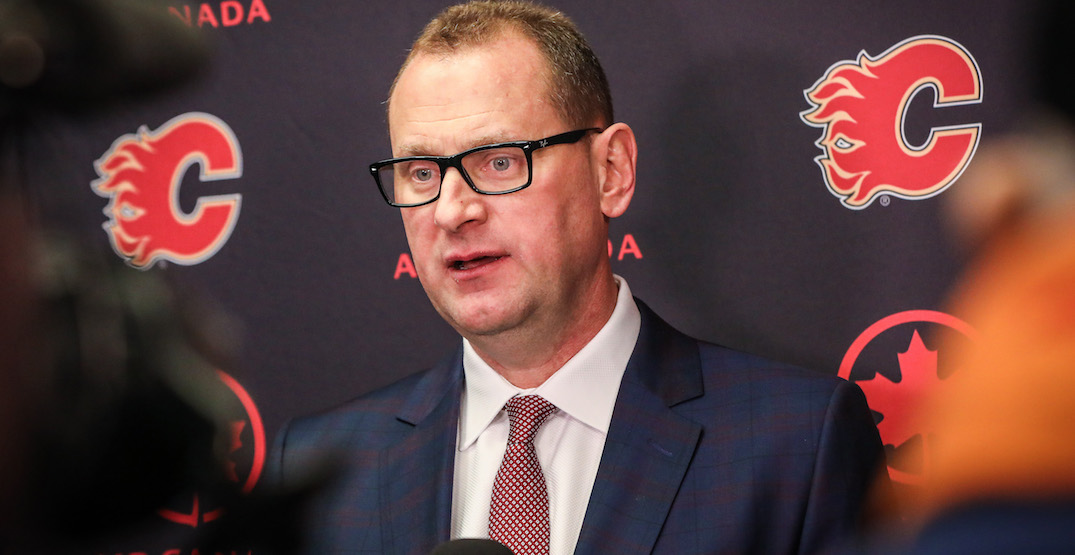 After another lacklustre game against the Vancouver Canucks on Wednesday — a 5-1 loss on home ice — the heat is seemingly on just about every member of the Calgary Flames right now.

The Flames are currently 8-7-1 through the first 16 games of the season, sitting two points behind the Winnipeg Jets for the last playoff spot in the North Division. But it’s not so much how their record looks, it’s about how they’ve looked on the ice.

They haven’t lived up to expectations thus far, as inconsistent play hasn’t matched the talent they have on paper. After the Flames’ last loss to the Canucks, head coach Geoff Ward questioned the team’s attention to detail as well as their compete-level.

“It’s time for us to start giving a shit about it,” he said.

On Friday it was general manager Brad Treliving’s turn to speak up, going on The Big Show on Sportsnet 960. Speaking with Pat Steinberg, Will Nault, and Peter Klein, Treliving owned his team’s play through 16 games, expressing frustration with how they’ve performed thus far.

“We’ve been a very inconsistent team that is not getting top performance throughout our group,” said Treliving. “We’ve had inconsistent play from the majority of our [players], which sums up a team that’s not good enough right now.

“And record aside, the focus, to me, is always on what leads to the result. At the end of the day, we’re in the results-oriented business, but it’s the focus on doing things right every day — working to maximum effort, executing to optimal levels, and focusing on all those details. If those are in place, you’re going to be more happy than not with the end result.

“Our focus needs to be in being hungry in a lot of areas, in our preparation, in our process, and then we’ll get the result we want. But overall through 16 [games], we’re inconsistent and it’s just not good enough yet.”

On paper, the Flames should be one of the top teams in the division. They have a talented top six forward group, with the luxury of being able to play Matthew Tkachuk and Johnny Gaudreau on separate lines. Their bottom six is deep, highlighted by two-way centre Mikael Backlund, and they have good depth on defence as well. And unlike much of the team’s recent history, their goaltending has been excellent, with Jacob Markstrom stabilizing the position.

“If there’s criticism out there, and I’m sure there is, it’s well earned,” said Treliving.

“Areas of our game that I think should be up for criticism are execution, our consistency or lack thereof, digging into the guts of the game on a more regular basis, and regularly paying a price to win. Winning hurts… Winning teams have a way of accepting and embracing those things and when you go through challenging times, the easiest thing is to get right back to the basics.”

Treliving did push back at the suggestion that they don’t care enough.

“There’s this narrative that gets brought up – I think it’s a bullshit narrative – that people don’t care. If that narrative’s out there, it’s wrong and it’s a lazy narrative.”

Treliving said he believes in his team, but it’s clear from his comments that his patience is wearing thin. This team is built to win right now, and they need to start doing it on the ice.

And if they want to show they care, they’d better do it in the next two days, in two straight games against the Edmonton Oilers.