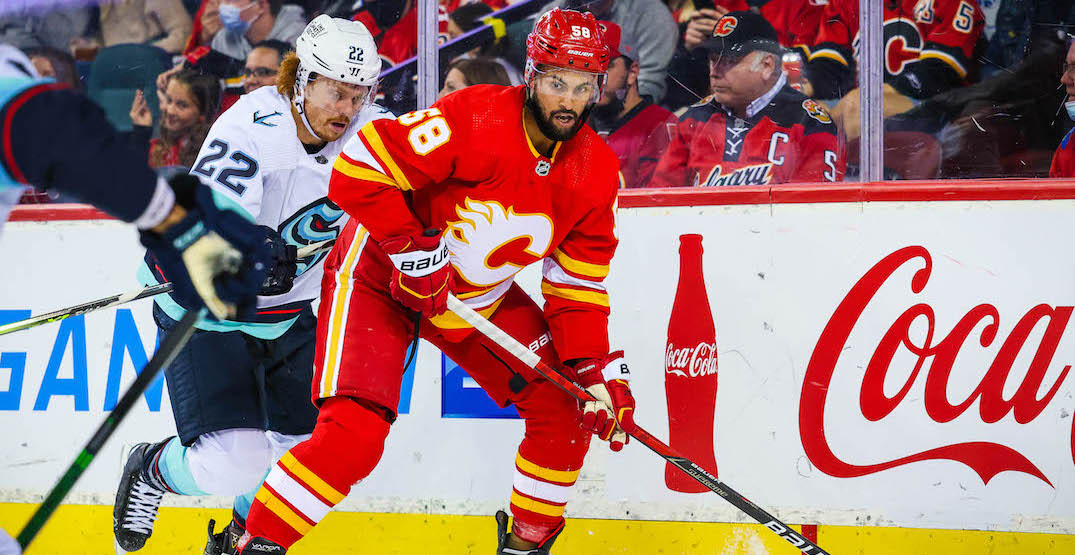 Over half a decade has passed since Calgary Flames general manager Brad Treliving grabbed the mic on the floor of the 2015 NHL Entry Draft’s second round.

He had already snagged future top-four defender Rasmus Andersson with the 53rd overall pick and was now about to make his second selection of the round at pick 60.

Treliving went with a defenceman who was once considered a first-round talent that had fallen into his lap in Swedish blueliner Oliver Kylington.

Fast forward six years and the smooth skating defenceman who was once considered the top European prospect in the 2015 draft class has played a grand total of 95 career NHL games.

Kylington is a fascinating player for the Flames, never establishing himself as an everyday NHL player while possessing some of the most desirable raw talents on the roster.

At this point, based on their body of work this training camp and pre-season, I don't see how Oliver Kylington or Glenn Gawdin heads to Stockton next week. #Flames

Kylington is a prime candidate to break out of his healthy scratch status which plagued his 2020-21 season and finally become the blueliner the Flames have envisioned him as.

While that option is absolutely preferable for the club, the other consideration will have to be giving the lanky rearguard a fresh start.

There’s nothing if not opportunity in Calgary for Kylington to make an impact as one of the smoothest skating defencemen in the Pacific Division.

With former captain Mark Giordano nabbed by the Seattle Kraken in this summer’s expansion draft, his significant minutes will have to be allocated elsewhere.

Incoming blueliners like Nikita Zadorov and Erik Gudbranson will likely take up their fair share of playing time as true Darryl Sutter type acquisitions over the course of the off-season. Though Kylington, Juuso Valimaki, and Connor Mackey are knocking on the door to move into top-four roles as the season rolls along for Calgary.

Kylington has done nothing but wow in the pre-season for the Flames, playing over 25 minutes in one contest so far and showing excellent puck possession abilities.

His advanced metrics in Calgary’s exhibition contests are some of the best on the team, contributing 1.84 expected goals for which ranks fifth on the club and third when it comes to defencemen.

That combined with only a 0.78 expected goals against has Kylington slotted in as the second-most productive Flames player in the pre-season, trailing only Johnny Gaudreau.

Even from the eye-test perspective, Kylington has taken major strides both literally and figuratively when it comes to his defensive positioning and collecting loose pucks.

His chemistry early on with Chris Tanev has been fun to watch and will likely be in the mix to join Tanev, Andersson, Valimaki, Noah Hanifin, and Zadorov as everyday NHL’ers.

If Kylington is unable to lock down a full-time spot on this year’s Flames roster, it may be time to move on from the former second round pick to give him an opportunity in a fresh market.

While the Swede has looked exceptional in pre-season action, he did only play in eight games with Calgary last year and hasn’t played more than 60 games in a season at any level since 2018.

Especially considering Kylington will have arbitration rights as a restricted free agent, Treliving could strike now to trade Kylington at a relatively high value.

Calgary has some holes when it comes to depth on both forward and defence, and there would likely be more than a handful of teams who would be willing to submit offers on the left-shot defender.

It also depends on if Valimaki, Mackey, or even a Michael Stone begin to eat away at Kylington’s minutes to start the season which would result him being pushed down the Flames’ depth chart even more.

Kylington was put on waivers to start last year with Calgary as a member of the team’s taxi squad and there were no takers at that point, but with a better projection of the league’s salary cap this year could make a move easier to facilitate.

Ultimately, the clock is ticking on Kylington to prove that he is ready to play a full 82-game season in the NHL, as well as the Flames to make a decision one way or another.

For all parties involved, the best case scenario would be for Kylington to crack the top-six defensive core right out of camp and become the player he was projected to be.

If that doesn’t happen though, it may be time to evaluate his future and role within the Flames organization.