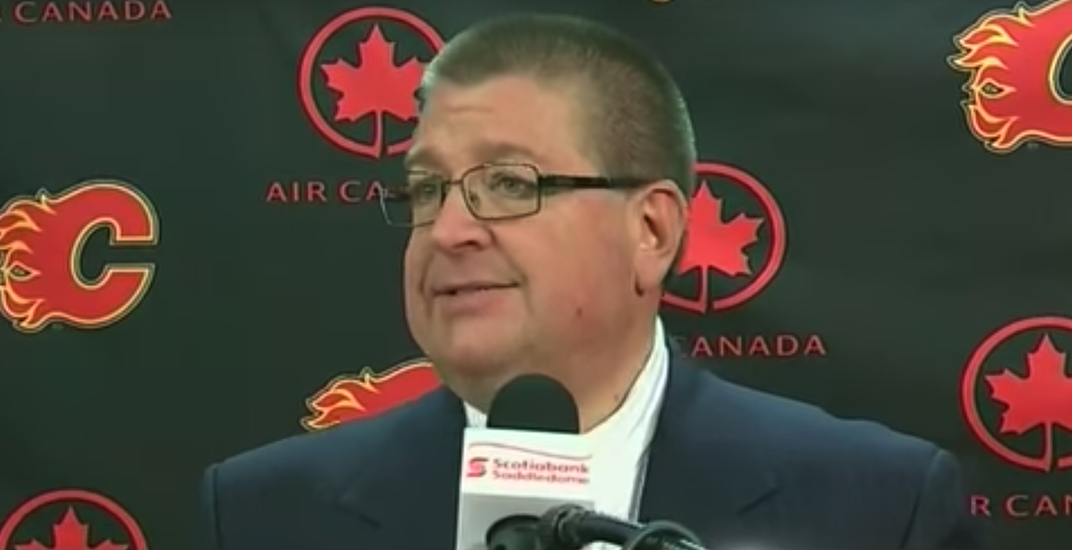 It’s hard to believe, but another decade of Calgary Flames hockey is set to come to a close in just a few weeks.

The 2010’s provided a number of indelible moments from the final years of Jarome Iginla’s tenure in Calgary to a pair of kids named Johnny Gaudreau and Sean Monahan taking over as faces of the franchise.

Over the next few weeks, we’ll take a dive back into the previous 10 years and how they’ve shaped this year’s Calgary Flames roster.

But before we get to the good, we have to talk about the bad.

Between draft busts and risky signings to scandals that caught the attention of the entire National Hockey League, here are the 10 worst Flames blunders of the past decade.

We begin on a fiery, but relatively light-hearted note involving former Flames head coach Glen Gulutzan and a practice at the Scotiabank Saddledome in early January 2018.

Despite Calgary enjoying a two-game win streak to kick off the new year, Gulutzan wasn’t pleased with his team’s focus the following day. Gulutzan took exception and threw his stick into the top row of the lower bowl in a clip that made its rounds throughout the NHL.

The moment of frustration seemed to spark the Flames as they pulled out a 3-2 victory over the Anaheim Ducks, however a 37-35-10 record wasn’t enough for Gulutzan to save his job as he was fired that April.

Since it was established almost 40 years ago, the Calgary Flames Charity Golf Classic has become the organization’s biggest single-day fundraiser for local charities.

The 2012 edition of the tournament made headlines however, as the Flames announced none of their players would be participating in the yearly tradition due to the pending 2012-13 lockout.

A key NHL Player’s Association meeting was scheduled to take place on the same day in New York and despite only a handful of Flames originally committing to the meeting, the entire roster elected to withdraw from the tournament.

This sparked plenty of anger from fans and resulted in one sponsor pulling out of the tournament, though the next day 10 players who weren’t travelling to New York told the Flames they would take part.

Okay… I’ll admit that this one is slightly cheating.

At the 2009 NHL Draft, the Flames used their 23rd overall pick to select defender Tim Erixon out of Sweden ahead of future NHL mainstays such as Marcus Johansson, Kyle Palmieri, and Ryan O’Reilly (we’ll get to him in a bit).

Erixon was considered one of Calgary’s best prospects through the early 2010’s, however the Swede refused to sign with the Flames believing he would not immediately crack the team’s 2011-12 roster.

After seeing Erixon turn down his maximum offer, newly-hired Flames GM Jay Feaster moved the blueliner to the New York Rangers in exchange for Roman Horak and a pair of second round picks with Erixon never playing a game in Calgary.

In a frustrating twist of fate, one of the most exciting signings in Calgary Flames history ended with a whimper in what became the final chapter of Jaromir Jagr’s incredible NHL career.

Calgary signed the 46-year-old Jagr just before the start of the 2017-18 season, just months after he passed Mark Messier for second all-time in NHL scoring with 1,888 career points.

Within his first few games with the Flames it was clear his game had taken a substantial nosedive, even from his 46-point campaign with the Florida Panthers the year prior.

A bottom-six role on the team and injuries plagued the Czech great over 22 games in Calgary, eventually being waived by the club less than four months after signing his one-year deal.

Since Miikka Kiprusoff’s retirement in 2013, Flames fans have received whiplash from the various goaltenders trying to take his place between the pipes.

Entering the 2017 playoffs against Pacific Division-winning Anaheim, the Flames were riding a goaltending tandem of two-time all-star Brian Elliott and backup Chad Johnson.

Calgary found themselves trailing 3-0 in the best-of-seven series after a number of Ducks comebacks, including Elliott and the Flames blowing a late 4-1 lead in Game 3 to fall 5-4 in overtime.

Despite mounting speculation that he would opt for Johnson in a must-win Game 4, Gulutzan went with his usual starter in Elliott who allowed an early bad-angle floater and was subsequently pulled by Gulutzan in what ended up being a 3-1 Ducks series clincher.

Following the 2012-13 lockout, Flames GM Jay Feaster tried to make a splash and land one of the league’s most enticing young players in a move that could have sunk the franchise.

As the Colorado Avalanche dealt with an unhappy Ryan O’Reilly, Feaster attempted to snag the 22-year-old restricted free agent with a two-year, $10 million offer sheet which Colorado matched.

That proved to be a blessing in disguise for Calgary as O’Reilly was in the middle of a holdout with Colorado and had played in two games in the KHL after the shortened NHL season had started, meaning he would have required waivers.

So, it’s fair to say Calgary not only would have lost their first round pick (which ended up as Sean Monahan) but O’Reilly as well had the Avalanche not matched.

He’s been dubbed as one of the biggest free agent busts in Flames history, but when Calgary inked James Neal to a five-year, $28.75 million contract in the summer of 2018 it looked like a slam dunk.

Coming off back-to-back Stanley Cup Finals appearances with Nashville and Las Vegas and his 10th consecutive 20-goal campaign, it seemed as though Neal would slot neatly into Calgary’s top-six.

Neal became the team’s whipping boy through the 2018-19 season recording career lows in goals (seven) and points (19) and being healthy scratched before Calgary’s Game 5 do-or-die tilt against Colorado.

GM Brad Treliving ended up trading his star signing just one year into his deal to Edmonton for Milan Lucic, who has yet to record a goal in 27 games compared to Neal’s 14 goals for the Oilers.

Following the firing of Gulutzan after the 2017-18 season, Treliving hired former Carolina Hurricanes bench boss Bill Peters after the pair worked together at the 2018 IIHF World Hockey Championships.

Peters guided Calgary to their best season in 30 years in 2018-19 finishing as the top team in the Western Conference with 107 points, however that all came crashing down in late 2019.

Corroborated accounts of racial slurs and physical abuse by Peters prior to his time in Calgary rocked the NHL, resulting in Peters resigning from his position as the team’s head coach.

The NHL is continuing their investigation into Peters’ transgressions and further league action or legal consequences could still be on the way.

When Dennis Wideman stepped onto the ice on January 27, 2016, he was in the midst of his fourth season on the Flames blue line.

During a game against the Nashville Predators however, he would steal headlines after cross-checking linesman Don Henderson from behind after sustaining a hit from Nashville’s Miikka Salomaki.

Henderson would suffer a concussion on the hit and has not officiated an NHL game since, while Wideman was handed a 20-game suspension from the league, though that was later decreased to 10 games.

Wideman played one more season in Calgary before being released by the team, while Henderson had launched a $10.25 against the former Flames defenceman which at last report in 2018 had been set aside by a judge to be settled by the NHL.

Jarome Iginla is still revered as the greatest player to ever wear a Flames sweater, however his final years in Calgary were plagued with trade rumours.

Year after year out of the playoffs, Flames management chose to hold onto their superstar as Iginla’s trade value began to decline before the team reached an impasse ahead of the 2013 trade deadline.

On March 27, Feaster pulled the trigger on the biggest trade in franchise history sending the 11-time 30-goal scorer to the Pittsburgh Penguins in exchange for college prospects Kenny Agostino and Ben Hanowski and a first round pick.

In all, Calgary gave away Iginla for relatively nothing with the return of Agostino, Hanowski, and Morgan Klimchuk playing a combined 27 career games for the Flames.