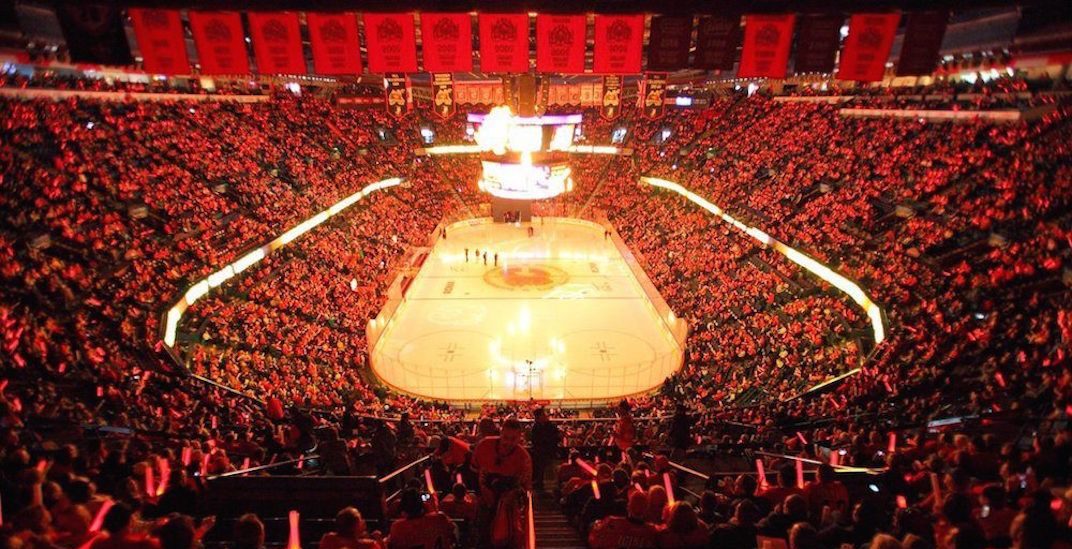 An often celebrated day for the Calgary Flames with their annual Charity Golf Classic was quickly sullied on Tuesday night with a bombshell from Flames president and CEO Ken King.

Speaking alongside NHL commissioner Gary Bettman, King announced the Flames would no longer be seeking a new arena deal after talks with the City of Calgary stagnated.

Both King and Bettman were vague with their statements about why discussions ended so abruptly after years of consultations, but their tone seemed to indicate that the Flames’ future in Calgary might be jeopardy.

This of course came on the same day as a $660 million deal to overhaul Seattle’s KeyArena, in the hopes of attracting NBA and potentially NHL interest.

Make no mistake, this announcement from the Flames and Bettman was meticulously calculated.

Flames players had not yet arrived for the start of training camp, the Flames statement lined up with the Seattle announcement, and of course we’re into the start of a mayoral election campaign in Calgary.

More than anything, this declaration from Flames ownership is a move trying to force the arena situation into an election issue five weeks ahead of the vote.

Bettman: "At some point there will be consequences that will have to be dealt with."

You can’t help but think back to a very similar situation involving an Albertan NHL franchise in 2012, when the Edmonton Oilers were looking to finance their Rogers Place project.

In that instance, Oilers owner Daryl Katz flew down to Seattle and began ‘investigating’ arena options in that city.

Of course, relocation of the Oilers never came close to happening and a deal was reached for the City of Edmonton to cover $351 million of the final $448.5 million price tag.

Once again, we have a situation of a billion dollar ownership group trying to strong arm a city council and are essentially holding a fanbase hostage during these negotiations.

While it was never outright stated by either King or Bettman this week, the feeling is essentially ‘pay up or we’ll start packing our bags.’

Is there more of a risk of the Flames relocating today than compared to a week ago?

Does that mean Johnny Gaudreau and Sean Monahan will be dressing for the Seattle Flames sponsored by Starbucks in the near future?

This move is political posturing at its finest, and Flames brass would be crazy to leave such a stable NHL market.

Calgary has ranked in the top 10 in NHL attendance for over a decade, with many of those years coming with no playoffs and a rough Alberta economy.

If the Flames were to pack up their gear and move to Seattle or otherwise, it would undoubtedly be the easiest expansion or relocation back to Calgary in NHL history for someone wanting to purchase a team.

Now this doesn’t mean the City of Calgary gets off scot free, as they should assume a piece of the blame for why we’re at this stage.

While the CalgaryNEXT project was an extremely costly proposition, the Victoria Park plan to construct a new arena next to the Saddledome seemed to be a reasonable request in terms of both cost and location.

There is also the issue of Calgary considering an Olympic bid for 2026, which would need at least two professional-grade ice surfaces in the city.

If a deal for a new arena isn’t reached in the next few years, it’s very likely that Calgary will be taken out of the running for hosting the 2026 Games.

Whether Calgary residents like it or not, if a new arena was to be built, a sizeable portion would likely come from taxpayer contributions.

Over the last decade, Rogers Place in Edmonton, Videotron Centre in Quebec City, Tim Horton’s Field in Hamilton, TD Place in Ottawa, Investor’s Group Field in Winnipeg, and BMO Field in Toronto were all financed in part from public money.

While it’s true the Air Canada Centre in Toronto, Bell Centre in Montreal, Canadian Tire Centre in Ottawa, and Rogers Arena in Vancouver were all privately funded, all were built at least 18 years ago in a very different economic environment in the 1990’s.

It’s not unreasonable to expect billionaire owners to pay for their own arena projects, and it probably makes the most sense from a community financial outlook.

I’m just saying don’t hold your breath that the Flames’ consortium of owners will ignore the precedent of more recent arena and stadium projects across the country.

So, where do we go from here?

It’s tough to say, and will likely be a big point of contention ahead of the October 16 municipal election in Calgary.

In my mind, the most likely scenario is along the same lines of what happened in Edmonton with both sides butting heads until a one-third (City), one-third (Flames), one-third (ticket tax) deal is worked out.