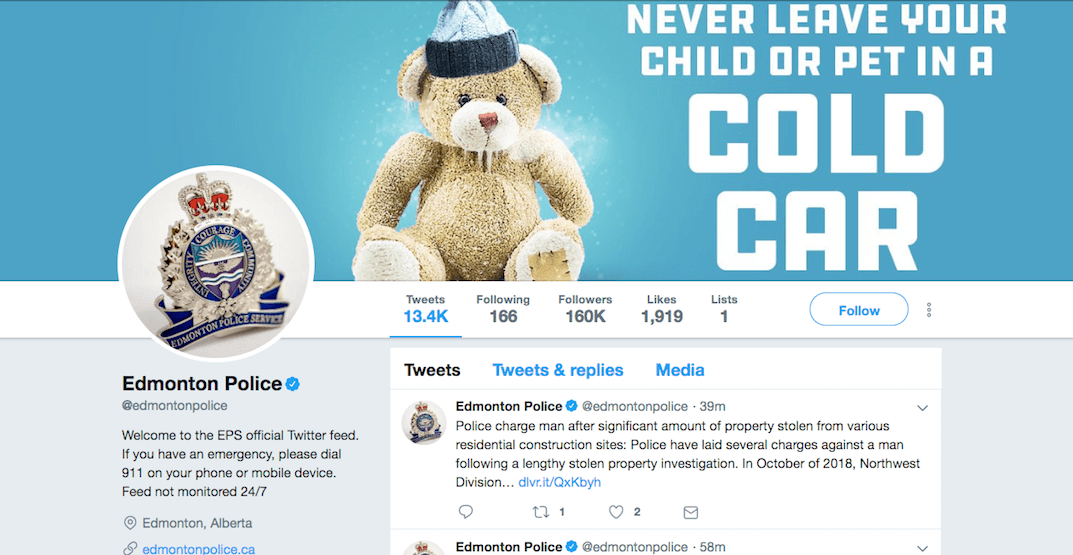 Most people see their local police as a strict and serious arm of the law, but every now and then it’s nice to see that, behind the badges and bullet-proof vests, they’re actual people, too.

There’s no better opportunity for police departments to let that personality shine than through their social media accounts, and while law enforcement is usually not a laughing matter, a few accounts manage to hit the mark when they get the chance.

One such account is that of the Edmonton Police Service, which has a habit of writing short poems, quoting dated songs, and making the occasional – and hilarious – pop-culture reference.

They were at it all through December, with plenty of holiday-related songs and references sprinkled thoughout the month.

There is no need to be Tonya Harding and do a triple axel. Not this afternoon at least. The roads are slick, so take extra precautions when driving. #yeg #yegpolice #yegtraffic

“If you’re dashing through the snow in a one-horse open sleigh. Make spirits bright by taking a sober ride home every night.” Whether you are drunk or high, remember, the same rules apply. Please don’t drive a vehicle if you are impaired. Read more here: https://t.co/uPUyIOV3kn pic.twitter.com/BB8g2iWKOv

Here’s how they reminded people not keep their valuables safe while shopping:

Everything in your car is valuable, especially when you are Christmas shopping. Even if you have an alarm installed, NEVER leave anything in your vehicle. A mysterious fox might come and swipe your stuff. #yeg #yegtraffic #yegpolice #autothefthttps://t.co/banEAGmfZO

“We don’t want a lot for Christmas
There is just one thing we need
We don’t care if you drink at events
Or even smoke a little weed
We don’t need to hang a stocking
There upon the fireplace
Edmonton, won’t you make us happy
With a sober ride home on Christmas Day”#yeg pic.twitter.com/yqkIuiKXN9

Not to mention their classic pop-culture references:

It’s important to keep your stuff safe so Oceans 11 doesn’t execute a heist on your vehicle. Lock your doors and remove your valuables. It can’t be stolen, if they can’t see it. #yeg #yegtraffic #yegpolice

Looks like Mr. Freeze left Gotham and made a pit stop in #yeg last night. Between 8 p.m. yesterday and 8 a.m. this morning a total of 55 collisions were reported to the Edmonton Police Service. Whether it’s ice or snow, please slow down and drive to road conditions. #yegtraffic

It looks like Frozone found his super suit in Edmonton. The roads aren’t incredible around the #yeg area, so please, if you must be out, be cautious and give yourself extra travel time. #yegtraffic

The Edmonton Police Service does have some competition, however, as the York Regional Police’s Twitter account has had a few gems:

SANTA SIGHTING: Officers in Air2 have confirmed that #Santa has entered York Region air space. He is travelling northbound above Yonge Street, just south of 16th Avenue. But, if you see anyone other than Santa squeezing down your chimney tonight, call 9-1-1.

PRECIOUS CARGO – Officers noticed this three-pound stash within reach of a driver in #RichmondHill last night. Sorry sir, but your passenger is going to be coming with us. #Cannabis #YRPTweetsFromTheStreets pic.twitter.com/DAzKtPFeWv

And, of course, there are the times when police Twitter accounts are accidentally hilarious, like what happened a few Decembers ago for the police in Toronto:

The original tweet had stated that a naked male was being pursued by police near Woodbine Station, but the account had to make a correction as the man wasn’t completely naked…

Good on these accounts for having a sense of humour, even when dealing with such dangerous – and adult – daily subject matter.