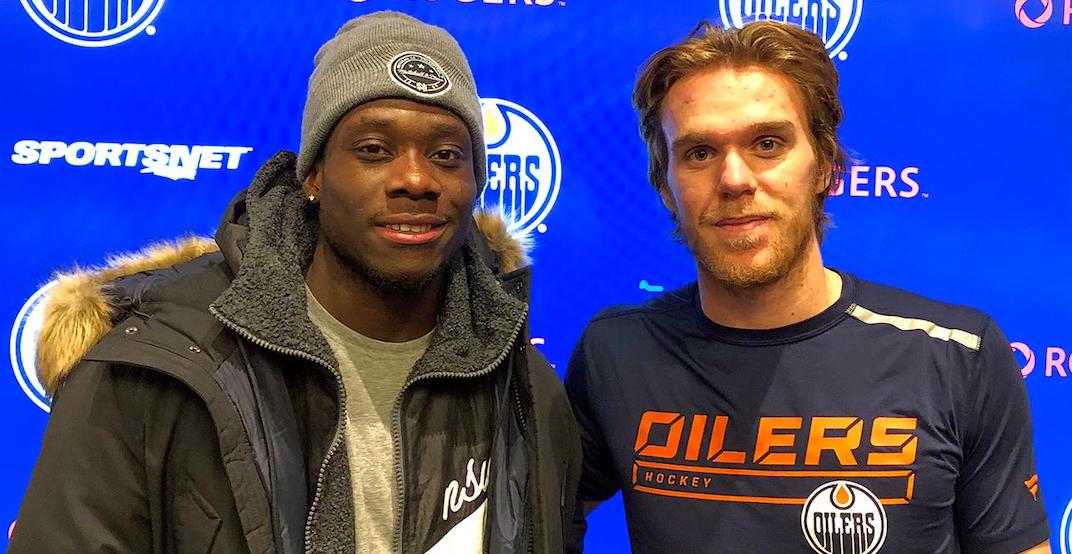 The Edmonton Oilers and Calgary Flames face off for the first time this season, and tonight’s game will recognize a special guest.

Nineteen-year-old Canadian soccer star Alphonso Davies, who is now a midfielder for FC Bayern Munich, will make his return home tonight for the Battle of Alberta.

The former Vancouver Whitecaps player, who is known for his highlight-reel goals, will be recognized by the Oilers on Friday, performing the ceremonial puck drop prior to the game between the Oilers and the Flames.

Davies grew up in Edmonton and played for the Edmonton Strikers Soccer Club before joining the Vancouver Whitecaps program at age 14.

According to Davies, this will be his first NHL game in his home city.

Speaking to the media in the Oilers locker room Friday, Davies said he “tried hockey for about a week” after arriving in Edmonton but much preferred the warmth of the soccer pitch to frosty arenas.

“Edmonton is home. My family & friends are all here so I’m excited to be back.”

Hear from @FCBayern & @CanadaSoccerEN midfielder @AlphonsoDavies as he speaks ahead of being a special guest at tonight’s #Oilers vs. Flames game ⚽️ pic.twitter.com/MJzAQjHPfP

Tonight’s game also marks the first time the two teams have played in 265 days, and their first matchup of the season is expected to keep the Albertan rivalry alive and well.

The puck drops at 7 pm MST.